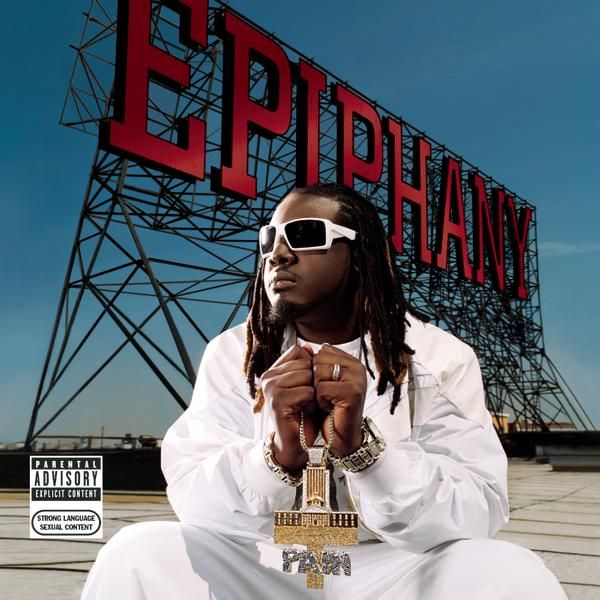 T-Pain returns with his second album titled Epiphany. T-Pain has made a huge splash in the music industry since his huge smash “In Love Wit a Stripper”. While his music still dangles between Rap and R&B, it’s hard to put his music in a certain genre. We may not know what genre his music is, but one thing that you can say about his music is this, it is catchy. How many times have you caught yourself singing one of his hooks? After a year where Akon and T-Pain flooded the market, can T-Pain shake the sophomore jinx?

The album starts off with “Tallahassee Love“, a song where T raps about the newfound fame and riches, but still says he has love for the hometown. “Church” follows and T-Pain raps to a up tempo beat, the track is not hot at all, sounds terrible..SKIP! Next track is titled “Tipsy“, T raps to a girl on this one about getting her drunk and taking her home. Call me crazy, but I think that he thrives on tracks like this one. The ladies will love this one. “Show You How” is the next track and T-Pain is rapping again, and once again he wonders away from his strength and raps, and fumbles the ball. The beat is garbage, and his rhymes are not up to par. “I Got It” is a skit where a girl tells T that she has HIV after he has screwed, WOW! The next track is “Suicide“, a continuation of the skit about the girl with HIV. The song is terrible, so all I have to say is SKIP! The next song is his second single “Bartender“, it has that club feel that T-Pain can deliver on. “Backseat Action” is about what else, getting it on in the backseat! The beat sounds alright, it’s just that T-Pain’s voice gets kind of irritating after awhile. “Put It Down” is the next track, and it is terrible. He sounds like Pretty Ricky on this, and that is not a good thing. SKIP! The next song is “Time Machine“, and he raps about how it used to be. While I enjoy his sentiments, the song is garbage. “Yo Stomach“, a song about his favorite part of a woman. The spot he says he like to bust a nut on! I’m sure this will win a lot of women over. Next up is the infectious single, “Buy U A Drank“. I like this song, this track is what made me want to review this album. Like I said before, when he sticks to this format, he makes good songs. “69” is next up, I wonder what this one is about? You guessed it. Boy I tell you, these R&B cats get away with murder. A change of speed on the next one titled “Reggae Night“, T-Pain tries an island flow, and it doesn’t sound too good. Kardinall Offishall is featured on this one, and he delivers on the track. “Shottas” is a skit about a night at the Reggae club, kind of funny. “Right Hand” follows and T goes back to what works for him, that singing/rapping thing. The last song on the album is “Sounds Bad“, and the name says it all. The song sounds bad, definitely one that shouldn’t close an album out.

Bottom Line:
This album may top charts and move major units, it’s not that good of an album. He got hit with the jinx, but they will spin it as a victory because of the sales. Well this album proves the old saying in Florida right, the best thing to come out of Tallahassee is Interstate 10! This album is not hot at all. Aside from a few singles, the album doesn’t offer the consumer much. This is definitely one for the ladies, but I don’t think the ladies will be feeling this one that much. Your boy T-Pain delivered a dud! Maybe he should do an album featuring himself on the hooks and other dudes rapping. Now that album would be hot!