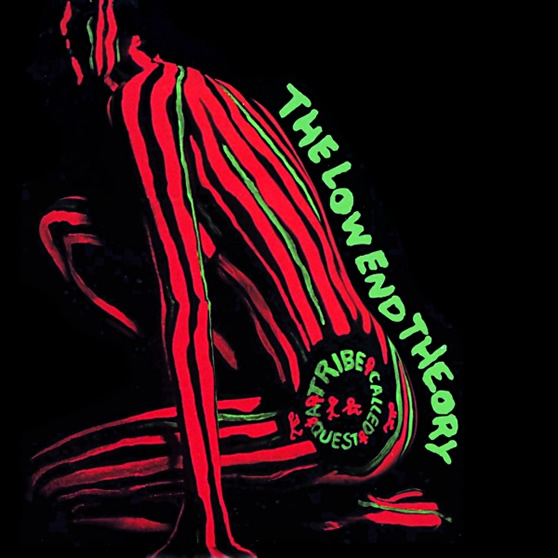 Since real Hip-Hop music and culture is currently being appreciated with special showings of Yo! MTV Raps episodes, clips, and videos, I thought that this would be the perfect time for me to introduce a new section to the nappyafro categories called Rewind Reviews. This section will be specifically for reviewing previously released albums covering various genres from Hip-Hop/Rap to R&B to Soul to Funk and more. So in kicking off the Rewind Reviews properly I thought I would start with a classic album from A Tribe Called Quest in their 1991 release The Low End Theory. So “Can I Kick It?”

1. Excursions
Featuring The Last Poets; Produced by A Tribe Called Quest
The bassline that starts off the song immediately sets the tone for the rest of the album with that Jazz-sounding Hip-Hop that has come to define A Tribe Called Quest and most of their earlier works. Q-Tip drops some ill rhymes while backed by The Last Poets; kind of how Common used them in his song “The Corner”. This is a great way to kick off the album.

2. Buggin’ Out
Produced by A Tribe Called Quest
Such a fitting title to this song as the bouncy bassline and drums definitely make you start buggin’ out while listening to this song. Phife Dawg put what I’m mean so fittingly when he rhymes:

Yo, when you bug out, you usually have a reason for the action/Sometimes you don’t it’s just for mere satisfaction/Tip and Phife continue with the ill flavor remembered from this album with this song.

3. Rap Promoter
Produced by A Tribe Called Quest
This is the type of songs that are truly missing from today’s Hip-Hop music in those that actually speak about something in their rhymes. This is a great song with a great message from Q-Tip on the topic of the music industry’s exploitation of musicians and artists. To all the promoters and label owners/executives: STOP SCREWING YOUR ARTISTS AND START GIVING THEM THEIR DUES!!! RAPPING AIN’T FREE!!!

4. Butter
Produced by A Tribe Called Quest
Just as the title of this song suggests, this track is pure butter. From the beat to the rhymes delivered by Phife it doesn’t get much better than this. The beat break in this song is absolutely incredible. Tribe had a great ear for the samples that they used as they just make the songs complete. This ain’t margarine, so don’t say you can’t believe it’s not butter cause that’s exactly what it is.

5. Verses From The Abstract
Featuring Ron Carter & Vinia Mojica; Produced by A Tribe Called Quest
Another great song from Q-Tip backed by an excellent jazz-based Hip-Hop beat. This song featured Tip doing exactly what he does best is dropping some dope, intellectual rhymes. Q-Tip’s vocal tone and flow makes it that much easier to listen to rhyming. It’s great to hear Vinia Mojica singing on the hook pre-Talib Kweli & Hi-Tek times. Her soulful singing makes it even greater.

6. Show Business
Featuring Lord Jamar, Sadat X, & Diamond D; Produced by Skeff Anselm; Co-Produced by A Tribe Called Quest
This is another song in the same vein as “Rap Promoter” that came earlier in the album with the topic of the music industry’s exploitations of those within it that make it what it is. This song is even better than “Rap Promoter” because of the other artists that a featured on the track with Q-Tip and Phife like Lord Jamar, Sadat X, and Diamond D. Each rapper does their thing and don’t really outshine each other in delivering a great message in the song. The extra bouncy beat also gives life to this song. Props to “Wicki Wacky” by The Fatback Band for the sample used in this beat. Check that out if you don’t know about it…Extra Funky!!!

7. Vibes And Stuff
Produced by A Tribe Called Quest
This is one of my favorite songs on this album. I was hooked to this song when I heard the first 2 seconds from the ill Grant Green sample used at the start. From there Tip and Phife drop some really nice rhymes displaying their skill and ability as emcees. It’s crazy how a lot of what they were rapping back in ’91 can still be applied in 2008. SMH! Say Word Q-Tip:

The industry is luck, winning with the fake raps/Peace to the crews, who pump the real Hip-Hop/Not sellin’ out from hardrock to disc jock

8. The Infamous Date Rape
Produced by A Tribe Called Quest
OMG! The beat on this song is so crazy. This has got to be one of the illest vibes on the entire album, and not one you would expect from the title of the song. This is an example of another type of great song with an equally great message that is missing in much of today’s Hip-Hop/Rap music. Who really talks about the topic of date rape or rape in general in today’s music, expect for Lupe Fiasco on “Intruder Alert” (At least he’s keeping it real). Halfway through the album and it hasn’t disappointed yet. Much more than I can say for today’s albums, which are done for after the first couple tracks.

9. Check The Rhime
Produced by A Tribe Called Quest
What a better way to follow up a great song with another equally great song. This song, which was the first single on the album, is a great head-nodding vibe with fantastic rhymes from Q-Tip and Phife. I can’t tell why this song was picked as a single for the album. Plus, don’t forget this is what introduced us to Industry Rule #4080…“Record company people are shady” (Still).

10. Everything Is Fair
Produced by Skeff Anselm; Co-Produced by A Tribe Called Quest
This is yet another great song by the Tribe following the mood and tone of the album backed by a Funkadelic sampled beat. What more could you expect with a pairing of those two artists, straight funky.

11. Jazz (We’ve Got)
Produced by A Tribe Called Quest & Pete Rock
This is one of my other favorite tracks on this album. Who couldn’t absolutely dig the straight jazz-based beat hooked up for this song to perfectly fit the rhymes and title of the song. Tribe definitely had the jazz and skills needed to make this song a gem. It was interesting reading in a Pete Rock interview though that he actually had created this beat in his studio and Q-Tip picked up on it while visiting one day and re-created it identically for Tribe and never got credit for it. Peep the Pete Rock shout-out at the end of the track by Q-Tip. He actually says “Pete Rock for the beat”. (Weird)

12. Skypager
Produced by A Tribe Called Quest
This is an interesting track by the Tribe as they tell about Skypagers, which were very popular in the 90’s, and what the name Skypagers means (The “S” in Skypage really stands for sex). This song sounds it could have been used for a commercial or promotional ad for Skypagers. It definitely might have worked for me back then to pick up one.

13. What?
Produced by A Tribe Called Quest
This is a great concept type song from Q-Tip asking questions in his rhymes fueled by the word “What?”. This song can be viewed as the original to “The Questions” by Common and “Why?” by Jadakiss. Just as those song were great ones, this one is equally great and deserves some answers to Tip’s questions.

14. Scenario
Featuring Leaders Of The New School; Produced by A Tribe Called Quest
Ah yes! We have reached the last track and finale of the album with the posse cut song “Scenario” featuring the Leaders Of The New School. This song has become the fan favorite of the album. Fueled by a high energetic beat and a great group of emcees, this song properly introduced an equally highly energetic Busta Rhymes to the public. His verse in this song is probably the most memorable as he drops hectic rhymes like:

Watch, as I combine all the juice from the mind/Heel up, wheel up, bring it back, come rewind/Powerful impact, BOOM! from the cannon/…/RRRRRROAW RRRRRROAW like a dungeon dragon/Change your little drawers cause your pants are saggin’

Bottom Line:
This album is a certified classic and has earned that title deservingly as evident in listening to the album in its entirety. From “Show Business” to “Vibes And Stuff” to “The Infamous Date Rape” to “Jazz (We’ve Got)”, Tribe executes these songs in perfect form with the perfect formula of great beats + great rhymes which equals perfect results. As the sequel to People’s Instinctive Travels And The Paths Of Rhythm and the predecessor of Midnight Marauders, A Tribe Called Quest offers an excellent blueprint to how classic albums should be done. You could call them Hip-Hop’s Chicago Bulls of the 90’s in the three-peat of classic albums they were able to deliver back-to-back-to-back. If you don’t already have this album in your collection, do yourself a favor and get it IMMEDIATELY. This is what Hip-Hop needs to move back to. Tribe asked “Can I kick it?” and without a doubt I answer “Yes you can”.

nappyPicks: The entire album. (Listen to this whole album; don’t even reach for the skip button)