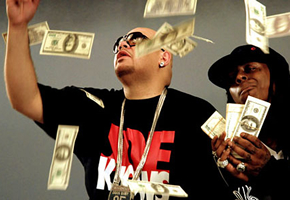 I was just telling somebody the other day how I thought Fat Joe got a raw deal with his last album The Elephant In The Sand. It actually was a good album (See how I gave it a 3 1/2 rating). Well, I don’t understand why he didn’t do this remix sooner seeing as that album has barley broke the 100,00 mark in sales after 4 months. They replace Plies from  original (The song didn’t fit him anyway) and add Lil’ Wayne & The Game instead. I must say that Weezy does his thing on the remix (“These boys bluffing/I’m doing the Hulk Hogan but they ain’t saying nothing”), The Game tries out his best Lil’ Wayne impersonation, and Fat Joe sends a little jab at Young Buck (“You heard Game, his enemy my enemy/Young Buck calling me, he wanna be a friend of me”). All in all it’s a hot remix and does what it’s supposed to.

*Update: I just realized that the version I put up was the clean version. Here’s the explicit version.