DMF of the Week: Jim Jones 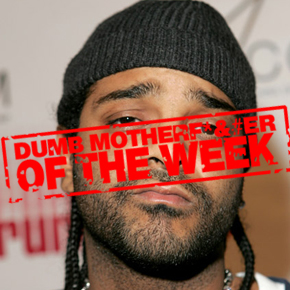 Jim Jones of “We Fly High” fame has been notorious for his beef with Jay-Z and also for being a mediocre rapper. But this time he knows he crossed the line with what he said. Last week, he dissed both T.I. AND Jay-Z for not including him on their radio hit “Swagga Like Us” with Kanye and Lil’ Wayne since: “You can’t have a song about swag unless I’m on it.” I don’t know if those are his exact words, but it was something like that. T.I. responded kind of mildly to Jones’ comments, not really talking about it. Then Jones took the cake with this one: he dissed Nas!!

“Fuck Nas. I don’t give a fuck about Nas. He’s a rapper that just lost his pizazz. When I was in high school, he was the sh*t. He was the n*gg* that got us hyped. ‘New York State of Mind’, Illmatic and all of that” said Jones.

“I was never cool with him. I seen Nas a few months ago in L.A. with Dame. We was staying in this hotel right above the Ferrari dealership. Dame seen him and was talking to him. I was laying back on a couch laughing. He didn’t know what to do. I was looking dead at him. [Laughs.] And then Dame was like, “You know Jim?” He started [stammering], “Ah? Ah?” Dame is just burnt out. He not thinking about none of that frivolous [beef] sh*t. Me neither, for the most part. Nas was never on my level ever. Ever.“

I am speechless. Never on Jones’ level?? Nas is probably the reason this nigga ever even touched the mic!! I don’t think I even need to talk about the number of classics under Nas’ belt, since Jones has none and only has released one album (We won’t count the first two). I just hope that Nas doesn’t go the way Jay did and release a song called: “We Fly High (QB Remix)”: even though Nas’ album Untitled STILL hasn’t gone Gold yet (Support people!!), I doubt that the legendary MC would respond to this. But on the other hand, Nas has made a lot of mistakes in his career; this would take the cake!

Congratulations Jim Jones, you are the DMF of the WEEK!