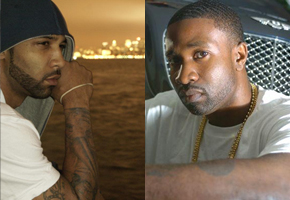 Everybody knows who Joe Budden is, but no one knows who Ransom is. The two have gotten into a serious beef over the Holiday weekend where someone got beat up (allegedly), someone got slapped (on camera), someone got accused of being gay, someone got accused of being a Fabolous dick rider, and someone’s girl got accused of cheating. Whew! Now that’s all out in the open, let’s take a look at some interesting videos from two rappers you may or may not have heard of. I actually enjoy Joey Jumpoff TV, so I might be a little biased. If you don’t have the time to check out all the videos, I’ll give you a quick synopsis: DJ Vlad asked Joe some questions about Ransom, Joe says, “Ransom is a Toyota and I’m a Lambo.” ETHER. Ransom fires back calling Joe broke and that Fab was hitting his girl. OUCH! Joe fires back with a response stating that Ransom got his ass beat, ran in the house got the toast and came out “playing Duck Hunt” and “shooting at Jesus!”WOW! Ransom then shows up at one of Joe’s homies houses gooned up and slaps somebody that didn’t have anything to do with it. DAMN! Seeing that there really is no end to this, Joe releases another video taking the higher road in the situation. It might be a little too late for all of that because a grown man got slapped ON his porch WHILE being filmed. All of this is entertaining, but I really hope that no one gets hurt behind all of this. Check out the videos for yourself and tell us what you think!