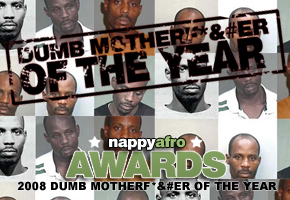 When I chosen to do this column, I questioned whether giving him this award would really help in the rehabilitation. However, this is nappyafro, and votes were cast and while it was close, DMX prevailed as the winner. Why you ask? The one time face of Def Jam was arrested more times than Pacman Jones! Nine times in a nine months has to be a record somewhere. His arrests range from speeding to identity theft. How X goes to a hospital and no one recognizes him is beyond me, but that might be an example of how far his status is fallen. Get this…X is still walking the streets. He said it in a song, “Only nigga walking the streets with four felonies!” Everyone has demons they deal with; I hope that DMX gets his life together. This has to be one of the biggest “Falls from Grace” in Hip-Hop history. X was in line to be the next 2Pac, then he went and messed it all up! How do you go from selling millions of records, selling out arenas, starring in movies to buying $30 worth of crack and weed on the streets? DMX, this is going to you as a person: put the game to the side right now and get Earl right. DMX will be okay once Earl is straight. I present this award to DMX, but I’m hoping that Earl Simmons will never make this award again.