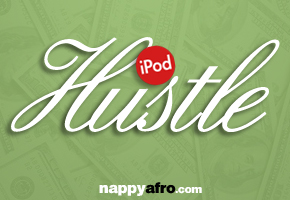 Ha! It’s back. It’s been exactly 51 days since my last iPod Hustle (Which is an official column now…thus the new banner. Bye Pam. I’ll miss you). If you’re not familiar with iPod Hustle, it’s where I talk about what’s currently getting plays on my ever-present iPod. This edition, I’m listening to new tracks by Mikkey Halsted, Jay Rock, & Killer Mike (Grind Time Rap Gang! Bang! Bang! Bang!). Shall we?

Download: Killer Mike – “Man Up”
I’ll admit; we slept on Killer Mike’s I Pledge Allegiance To The Grind Part II. At first. After a few more listens, Saule bumped up the rating and I even ranked “I Gotcha” as one of 2008’s best. Well, “Man Up” is exactly the shit I want to hear from Killer Kill From The ‘Ville. An ominous beat with Mike going hard at punk rappers. This is supposedly off an upcoming collaboration between Grand Hustle & Greg Street (Street is also on the track talking shit. I could have done without that).

Download: Mikkey Halsted – “Hello”
I heard a few tracks by Mikkey Halsted but obviously not hard enough. I didn’t put two and two together and realize, “Oh, that MIkkey who used to be down with Cash Money”. Yea, give me my late pass. Anyway, one of his newer tracks is “Hello” and it’s a banger. The first thing that drew me in was the production. Don Cannon! Yea, I always like 90% percent of his beats. Not to say Mikkey didn’t kill it either; he did. This is the first single his upcoming The Last Shall Be First EP.

Download: Jay Rock – “How To Rob 2009”
Jay Rock is another rapper I hadn’t given a fair chance. I always thought he sounded too much like The Game…or Glasses Malone. Maybe that how these new west coast rappers sound? Besides my bitching about the voice, the Watts’ Blood has talent. Here Jay Rock takes 50 Cent’s “How To Rob” and updates it. He robs everyone from OJ Da Juiceman to Drake (Now, if only The Madd Rapper would have jump on the hook). This is off Jay Rock’s new mixtape Gudda Muzik.