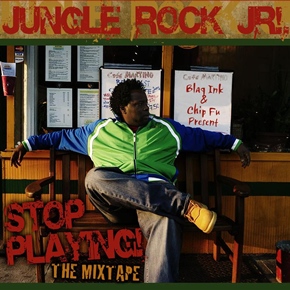 The older contingent of us that still loves the Hip-Hop culture and rap music remember the Golden Age. We talk about it like it was the best time for music ever…and well, it’s damn close if it isn’t the winner. There was something for everybody and plenty of room for it. Back then, a lot of rappers rapped fast, even ya’ boy Common was on that speedy delivery tip. Yeah, there were fast rappers, and then there was The Fu-Schnickens. “La Shmoove” took the Hip-Hop world by storm and had us all captivated with its fun lyrics, beat, and energy, hell, even Shaq got involved with the crew. That time is long gone and the members are forgotten a lot by the game. Enter Chip Fu (aka Jungle Rock Jr.). He dropped a mixtape over some reggae riddums and you need to DEFINITELY Turn Yo’ Headphones Up for this one.