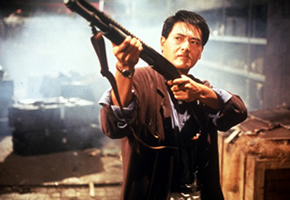 You know, I somewhat considered myself a movie buff. So when someone asked me a question the other day about whether I’d seen the The Killer, I was kinda embarrassed. It’s not that I don’t know about the John Woo & Chow Yun-Fat classic. Who didn’t remember Raekwon on Enter The 36 Chambers? “Where’s my Killer tape at?!” I’ve actually seen parts of the the movie but not it’s in entirety. Until now. Synopsis please:

Though John Woo’s lifelong admiration of Sam Peckinpah, Sergio Leone, Martin Scorsese, and Stanley Kubrick are also evident in this stylish actioner, the film is essentially a tribute to Jean-Pierre Melville and his cult thriller Le Samouraï. During a restaurant shoot-out, hitman Jeff (Chow Yun-Fat) accidentally hurts the eyes of a singer (Sally Yeh). Later, he meets the girl and discovers that if she does not have a very expensive operation very soon, she will go blind. To get the money for the surgery, Jeff decides to perform one last hit. The cop (Danny Lee), who has been chasing Jeff for a long time, is determined to catch him this time. The film’s number of victims makes The Terminator or Rambo pale in comparison, but its brilliant visual style and bravura direction earned accolades even from non-action fans.

But wait there’s more. It’s always hard to mention The Killer without mentioning Hard Boiled. Mainly because it has Woo & Yun Fat together again and raising the cinema body count. Some even put this Hard Boiled as one of the best action movie of all time. Why not make this a double feature? We haven’t done a Friday Night ‘Fro in a minute. One more synopsis:

Hard-Boiled is the last film directed by Hong Kong action auteur John Woo before his arrival in the U.S. This 1992 thriller, along with The Killer, is widely seen as one of his best from his Hong Kong days. Every ingredient of the quintessential Woo thriller is present, including his ever-present anti-hero (Chow Yun-Fat). Yun-Fat portrays a maverick, clarinet-playing cop nicknamed “Tequila” whose partner is killed in the dizzying chaos of a restaurant gunfight with a small army of gangsters. It is soon revealed that one of the mob’s high-ranking assassins is Tony (Tony Leung), an undercover cop who, despite his badge, is dangerously close to the edge. Tequila and Tony must team up in a tense partnership, and their common pursuit of a vicious crime lord results in a brilliantly elaborate climax in a hospital, where the heroes must rescue newborn babies from the maternity ward while fighting off dozens of mob soldiers. The characters Tequila and Tony are two sides of the same coin, another trademark theme of Woo’s films that would later be most fully realized with Nicolas Cage and John Travolta in the American hit Face/Off.