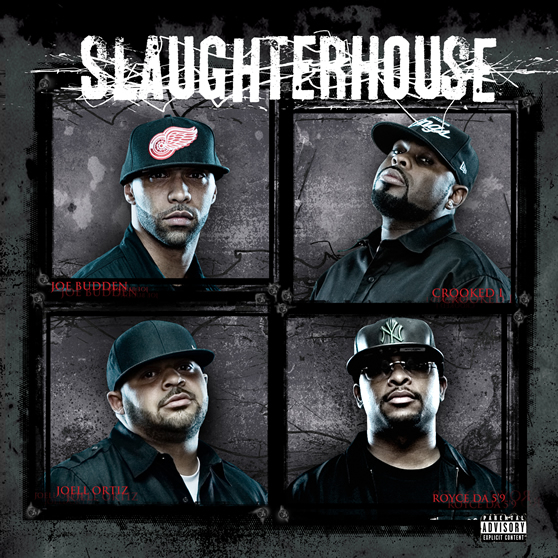 Me being the lyrical connoisseur that I am, I’ve had an interest in the group Slaughterhouse ever since their formation late last year. Even the harshest of Hip-Hop critics would have to admit that the lineup of Royce Da 5’9”, Crooked I, Joell Ortiz, & Joe Budden is a relay team of straight spitters. So now, after roughly 10 months of the group’s creation, Slaughterhouse is releasing its self-titled debut. For all it’s members involved, this arguably could be the biggest release of their careers. Will this album deliver and boost the profiles of Budden, Crooked, Royce, & Ortiz? Or could it be an album full of lyrical verses with no direction? Well, it’s “Slau-gust” 11th and the album has finally and “officially” been released. Let’s find out.

1. Sound Off
Produced by StreetRunner
The horns signify the beginning of the Slaughterhouse album and the team forms likes Voltron…literally. Royce Da 5’9” starts it off and makes this so: “We a outfit equivalent to Votron’s/That boy Crooked I equivalent to four arms/Joell Ortiz is the body/The cannibal slash killer/Kill you then eat your body/Joe Budden is the pair of legs/He runs shit along side I, the apparent head”. The beat starts off slow and speeds up with each member changing flows to coincide. At first I preferred them to ditch the rapid flow, but after a few listen it proves to be the right choice. Order: Royce/Joell/Crooked/Budden. They’re off to a good start.

2. Lyrical Murderers
Featuring K-Young; Produced by Focus
The song starts out with a sample of “Onslaught” (“I ain’t with the leaning and rocking…”). The beat is slow and the sinister sounding pianos fit the title and feel. Crooked I definitely keeps with the theme and basically kills it with the first few lines: “Lyrical murderer/Blame Rakim/I’m a sniper shoot my way into your lame top 10/Pistol to your head if I ain’t next to Eminem…” I probably could have done without the hook though. Other than that the song delivers on the promise of the title. Order: Crooked I/Royce/Joell/Joey.

3. Microphone
Produced by Alchemist
Alchemist lends his signature hard-edged sound here. It really doesn’t do anything special but does do exactly what it’s suppose to; gives room for Slaughterhouse to bury this track. Each member performs well. Royce delivers first: “When I bless a joint/It like Spock came up in the spot and grabbed the beat by the pressure point”. But Joe Budden may have the most inspired sounding verse: “Crime ain’t started yet/Still very bars a mess/Fuck record sales or who the machine markets best/I’m the last motherfucker that y’all should test/I’m the sharpshooter/You the nigga I target next”. Order: Royce/Crooked/Joell/Budden.

4. Not Tonight
Produced by StreetRunner
Hey, it’s a remix of “Now I Lay” off Padded Room. Naw, but even though the two beats have different producers, both sound very (very) similar. That’s not to say that there aren’t any quotable lines in the bunch. Besides lazy beat selection, the crew throws some out there: Crooked I – “Y’all say that your pockets are big/I rather say that I’m Pac mixed with B.I.G.” I will point out that the hook is suspect but this song is not anywhere near skip status. Average. Order: Royce/Crooked/Ortiz/Joey.

5. The One
Featuring The New Royales; Produced by DJ Khalil
I know they’re was some disapproved rumblings when this song was released. But hey, what do you expect? It’s the first single. The production (Especially the hook) is made to be more acceptable to the public but the rhymes don’t necessarily show this Particularly when there lines about girls with ball breath (I loved the Speakerboxxx/Love Below line by Budden though). Even though this is not one my favorite song on the album, I’m not mad at this. Order: Royce/Crooked/Budden & Ortiz go back and forth.

6. In The Mind Of Madness (Skit)
This skit shows what’s inside the head of Joe Budden. “Pause”

7. Cuckoo
Produced by DJ Khalil
This was one of the first songs to the leak of the album. And this shit had me hype! As the title suggest, each Slaughterhouse member gets crazy on this track. Since all are given two verses, they have room to drop lyrics like: “My triggers is stupid/You thugs is funny/My bullets be going It for the love of money/Dumb!” (Royce Da 5’9”) or “I dig eyes ass out/Watch me though/This is Bull shit/All the coke don’t fit I need a Scottie nose” (Joell Ortiz). Sick rhymes like this will even make Eminem proud. Khali kills on the beat and provides something that lets the group go insane. Order; Royce/Joell/Crooked/Budden (Does Joe Budden have always to go last?).

9. Onslaught 2
Featuring Fatman Scoop; Produced by Emile
The sequel to the first song Slaughterhouse released as a group lives up to the billing. I think one problem with some lyrical acts is the production not meeting up to the standards. This is not the problem here. The beat puts this one in banger category. Everyone drops heavy bars but one that stands out to me is Long Beach’s own Crooked I: “Listen/Don’t make a nigga find ya dame and make the dime give me brains till my mind is drained/Listen/Don’t make me grab a nine and aim and how your dime did me do your mind the same/But different” Shit! Oh wait, but there’s more: Budden – “They say he talk tough with his fake ass/Four pounds put me in another weight class”. Okay, I’ll stop cause by now you’ve figured out this is one to check out for right? Order: Royce/Crooked/Joell/Budden.

11. Salute
Featuring Pharoahe Monch; Produced by Mr. Porter
Slaughterhouse calls in Pharoahe Monch in to sing the hook Even though I would have preferred Monch to trade bars with the group, I understand that it’s jut so many verses to go around. The production slows things down as each member explains why they deserve respect. It well made but it can come off as boring. What’s up with the 50 Cent sample in the beginning? Order: Royce/Budden/Joell/Crooked (Does Royce have to always go first?).

12. Pray (It’s A Shame)
Produced by ReaLsoN
For some reason to me this sounds like something that would be on a DMX album. I do see that the group is trying to show they can make songs about different subjects. This song deals with life’s ill and them dealing with it. Props should be given because they do talk about serious situation, but the beat really brings this one down. It’s shouldn’t be skipped though. Order: Ortiz/Royce/Crooked (Budden just does the hook).

13. Cut You Loose
Produced by Mr. Porter
Here the Slaughterhouse rhymes about the current state of “H.E.R” (Hip-Hop). It’s fitting since this is a lyrically talented group in an industry that’s not necessarily looking for intricate lyrics. This is also the song that Budden calls out Method Man by name (Which was reportedly done before the beef was squashed): “You disgust me/I twelve step my addict itch/So Method Man you can have that bitch”. It’s a song that once again shows that they can rhyme about something other than verbally taking someone’s head off. They’ve done it better on previously released songs like “Move On (remix)” but this is okay too. I still don’t know how I feel about that beat though. Order: Royce/Crooked/Joell/Budden.

14. Rain Drops
Featuring Novel; Produced by Filthy Rockwel
I guess they chose to slow the pace on this half of the album. Actually, the song is quite sensitive and members really try to give the listeners even more insight in their past and present struggles: Joell Ortiz – “I’m still waiting on my dad to get back/He went to store in ’84 and I ain’t seen he after that/Nother single mom/Public assistance/The rent wasn’t consistence/So they had back and forth to court in the month of a blizzard.” Album cuts like this are necessary in giving your fan more than just the singles. Order: Royce/Crooked/Budden/Ortiz.

15. Killaz
Featuring Melanie Rutherford & C. Brown; Produced by Emile
At first I was scratching my head on why they would end the album with this song. But after more plays, the beat and hook grew on me. The ominous sounding track has Slaughterhouse back in verbal form once again bodying the track: Crooked I – “For instrumentals I dig a grave/Then drop so many bars around you/When you listen feel like you in a cage/Niggas styles is sour/You making lemonade?/Take a thousand hours to write/Our rhymes minute made/Me, Joey, and Joell leave you crippled/Motherfuck five cent/But we’ll kill you over Nickel/We some killers”. Yea, that about sums it up.

Bottom Line:
Even though I don’t think this album will be breaking sales record on it’s release date, it’s still a win in my book. I think Slaughterhouse is doing what it’s meant to: Make first-rate lyrical music and raise the stock of it’s members (I personally wasn’t a much of listener of Crooked I or Joell before the formation of the group. I am now.). The debut album will give the dedicated fans what they want and hopefully fellow rappers will take notice and step up their pen game. Not to say that the album doesn’t have it drawbacks. It does sorta drag towards the end and some of the hooks could use replacing (And on a side note, doesn’t the album cover look like a New Era ad?). On the flip side, props must be given to Slaughterhouse for not cheating their supporters. They released around nine songs before the album and none don’t appear here giving you more new music for you buck. Besides all that, all members hold their own and no one seems like a Yayo or Freeky Zeekey… which is really unheard of these days. Hip-Hop needs for groups and albums like this to do well.