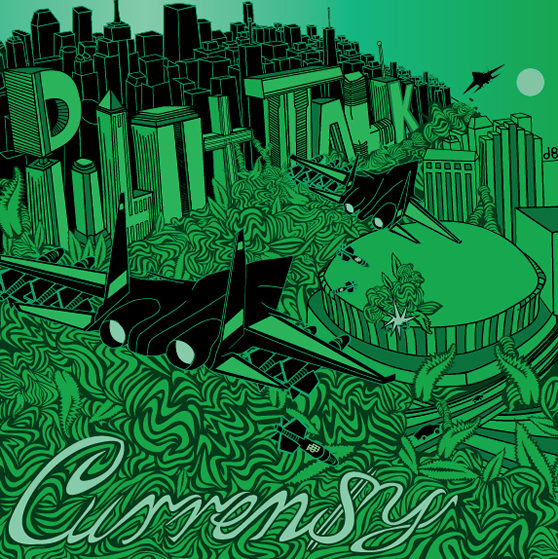 It seems like the third’s times a charm for Curren$y. After going from No Limit to Young Money to Fly Society to Amalgam Digital, Spitta is all set up to release his first album on a major label. The New Orleons rapper’s fly talk of women and weed has gained him a strong following but now he’s got a team behind him. With Dame Dash on the business side (DD172/Def Jam), Creative Control handling the visuals, and a reawaked Ski Beatz on the production, it looks like Cyrren$y’s career is ready to fly to new heights. Lets’ check out Pilot Talk.

Note: On this review we’re trying a new method called Group Therapy. We’ve called in nappyafro regulars P from da D & Chew in so we can get a broader look at this album. If you would like to see full review of Pilot Talk for the participants just mentioned, you can go here & here.

1. Example
Produced by Ski Beatz
P from da D:Cool intro. Really smooth track but it’s not gonna jump out at you. Its cool.
Chew: You notice the live instrumentation.
B-Easy: For first time listeners of Curren$y, this is a good setup. All of his metaphoric rhymes are here.

2. Audio Dope II
Produced by Ski Beatz
P from da D: Curren$y is not impressing lyrically though a beat like this could have been murked by someone more aggressive lyrically.
Chew: “Spitta get this whole shit jumping like, kangaroo pouch, louis vutton, the small thangs make me different from these fools.” It just grows into more calypso-boom bap bliss.
B-Easy: This is one of favorite tracks by Spitta. “Kick the shit out of beats till it die/Call CSI”. Who knew Jamaican steel drums could go this hard?

3. King Kong
Produced by Ski Beatz
P from da D: Is it just me or is it a lot of rap songs titled “King Kong”? Anyway, for a track called “King Kong” I would expect the beat to be harder.
Chew: Incredible when it’s dark and rainy, great any other time.
B-Easy: This was the first single off the album. The thought of the song is cool as is the imagery used by Curren$y. I’m still not crazy about it but that hook is effective.

4. Seat Change
Featuring Snoop Dogg; Produced by Ski Beatz
P from da D: For some reason I really like this one. And what the fuck happened to Snoop? His verse was GARBAGE! I’ll look past it though.
Chew: The live instrumentation helps this song out a lot.
B-Easy: Weed smokers unite! I can see this getting played live and loving it. But here it can come off a bit boring.

5. Breakfast
Featuring Mos Def; Produced by Mos Def & Ski Beatz
P from da D: The first track I ever listened to from Curren$y. And I like this one. Really smooth with a great beat but its too short.
Chew: I’ve memorized the whole song already, including the ad-libs.
B-Easy: This track has been out for a minute but it wasn’t until the video that I actually started to like it. Looks like Ski Beatz remixed it a bit for the original too.“Crane kick. Whaa!”

6. Roasted
Featuring Trademark Da Skydiver & Young Roddy; Produced by Monsta Beatz
P from da D: I dont know who these dudes is but you don’t really notice them. This to me kinda just blends in with the rest of the album.
Chew: “Olympic swimming in bitches Michael Leon, Phelps.” Everyone is consistent here.
B-Easy: I always like beats with a good piano loop. This sounds kinda old school too. It’s still an average posse cut.

7. Skybourne
Featuring Big K.R.I.T. & Smoke DZA; Produced by Ski Beatz
P from da D: This one is elvated a little though from the rest because of a nice hook and a verse from Big KRIT.
Chew: Soothing piano airplane feel
B-Easy: I saw this performed live and the vocals on this version sound MUCH better.

8. The Hangover
Featuring Mikey Rocks; Produced by Ski Beatz
P from da D: Im pretty sure if I was high this would be amazing. We got Mikey Rocks from The Cool Kids and his verse fits with the song well.
Chew: The chorus is intoxicating, especially when you’re walking early in the morning listening to this.
B-Easy: To me this has a “sitting around chillin’ and having drinks with my friends” kinda vibe.

9. The Day
Featuring Jay Electronica & Mos Def; Produced by Ski Beatz
P from da D: Now this is what im talkin bout. Mos Def Curren$y and Jay Electronica thats one hell of a good combonation. Best track so far.
Chew: Ski switched up on the production here.
B-Easy: “You was cool 10 years ago you fuckin Lex bubble!” I don’t know what that mean but I’ve been saying it all week. This hands dow the best track off the album.

10. Prioritize (Beeper Bill)
Featuring & Produced by Nesby Phips
P from da D: I like tracks with a topic/purpose. Okay track. I dont really think it was album material though and once again it was slow and short.
Chew: “That’s a mean pair of kicks, kudos love.” Not sure why this is my favorite line.
B-Easy: This is another one where the whole thought of it is cool but I can’t see myself listening to this one over and over again.

11. Chilled Coughphee
Featuring Devin the Dude; Produced by Ski Beatz
P from da D: WOW. I love this one! Crazy beat! This is more of the kind of shit I was expecting.
Chew: This song over time has grown to be more humorous than originally thought.
B-Easy: I’ve said this before but i think it’s a federal law that Devin has to be on you album if you have a “weed” song.

12. Address
Featuring Stalley; Produced by Ski Beatz
P from da D: If Curren$y was a better rapper he could really carry these tracks into great songs. Stalley fit perfectly over the track.
Chew: Howling vocal samples repeated throughout. Reflective.
B-Easy: This is another one where Creative Control’s touch made me like the song more. “Ain’t nothing change but the address…”

13. Life Under The Scope
Produced by Ski Beatz & Michael Sterling Eaton
P from da D: Its a really nice track but it just doesnt stand out or demand attention.
Chew: The rumbling bass hides under the pianos.
B-Easy: “Evict yourself/From the house/Like when Beth instigated that situation with Tammie/Got David kick out”. That’s pretty cool line for the people who caught it.

Bottom Line:
P from da D: I came to the conlusion that this a strictly a smoker’s CD. I just dont understand why on his biggest album yet why it would just sound like another mixtape. This is why you dont make a whole album with the same producer; it just sounds like one long ass song. And only 13 tracks (Not counting bonus)? Not only that but some where short. But on the other hand it wasnt bad, dont get me wrong I dont hate the album and thats why im having a hard time picking a rating. He doesnt deserve any lower than three stars because nothing on here was terrible just a little boring. [3 out of 5]

Chew: Sometimes, it’s not about what the artist really has to convey to us, it’s how he conveys the ideas and philosophies that he already knows to the best of his knowledge.

I’ve played this straight through everyday ever since the album came out, and this album does not fail to impress, growing on me more and more as the days went by. Sure, I initially thought the hype was too much for Curren$y to truly deliver, but apparently to him, none of that really matters. Let him do this thing, and we’ll appreciate it, regardless of what he does. Simply, quite a fantastic album. [4 out of 5]

B-Easy: If you were looking for Curren$y to change up his style for this major treatment, you were thoroughly mistaken. And that’s not a bad thing. He stuck to his guns and what we get is an album that isn’t like most released by major labels. It’s full of smart metaphors, plane fixations, and things that created fans for Curren$y.

The draw back here is that the album will be hit or miss with most fan; they’ll either think it’s boring or love it. Thanks to Ski Beatz handling most of the producing duties it has cohesiveness but what you get early on in the album is what your gonna get in the end.

Smokers, underground heads, & backpackers will love Pilot Talk. For new listeners it may take a minute. [3.5 out of 5]