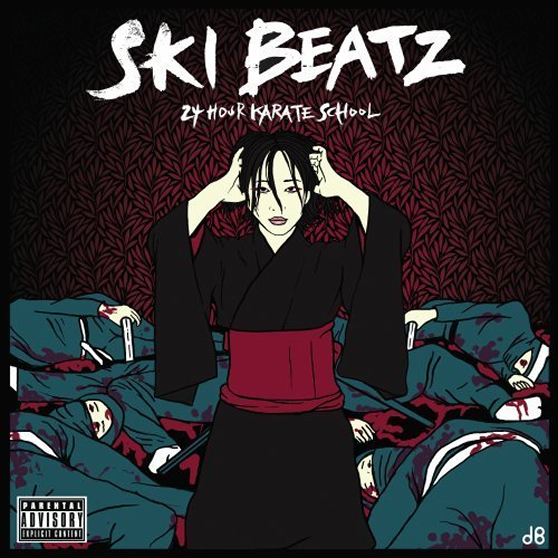 Ski Beatz has been putting in work since the 1980’s. Always a talented producer, Ski is probably most known for his contributions to Jay-Z’s Reasonable Doubt as well as his productions with the group Camp Lo. But recently the producer has had a kind of rebirth working with artists like Curren$y, Mos Def, & Jay Electronica and reconnecting with Dame Dash under Dash’s DD172 collective.

But the road for the release of Ski Beatz’s 24 Hour Karate School has been long one. Originally scheduled for a March 30, 2010, the album has had many delays as well as a change in the way it is to be delivered to the masses (It was also originally supposed to be a mixtape). But during the period of waiting for the project, Creative Control directed music videos, the leaks, and snippets of music from 24 Hour Karate School raised the anticipation for fans even more. When we finally did get a concrete release day and tracklist, Mos Def (Someone who was featured on prominent 24 Hour Karate School tracks) was no where to be found due to clearance issues. Also it was also said that sample issues also cause many of the delays of the album. How did this effect the music and will it still pack a king size karate chop the way fans hoped? Let’s find out…

1. Nothing But Us
Featuring Curren$y & Smoke DZA; Produced by Ski Beatz
For the first song of the album, Ski did something very smart by redoing the beat with live instruments. I don’t know if it was because of sample issues or because the song has been out for a minute now, but it was a good decision. The song, which was already good with the original production, now has this huge feel to it. The big horns moves this to “theme music” territory. Good choice for the first single too as both the flows and verses from Spitta & DZA match the tone of the music (The music video does this too).

2. Go
Featuring Jim Jones & Curren$y; Produced by Ski Beatz
Jim Jones starts off this track and honestly, I’m ready to hit skip immediately. Jones wasn’t terrible here on the hook, but it seems like his opening verse does a slight disservice to the rock-inspired beat (Ironically I thought he also did this on BlakRoc). Curren$y does a better job on the second verse but the track is average.

It’s worth noting that this is one of the three songs that originally featured Mos Def. He rapped last and his verse did seem to make the song more complete. They also took out the Last Dragon samples at the beginning (Which I expected). Still a good track.

4. Do It Big!!
Featuring The Cool Kids & Stalley; Produced by Ski Beatz
The stripped down beat sounds as if Chuck Inglish might have co-produced this one as this is similar to other Cool Kids songs. While I like Stalley’s opening verse, the song seems bland (Especially that hook: “Just put the butter on the popcorn..”).

5. S.T.A.L.L.E.Y.
Featuring Stalley; Produced by Ski Beatz
This track gives me mixed feelings. Of all the songs that I heard before the release of 24 Hour Karate School, this was by far my favorite. But it seems Ski slightly changed the beat from the original version (Mostly the bass). I don’t know if it’s because of sample clearance but the small alteration changes the appeal of the song (It still sorta has that new school Public Enemy feel). Stalley still shows his talent (“Jesse Owens when the beats going”) but the original version showcased it better. Check out the dope “S.T.A.L.L.E.Y.” music video for proof.

6. Not Like Me
Featuring Tabi Bonney; Produced by Ski Beatz
Mr. “Put Me In The Pocket” scores a solo joint on 24 Hour Karate School. Over live drums and bass, Tabi Bonney fly talks his way to an okay song. It doesn’t go above okay because of the simplistic rhymes but the production matches Tabi’s flow. Although, if you don’t like Tabi’s voice it’s a good chance you won’t like this song.

7. Scaling The Building
Featuring Wiz Khalifa & Curren$y; Produced by Ski Beatz
This is another song that has been floating around on the internet for a second. I think a lotta people assumed this would be on Curren$y’s Pilot Talkbecause the mellow sound could easily fit there with no problem. After hearing “Nothing But Us” on the album’s opener, I wondering how this song would sound remade with live instrumentation (Curren$y even raps some of the same lyrics on both songs). Even though most fans have probably heard this already, it’s still worth checking out again.

8. Super Bad
Featuring Rugz D Bewler; Produced by Ski Beatz
First off, how good is Rugz D Bewler’s name? Right? On first listen I didn’t like this song, but after checking out the music video for “Super Bad”, I found myself singing the hook later (“I’m super duper bad, pen, pad. I’m super duper bad..”) so I guess this one grew on me. The skipping style of the beat as well as the weird and fun wordplay from Rugz also makes the song unique.

9. I Got Mines
Featuring Tabi Bonney, Nikki Wray, Ras Kass, & Stalley; Produced by Ski Beatz
This song sounds like a downgrade from the previous posse track on the album “Prowler 2”. It also sounds like a throwaway tracks from the BlakRoc project. Good to see Ras Kass but while everybody here can’t be called on for doing a bad job, the cohesiveness isn’t really there. And is it me or does Nikki Wray appear on anything having to do with Dame Dash?

10. Back Uptown
Featuring Camp Lo; Produced by Ski Beatz
Ski brings in his Cooley High homies on this one. At first it may remind you of Track 8 (“Super Bad”) but it’s actually a little better. Camp Lo have been rhyming over Ski tracks for a while and it shows. It seems like Sonny Cheeba & Geechi Suede toned down the abstract rhyming style here (Which is not a terrible thing).

11./12. Cream Of The Planet & Taxi (Instrumentals)
Produced by Ski Beatz
I lumped the last two track together because both originally featured Mos Def. They still are nice instrumentals but of course you would rather have Black Dante verses here instead.

Bottom Line:
Hype is a double edged sword and it seems like 24 Hour Karate School didn’t match the buzz surrounding it. I’m happy to see the reemergence of Ski Beatz on the scene, but I’m also sad that this compilation was a little disappointing. The missing Mos Def tracks did hurt the overall project but most of the other songs here also didn’t help matters as some seemed to be fillers instead of main attractions. This may be put more on the actual rappers as the production by Ski Beatz seem largely on point. This album does pack some hard kicks here and there but the light punches show it probably needed more time in the dojo