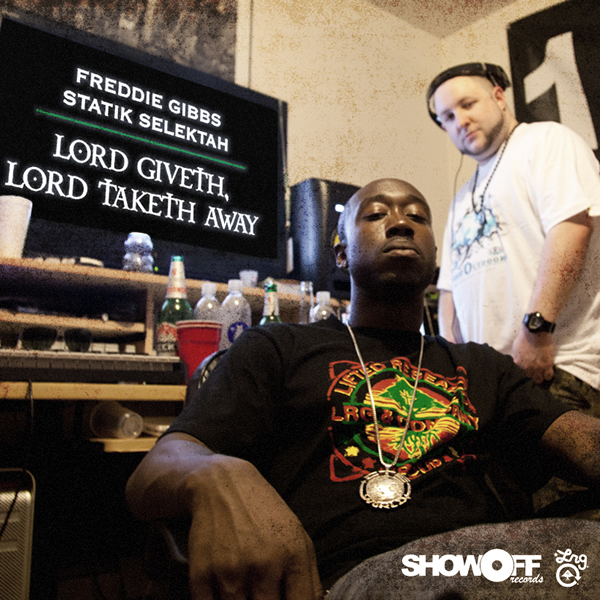 This is a project Freddie Gibbs recorded with Statik Selektah in 24 hours. Freddie Gibbs is probably my favorite rapper at the moment. Ive been waiting for some more heat from him and am excited to hear this. It was released as an EP which to me means, scared to call it an official album but doesn’t want to call it a mixtape so they can make money off of it.

2. Lord Giveth, Lord Taketh Away
Produced by Statik Selektah
Crazy smooth beat from Statik. Gibbs goes in on this one like usual. The hook is fire and fits perfectly with the track. Great start off to the album.

3. Rap Money
Featuring Daz Dillinger; Produced by Statik Selektah
Gibbs and Statik does it again. I really hopes that Gibbs changes up his subject matter somewhere along in the album though. He’s been doing the Midwest Gangsta drug dealer rhymes so far and I like him better when he shows more versatility. Daz does his thing also. I think its real cool for Gibbs to reach out to Daz too.

4. Affiliated
Featuring Reks & PUSH! Montana; Produced by Statik Selektah
I know this album was recorded in 24 hours but the problem now is that it sounds like it. These tracks sound similar also. It actually sounds like it should have been Reks track too.

5. Wild Style
Featuring Termanology & Fred The Godson; Produced by Statik Selektah
I’m already not to excited to hear this song when I see it features Termanology and Fred The Godson but I’ll give it a fair shot. This album has too much of an older New York sound for Freddie Gibbs. I don’t think it’s a good look for him. Gibbs does give his best verse of the album though he kills this track.

6. Already
Featuring Trae The Truth; Produced by Statik Selektah
Why so many features? Anyway Trae The Truth verse is cool but this makes me want a Gibbs and Z-Ro feature (I think that would be fire). Gibbs whole verse is quotable in this one. He is an amazing rapper if you don’t know by now.

7. Keep It Warm For Ya
Featuring Smoke DZA & Chace Infinite; Produced by Statik Selektah
I don’t like or understand the way this album. This is a track about using other people’s pussy. My boy DZA takes the cake on this one; he was perfect for this. They couldn’t have picked a worse way to end the album. I understand 0%

Bottom Line:
While this album is enjoyable the problem is that is sounds like not a lot of effort was put into it. It was supposed to be a quick project but it shows in the music. I don’t think Freddie Gibbs was allowed to get into his full creative zone in 24 hours or 48 hours or whatever they recorded this in . As a mixtape this would be fine but I think the problem is that they are calling this an EP. If this was your first taste of Gibbs you probably won’t be hungry for much more. Gibbs does his thing lyrically, don’t get me wrong, but the album is just shallow and bland. I don’t think this was a good look on the behalf of Gibbs camp. But give it a try though this is something some people will enjoy and some people will just be so-so like me but nobody will hate it though. I hope Gibbs next project shows his other side such as tracks like (“World So Cold”, “National Anthem”, “Close Your Eyes”) and things of that matter.

Sidenote: For the people that never heard Gibbs before that are gonna look at just the number of stars I given and not look at the explanation, I beg you please don’t. Go listen to some of his other material. He is definitely one of the best right now.