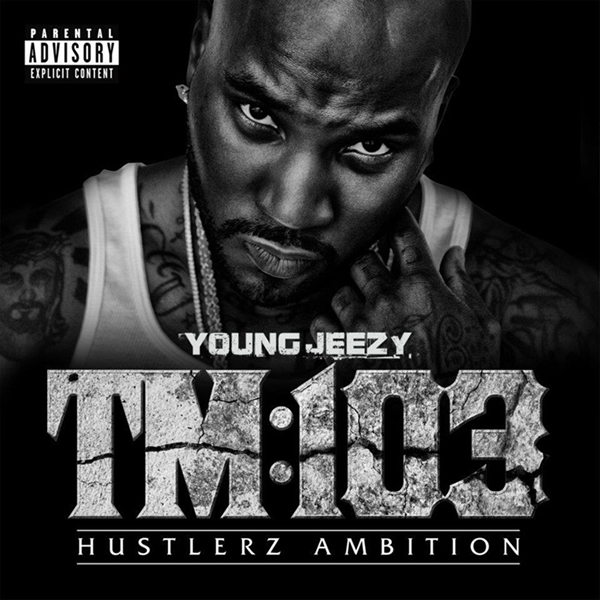 It’s been a weird couple of years for Young Jeezy. Where as in the past he could be considered America’s favorite trap rapper, that title could arguably now be awarded to either Rick Ross & Gucci Mane (Coincidentally two rappers Jeezy has beefed with in the past). Adding to that was the fact that Thug Motivation 103: Hustlerz Ambition, Jeezy’s 4th album, has been delayed for basically two years with a plethora of missed release dates as well as a few failing singles that missed the mark (Examples: “All White Everything” & “Jizzle”). But finally, a release date for TM103 was set and Jeezy (And Def Jam) have been working pretty hard with the promotion of the album (Examples: Multiple music videos, mixtapes, documentary, etc.). Can Jeezy return back to his spot in the rap game as well as live up to the previous Thug Motivation entries? Let’s get it…

1. Waiting
Produced By Lil’ Lody
After multiple setbacks on the releasing of TM103, this seems like a suitable intro by the title alone. The beat by Lil’ Lody, who produces five tracks on the album, has a Lex Luger feel to it and starts slow before picking up mood during each of Jeezy’s verses. Jizzle takes this time to reassert his self and remind listeners just who he is:

Y’all know damn well I wouldn’t lettin you niggas down
Just to sit back and watch you led by these fuckin clowns
4 hours in, niggas still talking this real shit
3 classics in nigga, and that’s on some real shit
Bitch, I’m legendary, bitch I’m a living legend
Been through straight hell so I can get street heaven

Because of the hook, this isn’t a home run of an intro, but it’s not a bad start either seeing that Jeezy sound comfortable here.

2. What I Do (Just Like That)
Produced By Drumma Boy
Yea, this track sounds like Lex Luger produced it too but I’ll look past that for a few reasons. First off, the beat matched with the hook here, “What I Do (Just Like That)” has the possibility of tearing down the club. The second reason I like this track is because the hook has been stuck in my head for the past few days. This will do well in the streets.

3. OJ
Featuring Fabolous & Jadakiss; Produced By Lil’ Lody
I hate it when you have a great song on paper but the song fails to meet the expectations. That’s not the case here. Besides the ridiculously dark beat here, it helps that every rapper involved has made a career of rapping about the white bitch (No Lindsay Lohan. Well, then again..). Jeezy & Jada have great performances but Fab leaves with the best verse (“Married to this shit, asking am I getting cheddar now/They say I do, like a motherfucking wedding vow”). Standout track.

4. Nothing
Produced By Lil’ Lody
“Nothing” is basically a boring version of “What I Do (Just Like That)”. The music video for “Nothing” is kinda boring too. You do get to hear Jeezy’s Master P immersion so I guess that’s something. Or nothing.

5. Way Too Gone
Featuring Future; Produced By Mike Will
This may be the first song that I didn’t mind Future’s rapping. He still has that “Racks” flow but at least he didn’t use the Auto-Tune. Besides that, this production here sounds like something that would be on Jeezy’s earlier album (Not a bad thing at all). The subject here is partying hard and living life fast and it seems to be a suitable soundtrack for such activities.

6. SupaFreak
Featuring 2 Chainz; Produced By D. Rich
Just like the lasts track, Jeezy get a feature from an up-and-coming Atlanta rapper that’s tall and has dreads (Weird right?). The production is similar too but replace the subject matter from fast living to the need for freaky chick in the bed. You can try to write this one off as strip club music (Jeezy has in fact performed this at King Of Diamonds), but the 2 Chainz’s verse seems to be catching on as I’ve seen LeBron James rap his verse and heard about King Jerm’s nephews quoting it (To be fair, this may be more due to 2 Chainz rising popularity). 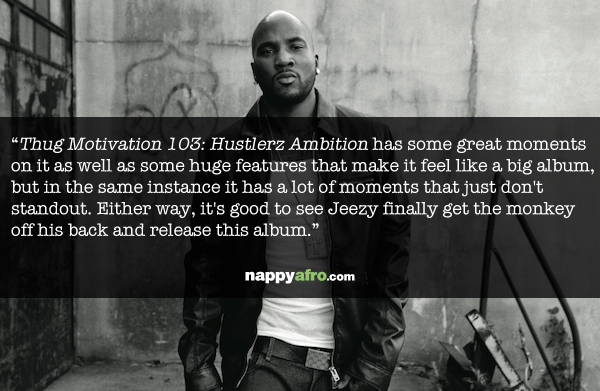 7. All We Do
Produced By Midnight Black
The female that talks on the beginning on “All We Do” sounds like the most hoodrat chick ever. But then again, that’s the basis of the song; a broad that ever time you hang out with all you do is fuck and smoke weed (“All we do is smoke and fuck, smoke and fuck” is repeated on the hook four times). I guess most thug rappers end op putting a song like this on their albums but Jeezy gets points for not making it mushy at all. Backed by the fact that the beat here is also pretty good, this may be a new hoodrat anthem. :

8. Leave You Alone
Featuring Ne-Yo; Produced By Warren G
So after getting his “SuperFreak” and his hood sidepiece, I guess Jeezy has to get his main squeeze back. If the Ne-Yo feature didn’t tip you off, this is one for the ladies. And also one for the radio. This isn’t bad track but it doesn’t fit with the track we’ve heard so far. Plus seeing that Jeezy has had pretty good chemistry with singers in the past (See “Soul Survivor” & “Trap Star”), I was expected a better callabo. Props to Warren G for the quiet return; second album we’ve reviewed this year with a beat from him on it.

9. Everythang
Produced By Lil’ Lody
I’ve always thought Young Jeezy’s back story & struggles were pretty compelling and this song once again recounts that story. But between the weak production and the lazy hook, I not as interested in this song. Not terrible but forgettable.

10. Trapped
Featuring Jill Scott; Produced By J.U.S.T.I.C.E. League
While not really in sound, “Trapped” reminds me of “Maybach Music III”. Both are produced by J.U.S.T.I.C.E. League and both pair a Neo Soul artist with a gangster/drug rapper (By the way, I love hearing Jill Scott talk shit). And just like “Maybach Music III”, this song is soulful and the combination of artists work.

11. F.A.M.E.
Featuring T.I.; Produced By J.U.S.T.I.C.E. League
While TM103 has had other singles, this one seemed like the one that signify that the album was actually being released. One thing that I like about this track is that it’s crazy remembering how raw these rappers came into the rap game and now seeing them on the other side talking about the curse of fame. That’s not a knock at the song or the contents because the songs actually comes out pretty good.

12. I Do
Featuring Jay-Z & Andre 3000; Produced By M16
Before this song was even finished, we heard about it and even got a leak of just Andre 3000’s verse. But after all that, it’s still cool hearing Jeezy with Andre 3000 & Jay-Z on the same track. Is it me or is everybody talking about the drug game instead of 3 Stacks? This is a big record that I’m hearing might be Jeezy’s next single but I seriously doubt a music video will happen though. On the production side, M16 flips Lenny Williams’ “Let’s Talk It Over” to good results.

13. Higher Learning
Featuring Snoop Dogg, Devin The Dude, & Mitchelle’l; Produced By Lil’ C
Let’s be real here, anything you see Snoop Dogg or Devin The Dude on a track you most of the time know what the song is about. Plus the song is called “Higher Learning”. As far as weed songs go, it fits the mold with a slow beat and a hook about getting high. It’s about what you expect. I’m surprised that this kind of a song is these deep on the album though.

14. This One’s For You
Featuring Trick Daddy; Produced By Lil’ Lody
Jizzle reaches out to Trick Daddy for the last track on Thug Motivation 103: Hustlerz Ambition. It’s only fitting seeing that at one time TDD held the monopoly on putting “thug” in all his album titles. Both rappers take time to address the fuck niggas aka haters. Besides a hook that I’m sure I will be singing tomorrow when somebody cuts me off in traffic and seeing Trick get some shine, “This One’s For You” is just a serviceable outro. Still, shout out to fuck niggas.

Bottom Line:
While I’m not quite sure if this album will bring back people wearing Snowman t-shirts, I am pretty positive this is a solid outing by Young Jeezy. This thing is, Jeezy is going through the same thing most successful gangster/drug rappers go through; the more successful you get the more away from your source material (the streets) you are.

Thug Motivation 103: Hustlerz Ambition has some great moments on it as well as some huge features that make it feel like a big album, but in the same instance it has a lotta moments that just don’t standout. Either way, it’s good to see Jeezy finally get the monkey off his back and release this album. Seeing as TM103 may have a good first week in sales, this may be in fact the resurgence of Young Jeezy.