Slaughterhouse – Welcome To: Our House [Review] 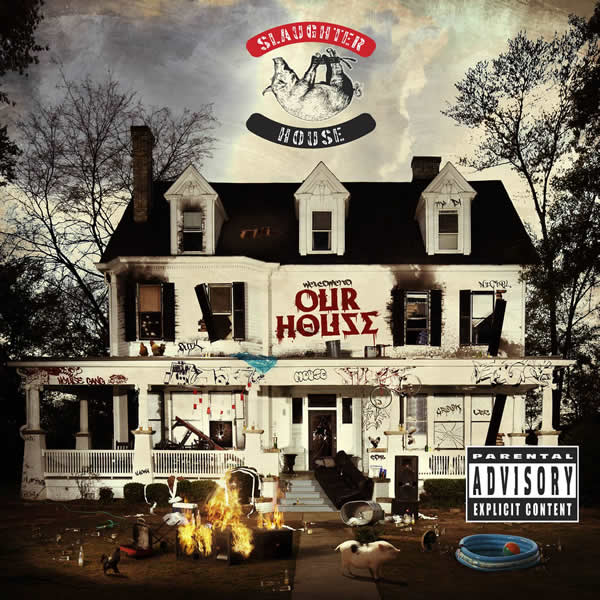 As a person that just honestly loves Hip-Hop, let me first say that it feels good that four extremely talented lyrical MC’s actual got a major record deal. When news broke that Eminem had signed Royce Da 5’9″, Crooked I, Joell Ortiz, & Joe Budden to Shady Records, it felt like a perfect match and with lyric heavy Hip-Hop getting presented on a major stage. Now it’s time to actually see what the group does with major label backing on their second album, Welcome To: Our House.

1. The Slaughter (Intro)
Produced by Eminem
On the intro skit, it sounds like the Slaughterhouse rappers take a chainsaw to a MC battle; maybe it metaphorical and they’re lyrics are the chainsaws (Also, it feels like Crooked I just showed up to record this because he’s the only one I can hear). Either way, it sounds very Eminem (Get use to hearing that term in this review).

2. Our House
Featuring Eminem & Skylar Grey; Produced by Alex Da Kid
Over dark menacing production, all the members of Slaughterhouse (Besides Budden who sits this one out) speak on how this rap shit is their house. Eminem also gives a verse and sounds a little hungry (And it may be the best on the song). Speaking of Em, with Skylar Grey singing on the hook & Alex Da Kid provided the beat, this seems like a song that could be on an album by him or Dr. Dre. That’s not necessarily a bad thing. Fitting start.

3. Coffin
Featuring Busta Rhymes; Produced by Hit-Boy & Eminem
I thought they used Busta Rhymes good on “Coffin”. He’s on hook duty but he hypes up the song (Besides, it’s only so many verse to go around). The song is a party record but not one that caters to the radio; think Biggie’s “Party & Bullshit”. All the MC’s gives short verses but do good because they talk about their favorite topic; putting rappers in coffins.

4. Throw That
Featuring Eminem; Produced by T-Minus & Eminem
When this initially song came out and we posted it , I really didn’t know what to think about. Andre 650 in the comment section said that it felt like a song Eminem would do with D12 back in the day. I get that, but now I think it feels like that goofy song Em would do as a single for his album like “Without Me” or “Just Lose It”. It understandable that every song doesn’t have to be rappty rap but I’m still lukewarm on this one.

5. Hammer Dance
Produced by AraabMuzik & Eminem
This was the first single off Welcome To: Our House and I really didn’t like it on the first few listens. But now that it’s grown on me, I actually think it was a good introduction for the group to the rest of the world. It does that thing where it can be played in the club but still has a street edge while and also giving the members room to flex rhyme talents. Plus, how many people caught the Korn sample?

6. Get Up
Produced by No I.D. & Eminem
One of the cool things about the group Slaughterhouse is the comeback story behind it’s creation. And that’s the basis of this song. Crooked I may have said it best:

This is how we attacking it, four rappers who passionate
Took the idea of a group and re-imagined it without planning it
Now the whole planet has to admit that’s the shit

If you had to score a Hip-Hop training montage with sampling the theme from Rocky, this would perfect (“How quick are you gonna get up?”). Props for also sampling a reading of an early Fantastic Four comic.

7. My Life
Featuring Cee-Lo Green; Produced StreetRunner, Raymond “Sarom” Diaz, & Eminem
This is the Slaughterhouse most blatant attempt at a radio hit. I know the group has defended the song saying how real it is with Ortiz talking about the death of his grandmother or Royce trying to improve the life of his father or Crooked I bigging up Left Eye, but to be real, “My Life” is in fact a song for the radio. Nobody can blame an artist going for broader audiences but if it feels like an attempt, the results can seem manufactured. With all that said, the song is catchy but can be a bit annoying (Even after I found out the album version had “motherfuckin'” in the hook).

8. We Did It (Skit)
Produced by Eminem
Short skit with the group (Mostly Joe Budden) talking about how they made it. 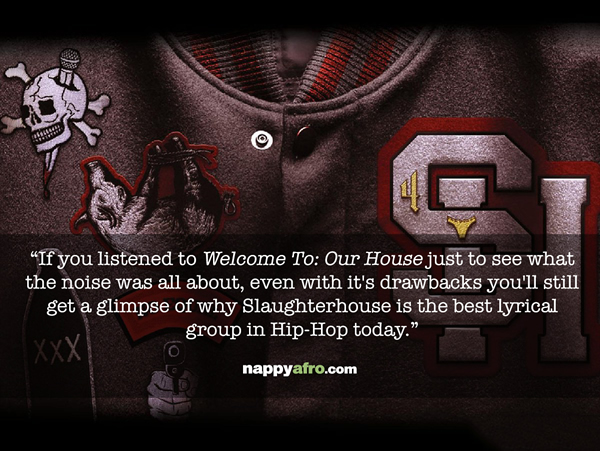 9. Flip A Bird
Produced by Black Key Beats, Zukhan, & Eminem
This is the most left track on the whole album and it turned out great. Imogen Heap’s “Little Bird” is sampled and the use of it is pretty clever (One of the samples actual says “little bird” but it sounds like “flip a bird”). The crew talks about how if rap fails them it’s back to putting work “in the kitchen”. The beat is kinda spacey in some parts but the song is great as an album track.

10. Throw It Away
Featuring Swizz Beatz; Produced by Mr. Porter & Eminem
This is another song that may have grew on me since my first listen. Not to the point where I loved but where I could bare it (I’m always partial to ESG’s “UFO”). It’s basically your usual stripper/make it rain song but it feels like Slaughterhouse wasn’t all the way comfortable here (For example, Swizzy sounds right at home). All this may be a reason why the song didn’t make a bigger splash.

11. Rescue Me
Featuring Skylar Grey; Produced by Alex Da Kid
We get another appearance of a Skylar Grey hook & a Alex Da Kid beat. That maybe why the track has a feel comparable to Dr. Dre’s “I Need A Doctor”. The subject matter deals with moments where the group members needed to rescued from certain situations. It’s a solid track but nothing really jumps out because it feels like we’ve heard a track like this already.

12. Frat House
Produced by T-Minus & Eminem
If you looked at the title “Frat House” and figured that it was gonna be lot of metaphors involving college, you are correct. And after you hear a few of them and you get what’s the theme, you get tired of it fast (ex. “Brain in the college in Philly, call that Temple”). The generic production doesn’t help either.

13. Goodbye
Produced by Boi-1da, Eminem, & Matthew Burnett
As with “My Life”, “Goodbye” is very accessible. But unlike “My Life”, “Goodbye” sounds like Slaughterhouse is more at home. It sounds like the members left it all on the page here: Budden talks about having a miscarriage with an ex-girlfriend, Joell talks about his grandmother passing, and Crooked talks about his Uncle’s death (Royce sat this one out). I’ve heard people calling this song sappy because of the hook but I honestly think the group sold it and made it felt genuine.

14. Park It Sideways
Produced by Kane Beatz, JMIKE, Ashanti “The Mad Violinist” Floyd, & Eminem
Whoa. It’s a damn shame that I almost made it to the end of this album without hitting the skip button. But the hook on this is fucking terrible. God damn Royce. It almost sounds like a parody. But sadly  it isn’t. SKIP!

15. Die
Produced by Mr. Porter
This is the ski mask song. It has to be with lyrics like “Someone’s gonna die, die, die, die” being sung on the hook (Royce called in “Shooter music”). It took me a second to get over the hook but the production here is really well done with Royce, Crooked, Budden spitting aggressively. Joe Budden had a crazy verse here:

Look, this a whole nother “Ether”
Hop out, black mask, low Caesar
Tell the goonies keep it low with the reefer
New bodies on old heaters
We ain’t rapped too tight
Starving, they thought Jeffrey Dahmer had appetite
I’m detail, not derail
Don’t lay your head if you shit by it
Got skeletons, but my shit private
I paved the way, y’all misguided
So try it, I’mma send a threat
Tie her up don’t end her yet
Bullet go through your wife’s eye now we know you ain’t on the internet

16. Our Way (Outro)
Produced by Boi-1da, The Maven Boys, & Eminem
For the ending, Slaughterhouse takes a victory lap and proclaim that they made on their own terms (“We turn one song to a group, to a concert, to a record deal”). Over a dark beat, the group members take turns rapping about what they overcame to get to where they are now. It feels right because the song appropriate to end on. Welcome To: Our House is over.

Bottom Line:
It’s kinda funny that Slaughterhouse stated numerous times on the album about how they made it their way. I say that because you can feel Eminem’s & Intercope’s fingerprint all over this album. Notice how Em’s name is on almost every track because as he co-produced or added additional production to each track? I’m still not sure if that was the best way to present this group to rest of the world especially if they don’t want to be known as better version of D12 (To those not familiar with them prior to the Shady signing).

As for the Interscope influence, you can hear those on songs like “My Life” & “Throw It Away”. There’s really no problem with that because I’m sure most of us didn’t expect the album to be full of 10 minutes tracks with no chorus and all lyrics. But the problem comes when it doesn’t sound natural and the fact that none of those singles really took off kinda shows that. It’s a part of me that feels Slaughterhouse could have sold 50,000 in the first week just being them.

On the flip side let me point out that fans of lyrical rap still have a lot to love here. It’s been a lot complaints the group trying to go pop and in some instances, they do. But even on those songs, best believe it’s probably a display of lyricism somewhere. They also did a pretty good job of placing verses on songs which can be hard in a four man group.

If your a big fan of Slaughterhouse, you thrown off by a few songs but you’ll like the album because it still is Slaughterhouse. If you listened to the album just to see what the noise was all about, even with it’s drawbacks you’ll still get a glimpse of why Slaughterhouse is the best lyrical group in Hip-Hop today.