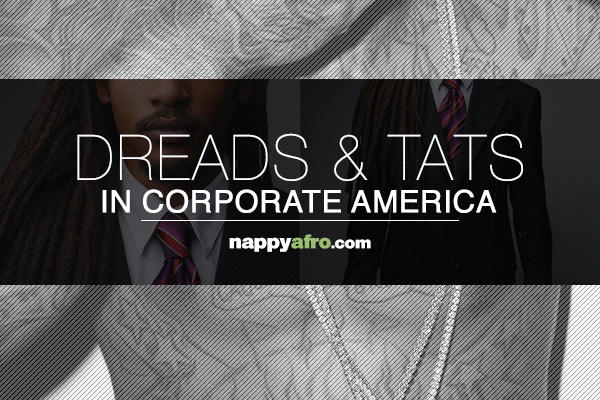 There is a old term that I’m sure that we have all heard, “You must dress for success”. Well I recently listened to the FROCAST Episode #57 (I know I’m late) and there was a serious debate about some comments that ESPN’s Stephen A. Smith made. In summary Smith declared that young Black people who would go out and get tattoos and dreads would not be able to succeed in corporate America.

Well there was quite a bit of uproar about this. Saule Wright seemed to be the most upset about the comments made by Smith. To Saules point, he is under the belief that people in corporate America who wouldn’t hire a young Black man with dreads, just wouldn’t hire a young black man period.

GQ-Blu seems to agree with Saule. He also goes on to make the point that Black people aren’t given the creative freedom to do whatever they want to express themselves as other races are. He explained that when “we” express ourselves in certain ways we are viewed as thugs and criminals.

King Jerm (#teamyoungnigga himself) actually seems to be more conventional with his thoughts. He believes that to be accepted into the corporate world you must fit a certain image. Although, he did admit that he is stuck in the middle.

Well I wanted to give my opinion, due to the fact that I now work for corporate America. I have a serious issue with the way that people took Stephen A. Smith’s comments. People, especially Black people, took his comments as disrespectful to his own race and felt that he had some kind of issue with Black people being proud of their ethnicity. I have to say that they are completely wrong about this man’s comments.

In all honesty, Stephen A. was absolutely right, but he communicated it wrong.

The fact is that when I turn around and have a conversation with a possible employee, I have been trained to look for three things:

Now don’t try and turn around and slay me because like I said he communicated his thoughts incorrectly. When he mentioned the issues of dreads and tattoos he was really looking at the stereotype that comes along with it. Companies don’t want to have someone looking like Lil’ Wayne and Lil’ John walking around their corporate offices. Can you have dreads and get a corporate job? Yes! You have to beware that you are putting yourself at somewhat of a disadvantage (on top of being Black).

I’m not saying that this is fair, or even right. I’m saying that there is still racism and prejudice and you need to be aware of it. If you have the courage to fight the corporate monster, all power to you, but you don’t change the game without playing it.