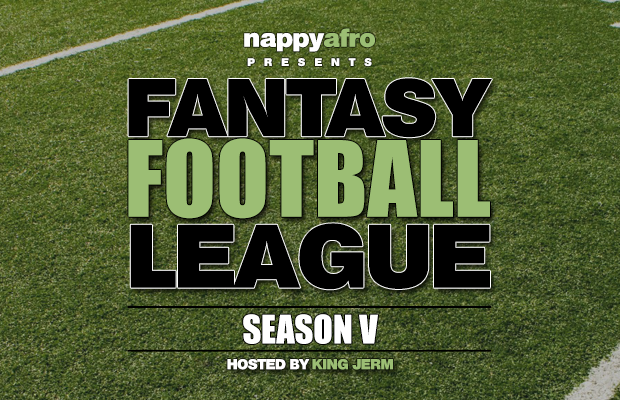 Well folks, I missed another week but have NO FEAR, it is back for another double shot! A lot of things are going on in the league and there is no better way to let you guys know than to show you the scores!

The battle of Jenk vs the King went like this: I WON! Maybe one day you will be good enough to beat me. BUT NOT TODAY! You getting better, Son. Dad will always be proud of you for trying.

GQ got back into the win category with a win over GomezJenkins. I had high hopes for Gomez coming into this season. I guess I was wrong.

LPH is showing flashes of greatness some weeks then some weeks he looks like the stuff you flush down the toilet. I suppose this would be one of the good weeks.

Tisha did the league justice by putting down GoHard420 like a horse with a broke leg. Hopefully he had fun the couple of weeks he was in first. Now can Tisha get it up to play the King next week?

Arkitekt keeps being the silent assassin. No words, just wins.

A lot of people have been going to the Doc’s office and making it out alive. The latest “patient” was Furoc. He went in for a check up and came out with a clean bill of health.

Filthy almost broke his own scoring record in as many weeks in this matchup. With all of this scoring, it’s amazing that this dude isn’t undefeated.

“The Oldest Rivalry in the FFFL” rekindled this week as Booker T took on Puffy. Just like all the other ones, Tisha beat the King…AGAIN! I don’t know why or how, but she seems to ALWAYS beat me in the regular season. I can’t do anything but give her props for CONTINUOUSLY whipping my behind!

GQ makes it two in a row with a win over Jenk. Maybe Jenk should go with a name change and reinvigorate the base. It could help. Look what it did for Furoc.

GomezJenkins gets off the losing skid with a win over Cyclone. I know this felt good for him seeing how has been at the bottom of the league most of the season. Maybe you could salvage your season after this.

Remember when I said LPH has flashes of brilliance? Well this didn’t pertain to this matchup here. He looked like DOG SHIT in this one! Better tighten up LPH!

Yep, nothing makes me happier than to see GoHard420 in the losing column. NOTHING! Good win Furoc!

Worst team in the league is DIRTY RAVENS. He continues to get punished week in and week out. But he is still out here making moves. Gotta love that.

Filthy’s lowest output of the year was just enough to make it up out the Doc’s office alive. She might need to do something fast because she’s falling down the ranks!