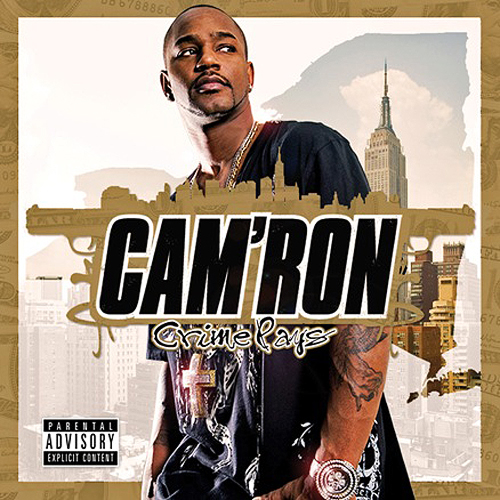 Cam’ron returns to the game after taking some time away to tend to family business with his sixth solo album titled Crime Pays. The man that was the leader of one of Hip-Hop’s most followed crews, the Diplomats, set A LOT of trends rapping with their slang and their style. Now that they are not together (NO HOMO) anymore, can Killa go from being LeBron to one man show role like D-Wade? If you ask me right now, I would have to say YES, but all that could change by the end of the album. Let’s find out!

Crime Pays Intro
Produced by Skitzo
Cam comes out the gate over some nice production just doing him. By that I mean just simply rapping and give you some comedic lines. So far so good.

Cookin’ Up
Produced by I.N.F.O & NOVA
Once again Cam looks like he hasn’t missed a step and still can spit like he did in the DipSet days. If you really think about it, Cam was Jeezy before Jeezy. That is exactly what Cam was bringing on this track.

Where I Know You From
Produced by Skitzo
Just when I made a Jeezy reference, this next song sounds just like “Get Ya Mind Right”. Don’t get it twisted, Cam put his own twist on it. I really like the hook on this one where Cam is injecting a new word into the vernacular: “Scrams”. CHECK FOR THIS ONE.

Fuck Cam #1 (Skit)
You know Cam always have the intros where he goes for the comedy.

Never Ever
Produced by Skitzo
This is one of those fun songs that Cam makes that we give him a pass for. I mean when you make songs like this, can I really take you serious? Is Cam’ron always this funny?

Curve
Produced by ARAAB Muzik & Skitzo
I notice the production on this one is DOPE. Cam is “doing him” but the way he rides the beat, got me nodding my head over here. By the way, Cam added “curve” to the hood vernacular. The song is pretty tight.

Silky (No Homo)
Produced by Skitzo
See this is another one of those fun songs that works for Cam, but we would bury someone else for trying to do. This song would have been dope had it been a DipSet group song, but Cam kept your interest through the whole song alone.

Get It In Ohio
Produced by ARAAB Muzik
This was the second “single” off the album that had the Midwest on smash. I’m not even from the area, but this song gets me hype. I do have a question: what does a gyro look like? Cam…really? DOPE SONG!

Who
Produced by Skitzo
This might be one of my favorite tracks off the album. The beat is SICK on this one. Then Cam is out there “doing him” with lines like this: “Got Louie kicks like a checkerboard/Will smack you/Then check your broad”. I can’t help but laugh and nod my head at the same time.

Grease (Skit)
Cam on the phone with some girl talking about taking dumps on each other’s property. The Set stay with the comedy!

You Know What’s Up
Featuring C.O. & Sky-Lyn; Produced by Skitzo
This song isn’t that bad, I have heard worse, it just takes too long to get to the rapping. They lose you in the first minute with all that singing. Cam puts up a respectable verse, but it’s too late because the feeling is gone.

Spend The Night
Produced by ARAAB Muzik
We have another one of those “fun” songs from Cam, but this one has Cam singing on some High School Musical steelo. He has some funny one liners, but I can’t fully vouch for this song.

Fuck Cam #2 (Skit)
Another skit where Cam hates on his own self.

Woo Hoo
Featuring 40 Cal & Byrd Lady; Produced by Skitzo
I can’t keep giving passes for Cam “doing him”, but this one is on the comedic side. I know that wasn’t the aim, but that is the way the album has turned.

Chalupa
Produced by ARAAB Muzik
Cam knows how to take a down south beat and put an up north twist on it to make it bump in both places. I really like this beat on this one, it simple but dope. Another new word has been added: “Chalupa”. Listen to the song and figure out how to use it.

Cookies-N-Apple Juice
Featuring Byrd Lady & Skitzo; Produced by Skitzo
Cam goes at the south with this one, but I’m not mad at him. For the record, I don’t not know what “Cookies N Apple Juice” means, but hopefully someone can clear this up for me. The beat bangs and I’m sure a dance will accompany this one. Check here for the video.

My Job
Produced by Skitzo
This was the first “single” off the album that got everyone checking for Cam. The song is one that everyone can relate to and it goes along with the current economic hardships that are affecting the world. DOPE SONG!

Homicide
Produced by Skitzo
Cam takes the simple beat and does his thing over it. This song isn’t anything special, just Cam “doing him”. Real Cam’ron fans will like this, but the average listener probably will not.

Fuck Cam #3 (Skit)
Same thing as the other ones.

Got It For Cheap
Featuring Skitzo; Produced by YH
This sounds like some old DipSet music, but it just seems like Cam said this on eight other songs. The song isn’t terrible, it just seems like we have been here before, and the hook is annoying!

Get It Get It
Produced by Skitzo
Cam finally raps about someone other than Cam’ron. He actually gets personal (kind of) but after all the comedy it is kind of hard to take Cam serious. The song is on the boring side.

Bottom Of The Pussy
Produced by Skitzo
Cam apologizes for hitting the bottom in this song. The song says it all, nothing to say here.

Fuck Cam #4 (Skit)
The last installment of the self hate fest. Call me crazy, but I think this was a shot at Dame.

Bottom Line:
This album was pretty good for Cam’ron. This is not a diss at Cam at all, because I like Cam’s music. I think Cam has little to no subject matter. He spit lyrics, some of them that don’t make sense, but his “swag” gets him by. Cam’s delivery gets him further than any lyrics that he says. Cam is a “Swag Rapper”; he might have even invented the art form. Rappers like this don’t give you much to work on except for good beats and nice punch lines. Cam is a vet in Hip-Hop and he did both of those on this album. The only knock is that at times it showed that he was out there just saying anything that came to mind. The album will satisfy the die hards, but it won’t stay in heavy rotation like some of his older works.