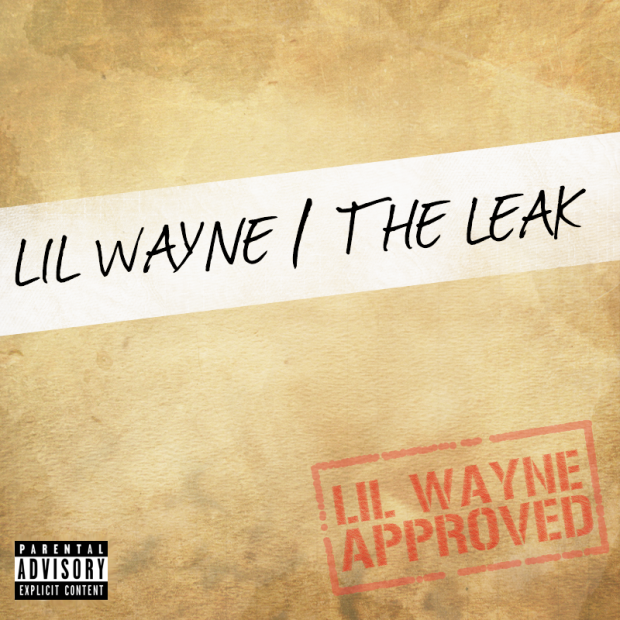 That dude Lil’ Wayne is a funny character; he got one passed us. After all the hype surrounding him, he releases The Leak on Christmas day with no promotion, no explanation, and no physical form (digitally available on iTunes, Rhapsody, and Zune Marketplace, etc; maybe the local bootleg man too). The EP quietly went on to sell 2,401 copies in its first week (Sales were not high enough to appear on the Billboard charts though). But damn, it was on the list. You know; the list of monthly releases on the nappyafro homepage to the right. Yep, we may be almost three weeks late, but if it’s on the list and it came out, we gotta review it. The EP itself is only five songs long and consists of material leaked from Tha Carter III. I not gonna sit here and act like we haven’t heard everyone of these songs already; mixtape DJ’s put out like four Lil’ Wayne mixtapes a day of leaked material. But, with all that said, here are my thoughts of The Leak.

1. “I’m Me”
The beat on this song fits Weezy perfectly. It stops a few times and you think the track it over but it starts again with Wayne giving you more. The song is your basic Wayne; talking shit, metaphors, etc. It has a hard hook complete with some nice lines: The only time I will depend is when I’m seventy years old/that’s when I can’t hold my shit within so I shit on myself/cause I’m so sick and tired of shitting on everybody else. Nasty.

2. “Gossip”
I think everybody remembers when Wayne premiered and performed this song on the 2nd BET Hip-Hop Awards. After that performance, people were looking for that song like crazy. A leaked recorded studio version showed up days later though. King Jerm told me the live version was better than the studio version and I agree. You remember when an early copy of Common’s BE album leaked and they had a studio version of “The Food”. But when the official came out, they put that Chappelle’s Show version back on that bitch because it was better. This is still a good song though, just not better than the live emotional version. Now, let’s just wait to hear the studio version of “Pussy Monster”.

3. “Kush”
Can you guess what this song is about? I’m happy this won’t be on The Carter III, I really don’t like it. The beat is not doing for me with its faux island feel. The hook is suspect too; And we smoke that kush, and we ball like swoosh. I can actually see people singing this one in the club though; but those are the same people that were saying “Totally dude” last year also. The lyrics aren’t up to the same quality as the previous two tracks either. Well, these are the tracks that are not going to be used.

4. “Love Me Or Hate Me”
This track has a surprisingly epic feel. It just gives Weezy more room to do what he does best; Share my blood, feed my family/my flow will plead insanity/so sick I need Grey’s Anatomy/acid like a bust open battery. I may not be the biggest Wayne fan, but what I give him credit for is not rapping over one type of track. Even though he’s from the South, he not afraid to jump on track that doesn’t have snaps or loud 808’s. While this song may be retread of shit he’s already said on track one, it still wins.

5. “Talkin’ Bout It”
The hook on this one had Wayne sounding like the “Back That Azz Up” Wayne. There’s nothing wrong with that, but it does make me think of one problem I’m having here. Lil’ Wayne major problem with me is his ability writing actual songs. On this track, Wayne does what you probably have heard him do a thousand times before. What separates the greats from the junior varsity league however is the ability to write songs that stretch their ability and show storytelling skill (ex. Pac’s “Brenda’s Got A Bay” or Biggie’s “Somebody’s Gotta Die”. While this song is not terrible by any means, it just makes me wonder.

Bottom Line:
Is this EP worth the money? No, not if you already have all the songs here. But then again, it’s only $3.16 at Amazon.com. So if you’re a hardcore Weezy fan, I guess that’s a deal. Does that make me anticipate Tha Carter III more? Of course, I’m a fan of Hip-Hop. Last year, XXL magazine ranked Tha Carter III the most anticipated album of ’07. Well, it’s 2008, and it’s still the most anticipated album. I hope Wayne can deliver it this year, you don’t wanna it to reach Detox status; and then he’ll never be able to live up to that kind of hype.