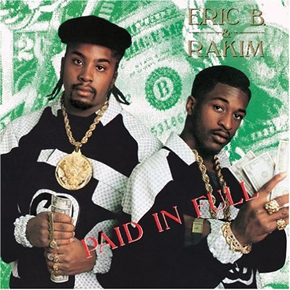 It’s been a long time, we shudnt’a left you, without some Eric B. & Rakim to nod to. How do you have a classic section without arguably the best emcee of all time You don’t that’s how. This tape (when I bought it) is a staple in any Hip-Hop catalogue. Rakim revolutionalized the rap game with new ways of rhyming along with some of the most timeless beats ever done. I watched an interview with him where he said he would draw lines down his paper to divide it into 3 columns. He would then write his rhymes and when he got to the spot below another word, he would rhyme right there, in the middle, front, or end of a bar. You don’t have to look much father than their debut album, Paid in Full, to know how successful his determination and dedication to his craft was. Let’s not forget that his name was preceded by Eric B.’s name. His DJ skills and production helped solidify this duo as one of the illest in hip hop history. Paid in Full is certified platinum on the strengths of hits like “Paid in Full”, “Eric B. Is President”, “I Ain’t No Joke”, and “Move The Crowd”. Proving quality over quantity, 9 songs of pure heat vaulted this album to the top of MTV’s 10 greatest Albums of All Time in 2006. You can deny my opinion along with most any other music publication or program if you want, but the first verse of “Paid in Full” is probably one of the most widely known verses ever. Don’t believe me? Put it on, see if everyone doesn’t rap…

Thinkin’ of a master plan
Cuz ain’t nuthin’ but sweat inside my hand
So I dig into my pocket, all my money is spent
I dig deeper bit still comin’ up with lint
So I start my mission- leave my residence
Thinkin’ how could I get some dead presidents
I need money, I used to be a stick-up kid
So I think of all the devious things I did
I used to roll up, this is a hold up, ain’t nuthin’ funny
Stop smiling, be still, don’t nuthin’ move but the money
But now I learned to earn cuz I’m righteous
I feel great! so maybe I might just
Search for a 9 to 5, if I strive
Then maybe I’ll stay alive
So I walk up the street whistlin’ this
Feelin’ out of place cuz, man, do I miss
A pen and a paper, a stereo, a tape of
Me and Eric B, and a nice big plate of
Fish, which is my favorite dish
But without no money it’s still a wish
Cuz I don’t like to dream about getting’ paid
So I dig into the books of the rhymes that I made
To now test to see if I got pull
Hit the studio, cuz I’m paid in full.