Ludacris – Theater Of The Mind [Review] 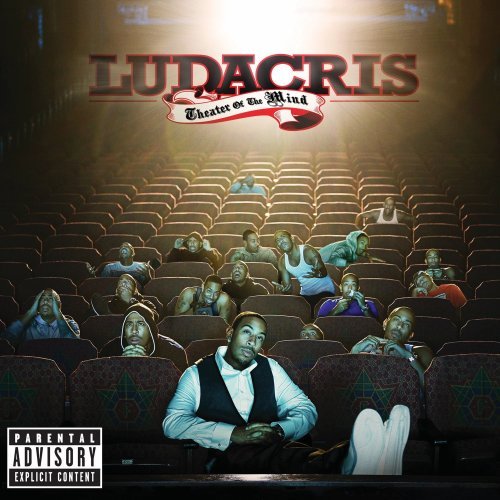 How do you label Ludacris? Is he a southern rapper? Is he a Hip-Hop mogul? Is he a rapper-turned actor? To me Luda is all of these, and none of these. When you think southern rap, you think of guys like Shawty LO, Soulja Boy, & Gucci Mane. I hope everyone can agree that Ludacris is on another level compared to those dudes. When I think of the word mogul, I imagine Russell Simmons, Jay-Z, & Suge Knight. These are people you can clearly associate to a record label. When I say Russell Simmons, you instantly think of Def Jam, Jay you instantly think of the ROC, and Suge you (hopefully) think of Death Row. When you think of Luda, DTP isn’t the first thing that comes to mind. Sure it’s a successful label, but Chingy is the only artist most people will recognize (and that’s saying something). As an actor, Ludacris has chosen great roles, but always gets stuck in a supporting role. Look at the movies he’s been in: Crash he plays the thief, Hustle & Flow he plays the successful rapper, and in Fred Claus he plays a DJ. 2 Fast 2 Furious is the exception. But as a recording artist, Luda has earned his place among Hip-Hop royalty. Theater Of The Mind has the potential to go Gold (maybe platinum) before the end of 2008. After that long-ass intro, you’re probably asking how is the album? Well…

1. Intro
Produced by The Runners
I was scratching my head for the first 40 seconds. But once the beat kicks in, this transforms from your average Intro to “Ultimate Satisfaction Part II”. Same slow beat with the strange loop, and the same Luda with the rapid-fire flow. I was pretty impressed with Luda’s lyricism until the last 30 seconds which is just filler. At the same time it’s an above average rap-intro, what more can you hope for?

2. Undisputed
Featuring Floyd “Money” Mayweather; Produced by Don Cannon
Floyd Mayweather is the first of four random celebrities to pitch in with a vocal sample. Didn’t really add anything to the song. This was a sick-ass track though. The beat was nice, I can see this being the new Don Cannon beat to freestyle to. But when it comes to the wordplay, my jaw dropped: “And if you sittin’ on chrome/I’ll call up my boys and have you stripped of ya medals like Marion Jones”. “Luda leaves intruders stretched out like gymnastics/And acrobatics I’m superstar status/The mouth of the South like Gangsta Grillz you bastard” This is a fucking banger!

3. Wish You Would
Featuring T.I.; Produced by DJ Toomp
Like Luda said “It was bound to happen sooner or later”. The two real “Kings of the South” sound real good over this bouncy Toomp instrumental. And they spit some straight crack for almost five minutes. And for once I can honestly say, I was really feeling the hook on this track.

4. One More Drink
Featuring T-Pain; Produced by Trackmasters
After the two songs above this track fucking sucks. It’s not a terrible track, but it’s clearly a single. You might hear this one in the club, but I’d advise you to skip it. It’s featuring T-Pain; that should already tell you something.

5. Call Up The Homies
Featuring The Game & Willy Northpole; Produced by Clinton Sparks
Not bad. Game and Luda exhibit some good storytelling here, over Clinton Sparks’ Dr. Dre-esque beat (with the heavy funk instrumentals). Willy Northpole’s verse seems out-of-place, but it was weak to begin with. I’m guessing Luda just stuck him on the track to improve the youngn’s sales since he’s signed to DTP. This might be one you will have to repeat.

6. Southern Gangsta
Featuring Rick Ross, Playaz Circle, & Ving Rhames; Produced by StreetRunner
Ving Rhames’ handles all the rapper’s introductions. Sounds like an MC introducing boxers before a fight, which is funny considering Ricky Ross is on this track. Luda turns in a good 16. I’ve never been a Rick Ross fan, but this is one of his better verses (from what I’ve heard anyway). And for the second track in a row Luda gives his DTP weed carriers a guest spot to bolster there sales. Still the same result, Playaz Circle sounds just as awkward on this track as Willy Northpole sounded on “Call Up The Homies”.

7. Everybody Hates Chris
Featuring Chris Rock; Produced by Don Cannon
Don Cannon is a much better producer than he gets credit for. DJ Drama doesn’t hold a torch to this dude, and I’m glad Luda realized it. Another sick beat, but Luda didn’t really hold my attention on this one. His lyrics fluctuate from generic to sick after every bar. And the hook…. Come on Luda!

8. What Them Girls Like
Featuring Chris Brown & Sean Garrett; Produced by Darkchild
This was the first single if I’m not mistaken and it’s nothing you should ever check out. Ever! Not saying it was downright terrible, but why waste your time?

9. Nasty Girl
Featuring Plies; Produced by Swizz Beatz
Another one for the ladies. This song left me wondering who actually bought Plies album? Really? You can enjoy that shit? Really?…Proof that anyone can be a successful Rap artist these days. Who needs flow and lyricism when you can loudly babble into a microphone? That’s what I want to hear! Smh.

10. Contagious
Featuring Jamie Foxx; Produced by Scott Storch
Yet another song for the ladies. This album has really taken a downward turn. On a random note, you’ll probably never guess that Scott Storch produced this track. It’s almost nothing like any of his previous work.

11. Last Of A Dying Breed
Featuring Lil Wayne; Produced by Wyldfyer
And we now return to the album called Theater Of The Mind. You can tell Luda saved his best lines for this track. Even though this wasn’t a single, this is probably the track everyone will skip to once they cop this album. Lil’ Weezy on one of your tracks is a bonafide way to sell records these days. As for the track, Wyldfyer provides a perfect instrumental for this head-to-head face-off. To me this was the song where Luda shows the world that he can flow with Weezy and hold his own. The first verse set the mood, and set up Wayne’s verse perfectly. I’m no Wayne stan but I’ll admit he came with a pretty sick verse too, even though his voice sounded hoarse as hell (lay off the lean homie). On a sidenote, it’s pretty fucking funny to hear Ludacris make a song declaring himself to be “One of the last lyricists alive”, when that’s nowhere close to realistic. And how do you possibly feature Lil’ Wayne on this song when he was partly responsible for the death of the MC? Aside from that hypocrisy this song was pretty good.

12. MVP
Produced by DJ Premier
Damn. Who would have ever thought Ludacris could secure a Primo beat? At the same time, who really wants to hear Luda over a Primo beat? No one. Even though I’m a fan of both artists, they don’t really sound too good together. I doubt this song will have much of a fanbase, aside from heads wondering how Luda got this beat. Seriously, first Termanology, now Ludacris. What’s next, DJ Premier producing Soulja Boy and 50 Cent?

13. I Do It For Hip Hop
Featuring Nas & Jay-Z; Produced by Wyldfyer
I was really disappointed with this track. Everyone came with their C game. Besides Wyldfyer (the producer) who came with his F game, this instrumental is terrible. Add Luda’s obviously hypocritical lyrics to Jay and Nas’ uninspired lyrics and you get this mess of a song.

14. Do The Right Thang
Featuring Spike Lee & Common; Produced by 9th Wonder
This is a pretty soulful send-off. It took me a few listens to fully appreciate 9th Wonder’s optimistic contribution and I’m still not really feeling the beat here. But it’s a good track, decent way to end this album.

Bottom Line:
I felt that Ludacris tried way too hard to make everyone happy on this album. He made a few bangers, a few songs for the ladies, and a few songs for the heads. I’m sure his fans will gobble up this album and tout it as a classic, but for people new to his music this may not be the best place to start. Just by looking at the musical features you can tell how different the songs are. T.I. & Nas, Common & Lil’ Wayne, DJ Premier & Plies… those names just don’t sound like they would ever be together. And that is what makes this album hard to listen to at times.

I got one thing to get off my chest. I don’t always agree with the ratings on this site. I don’t think Theater Of The Mind is an amazing album or even in the top 10 of ’08, but it is better than Paper Trail & The Recession in my book, so that’s why it got the rating it got. And because I know y’all would leave angry comments.

Update: Okay, maybe it was a little high

nappyPicks: “Undisputed”, “Wish You Would”, “Call Up The Homies”, & “Last Of A Dying Breed”