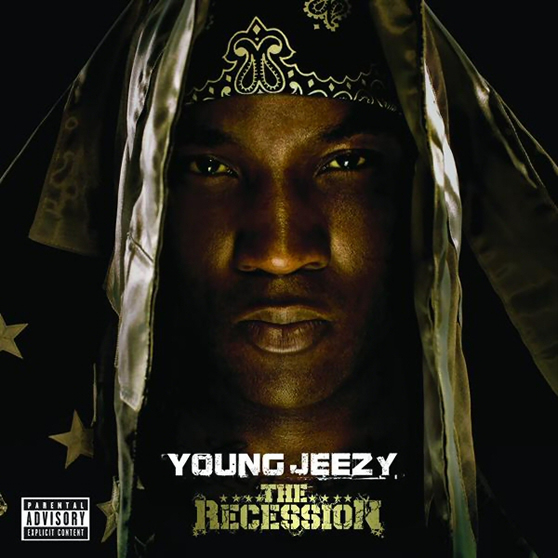 Having taking a 2-year break from releasing his solo albums, Young Jeezy returns to streets with his album The Recession. Jeezy burst onto the scene in 2005 with several mixtapes and one of the South’s best albums ever…Let’s Get It: Thug Motivation 101, and his follow up The Inspiration in 2006. A lot has changed in the country since the Snowman last dropped, hence the name of his new album.However, following a campaign by his website usda2day.com that released a new song at 9:02 every Tuesday until the album dropped built a nice buzz that got the streets hype for the new Jeezy. Nevertheless, will it work? Let’s see!

The Recession (Intro)
Produced by DJ Toomp & Boogz
What can I say about this one but Toomp provided the beat (with some help) and Jeezy supplied the lyrics. The result, a FIRE ass intro and title track for the album. Jeezy is flowing like its 05’ again! HOT!

Welcome Back
Produced by Squkey Clean
This track title speaks volumes…”Welcome Back”, because that is exactly what you’re getting. You got Jeezy spitting over a bass heavy beat that will surely be banging out of an old school in a hood near you. Jeezy is giving it to you as he used to. I LOVE IT!

By The Way
Produced by Terry “T.A.” Allen
Jeezy is still on that Trap Or Die steez on this song, and the hardcore Jeezy fans will like this song. The track is tight, but the hook is repetitive, but that doesn’t stop the hotness.

Crazy World
Produced by Midnight Black
This is one of the songs that were leaked and it had the net buzzing then, and will have the streets buzzing when the public hears this one. Jeezy once again is given some nice production that he puts his slick wordplay over. BANG THIS ONE!

What They Want
Produced by Midnight Black
The production continues to be a problem on the album…and I mean that in a good way! This is one of those “dopeboy” songs that has that thunderous bass line that will have the trunks rattling everywhere. Jeezy is still spitting as if he’s doing his mixtape thing. BANGER!

Amazin’
Produced by Drumma Boy
They are making it too easy for Jeezy on this album with this good production. Jeezy is giving it to you raw with more street lyrics and more SWAG than anybody in the game. I love the hook, “Bitch I’m amazing, look what I’m blazing/Eyes so low look like I’m Asian!” That is Jeezy on that shit again! HOT!

Hustlaz Ambition
Produced by Drumma Boy
Jeezy really has taken it back to his essence on this album and that continues on this track. He raps over a slowed up, bass thumping beat provided by Drumma Boy. He lets everybody know that he still has that hustler’s ambition that shot him to the forefront of the Southern rap scene. HOT SONG!

Who Dat
Featuring Shawty Redd; Produced by Shawty Redd
Jeezy promised that this album was for the streets, and he hasn’t lied so far. This one will be playing at the clubs, but not that type of club song. I’m talking about the kind where people will be throwing their sets up. The beat is commanding and Jeezy once again delivers.

Don’t You Know
Produced by Midnight Black
Jeezy is once again given a license tag-cracking beat that he just rides and murders. I’m sure Rocko is looking like, “So this is how you supposed to do it?” Yes, Rocko, Jeezy shows you how to do “Swag Rap” on this track. BLAZING!

Circulate
Produced by Don Cannon
Jeezy tries something different on this song taking on some 70’s sounding production (“Let the Dollar Circulate” by Billy Paul is sampled). It’s a different sound from Jeezy, something you would expect from Hova, but Jeezy handles it well. This one will have to grow on the average Jeezy fan. However, can you knock a man for trying something different?

Word Play
Produced by J.U.S.T.I.C.E. League
“You niggas want word play but I’m about bird play!” Jeezy is addressing all the haters who said he killed Hip-Hop by talking about drugs so much. Yeah, like he was the first to talk about drugs on his albums. But how can you hate on someone who talks about drugs so well? CHECK FOR THIS!

Vacation
Produced by The Inkredibles
Jeezy is giving a shout out to the whole city on this track, but the production is slowed down and Jeezy does his usual on this one. This is the first song that I can consider filler.

Everything
Featuring Lil’ Boosie & Anthony Hamilton; Produced by Street Market Music
The first real feature of the album features Lil’ Boosie and Anthony Hamilton and I must say that this might push Boosie to the next level by being featured on the album. Mr. Hamilton returns to croon his Southern melodies on records. The two mix well along side Jeezy on this song.

Takin’ It There
Featuring Trey Songz; Produced by FATBOI
When I saw Trey Songz featured, I should have expected a song for the ladies. Well I’m not mad it took 14 songs before we got one. Don’t get it twisted, it’s a Jeezy song about girls. You don’t have to worry about Jeezy singing to the ladies or anything like that! Is Trey the new R&B bad boy?

Don’t Do It
Produced by DJ Pain 1
This track right here is that CRACK! The song has some pain to it, but the only thing is missing is MJB (Mary J. Blige)! Jeezy came hard over a retro sounding beat again, and with the way he’s pulling it off, he might want to experiment with this some more. BANGER!

Put On
Featuring Kanye West; Produced by Drumma Boy
The song of the summer of 2008 hands down! You got Jeezy & Yeezy over a Drumma Boy beat, and it’s an instant classic. The remix with Jay is SICK! But you have all heard this song, and if you haven’t…GET FROM UNDER THE ROCK!

My President
Featuring Nas; Produced by Tha Bizness
“My President is black, my lambo is blue, and I be gotdamned if my rims ain’t too!” Nas and Jeezy jumped on a track and made some good music. I didn’t think that the styles would mesh well, but they did. I still don’t like politics coming from my rappers, but I guess Jeezy has to do his part to motivate the streets. HOT SONG!

Bottom Line:
When we talk about albums of 2008, this will definitely be on the list. Jeezy not only returned to the essence, but he’s rapping like he’s in his prime now. Jeezy promised that this might be his best work, and I find it hard to argue with him. I did notice the absence of his CTE family, but he did have some interesting features Kanye, Nas, and Boosie. Jeezy showed the world that he is back and ready to reclaim his spot as the voice of the streets. Like I said earlier, when you give a rapper like Jeezy good production, he has no choice but to deliver heat like he did for 18 tracks. You can listen from top to bottom to this album.