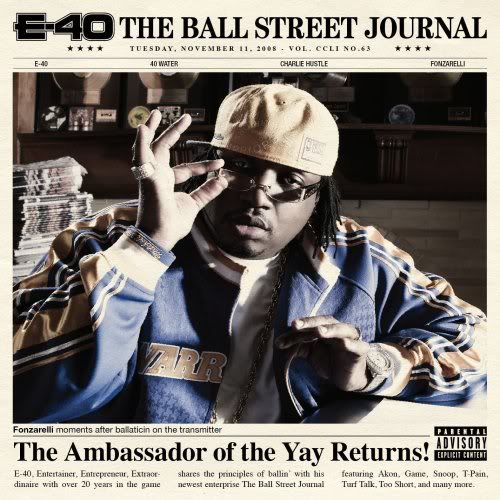 One thing about E-40 is that he never compromised his sound one bit. The 40 we are getting now is the same 40 we were getting back in the day. This time a little older, a little wiser and hella paid. The West Coast vet has been in the game nearly twenty years and has managed to stay relevant in a fragile Hip-Hop state. That just shows you how much of a hustle it takes to make it that long. To top it off, try doing that as an independent. E-40 returns with his latest album titled The Ball Street Journal. E-40 got some major spins off his last offering. Now can he follow that up with another success?

Ambassador
Produced by Rick Rock
40 jumps out the gate to a club sounding beat where he states his position in the game. Nice beat that I imagine has the clubs around the Bay jumping. Nice start to the album.

I’m On One
Produced by Rick Rock
The up tempo beats continue to make you nod your head, 40 mixes a little of “The Show” into the song. E-40 continues to do his thing on the track, and I have to say it was a success.

Break Ya Ankles
Featuring Shawty LO; Produced by Lil’ Jon
A weird collabo, weird title, and a redundant Lil’ Jon beat doom this song from the beginning. Not that I would want to break my ankles while I’m dancing, but the lack of rhymes of LO and the wackness of the beat supplied by Lil’ Jon, makes this a loss in my book.

Got Rich Twice
Featuring Turf Talk; Produced by Droop-E
40 is back in his element on this song over a hyphy influenced production. 40 sticks to the same formula that has been keeping him relevant in the scene for 20 years. The song is decent; nothing that really stands out though.

Pain No More
Featuring The Game & Snoop Dogg; Produced by Jonathan Rotem
Three heavyweights from the West hook up on this BANGER! The production is tight, but what did it for me was the hook. The Game gives us his typical name drops and punch lines, and Snoop, well he did his best Snoop Dogg impression. The song is worth a listen so CHECK IT OUT!

Tell It Like It Is
Produced by Rick Rock
40 speeds the flow up on this one over some manic sounding production. The beat is FIRE by the way. 40 is just flexing his seniority card in the game on this one. When the seniors are talking, the youngsters need to pay attention.

Give Her The Keys
Featuring & Produced by T-Pain
T-Pain joins in to give 40 that commercial song that might push more units. The bass heavy beat will have the girls dancing to this one. Not only is this song aimed at the female crowd, but also it’s actually a good listen.

Hustle
Featuring Turf Talk & R. City; Produced by Lil’ Jon
What would an E-40 album be without his favorite topic hustling? This song isn’t all that, the lyrics are kind of elementary on this one. I’m going to even say that this song is kind of cheesy. NEXT.

Wake it Up
Featuring & Produced by Akon
E-40 is pulling out all the tricks on this album. He went out and got everybody’s favorite African, Akon, to make a song that sounds just like every other song that he is featured on. I can’t wait to see the club when this one comes on.

40 Water
Produced by Lil’ Jon
This song will have the heads “dumbing out” on the dance floor. I bet he says the words forty and water 50 times in the song. I have to tip my hat to the vet for the concept of the song and the usage of the words.

Poor Mans Hydraulics
This song is dedicated to the people who do the car tricks. The beat is sick and the lyrics meshes well with what he has going on in the song. Not a real deep song here, just something to play in the ride.

The Recipe
Featuring Bun B & Gucci Mane; Produced by Poli Paul
The hook tells you how to make cocaine into crack. Do people even smoke crack anymore? E-40 on a song with Gucci and Bun B is unusual collabo. 40 didn’t seem to be comfortable on the track, but Gucci was right at home with this one. Bun stayed consistent, dropping his usual 16. HOT SONG.

Hood Boy
Produced by Raw Smoov
This song will damn sure catch the ladies with the production and the hook. I can’t front, even I like this. 40 made a song for all those girls that love them bad boys. BANGER.

Earl
Featuring Ice-T; Produced by Lil’ Jon
Two of the OG’s of the West coast Hip-Hop scene collaborate on one of the hardest beats I have heard all year. The beat has “Colors” mixed in, but the lyrics are straight GANGSTER.

Sliding Down The Pole
Featuring Too Short
I wonder what this song will be about. The biggest names in Oakland come together to make this ode to the women of the performing arts. It will serve its purpose, but is it a good song? No. This isn’t something that you would listen to in the house or ride.

I Can Sell It
Featuring Cousin Fik
Charlie Hustle is just telling how he can sell anything. Nothing major here, decent production, but nothing special. What’s crazy is the weird auction that is at the end of the song. NEXT.

Big Time
Featuring Kevin Cossom; Produced by DJ Nasty
E-40 gets an Akon impersonator that actually did a good job on the hook. I like the production on this song and 40 kept it understandable. Good drop by 40 Water.

Alcoholism
Featuring B-Legit
E-40 teams up with his partner in rhyme for a song about the boys getting drunk; one of their favorite pastimes. This song is on the wack side, so I’m going to have to say SKIP this one.

Pray For Me
Featuring Bosko, Suga-T, & B-Legit; Produced by Bosko
75% of the time artists tend to end their albums with songs that sound like this. I think that this song closes the album out well. B-Legit gets in on a better song this time around, and 40 should be happy with the results of this song.

Bottom Line:
E-40 came back out strong with this album. This album was not on my radar for albums that I was anticipating. I was surprised to like as many as the tracks on the album as I did. E-40 stuck to the script that he laid down years ago. When rappers that have a proven formula that works, they need to stick with it. 40 gave the people the kind of beats they wanted over the same kind of lyrics that he was known for. A simple recipe that E-40 nailed. The Bay Area Ambassador can feel good about this release.