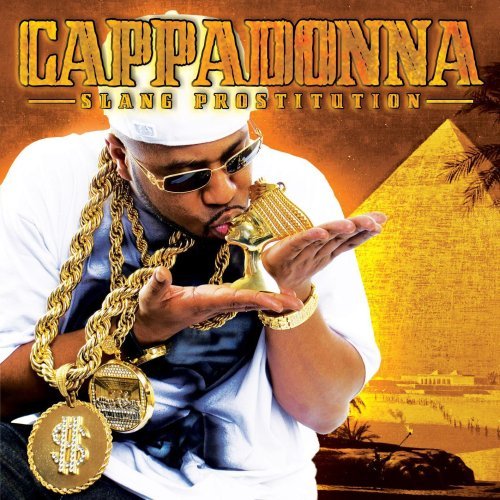 Cappadonna’s career in Hip-Hop has been an interesting one. While he had stellar appearances on Wu-Tang branded albums such as the classic Only Built 4 Cuban Linx… and Wu’s 2nd album Forever (Just to name a few), there always was the question…is he in Wu-Tang or not? I mean, one moment he a member on The W and then the next he’s airbrushed off the Iron Flag cover (I know he had problems with RZA. Who doesn’t have problems with RZA?). And after being heavily featured on Ghostface’s Ironman (as well as the already mention Only Built 4 Cuban Linx…), I always felt Cappadonna’s first album, The Pillage, should have been more in the vain of those albums (I know a lot of people like that album but not me). Cap’s solo career has been up and down since. He’s released seven albums including a greatest hits album and for some time during 2001, he drove a cab in Baltimore to feed his family (Hey, a man’s gotta do what a man’s gotta do). All that aside, I really don’t know what’s the anticipation for his seventh album Slang Prostitution. At first I wasn’t gonna review this album, but then I remember Cappadonna’s verse on “Ice Cream”; dude killed it! I can at least give it a listen right (Even after I saw the cover to his last album)?

1. You Can’t Keep A Good Man Down (Part 1)
The album starts off with Cappadonna rapping a capella. He goes into his past struggles and how his “lablemate brothers” turned on him. Okay. I guess this will do.

2. Savage Life
Produced by Digem Trax
The track starts out with a portion of The Last Poets’ “Wake Up, Niggers” and this goes to a chopped piano sample. The production matched with Cap’s non-inspired flow makes the song boring. The hook is also a little lazy; “You wanna see what the savage like, but we living the savage life…”.

4. Walk With Me
Featuring Joey Lee (aka Skinslaya); Produced by 3rd Diglah & G-Clef Da Mad Komposa
This had a chance to be the best song on the album; the use of the soul sample here works…until you get to the hook. I swear that was Cappadonna singing. The song has Cap talking about finding the right girl (“Look baby, all I really see is a queen…”). If you can get past that terrible hook, you good.

5. Do You Remember?
Produced by Q-Dini
Cappadonna does the standard “back in the days” song. On the hook he even does the chorus from The Intruders’ “Cowboys To Girls”…badly; “Do you remember? When we used to play shoot ’em up…”

6. That Staten Island Shit
Produced by Digem Trax
I guess this is supposed to be the “club song”. It’s not terrible, but did they really need the finger snaps? The hook is genric; “It’s that club type shit that make you nice” Huh?

7. Stories
Featuring Jo Jo Pellegrino & 3rd Diglah; Produced by Digem Trax
Where the hell has Jo Jo Pellegrino been? Over a chopped sample, all three rappers on the song don’t really go with the formula. Cap does, and does his best Ghostface impression as he raps about tales in the hood. The rest just do their regular.

8. Lifes A Gamble
Featuring Raekwon & Ratchet; Produced by Rush
If the whole album sounded like this, I wouldn’t be dreading that I’m only on track 8. This song doesn’t even fit because the quality level is just so higher that the rest of the track. Raekwon starts off and does his thing; Ratchet takes the song though. And the beat is hot; Rush should have definitely done more beats for this album.

9. Hustle And Flow
Produced by B.T.
“I am hustle and flow!”. Naw, the beat here sounds like amateur night. Nothing here to bring you in. It sounds like Cap is just saying shit; “The rap shit is kinda like sex to me, when I bust one nut on the M.I.C.”.

10. You Can’t Keep A Good Man Down (Part 2)
More a cappella rapping like in the intro.

11. Pistachio
Featuring Loung Lo, King Just, & Lugar; Produced by Soul Professa
This another soul sample heavy track that could have been better. At this point, I know that the Cappadonna of old is gone when he is the main one bringing down his song on posse cuts. The rest of the rappers here are typical. Again, nothing to write home about. The hook is awkward too.

12. Grungy
Featuring G-Clef Da Mad Komposa; Produced by Q-Dini
Right when I write Cap off, he sounds a little inspired here; “Cab driver with the black Range better life nigga. Theodore Unit, down with Trife nigga. You might see me in the hood chillin’ with a white nigga. Pushing something big with a tight insignia”. The production is also good. But G-Clef? His name is too long to be so bad.

13. What’s Really Up
Produced by 3rd Diglah
3rd Diglah does his best RZA impersonation on the beat but something is missing. It’s not a boring hook, because Cap provides one.

14. Da Vorzon
Featuring Lounge Lo; Produced by Blastah Beats
I see what they were trying to do with this but it just doesn’t work. The somber piano loop doesn’t go with Cap’s tone (Which seems to be almost always off).

15. Somebody’s Got To Go
Featuring Lounge Lo & Ghetto Philharmonic; Produced by G-Clef Da Mad Komposa
Another good sample that could have been better. It starts out good but this it loops a old man singing “Somebody’s Got To Go” (I couldn’t find the sample name; I’m sorry). It’s kinda awkward. The actual rapping is…just lazy.

16. Fire
Featuring Masta Killa; Produced by Chicargo
I starting to think that he recorded the song with Raekwon and Masta Killa first and then just threw some songs around it. The quality of these songs are just better. Then I really listen to the verses and for some reason they bleep out when Cap says the year; must be an older song. The rapping can get boring but the beat is well produced.

17. Speed Knotz
Featuring Percise; Produced by N.E.S.
This is the first song I heard off this album…and it almost made me not listen to this album. The good thing about this is it’s only two minutes. It sounds like a throw away Wu-Tang song.

18. Stay Shining
Produced by Digem Trax
Okay, I don’t mind this one. The beat reminds me of something a younger Kanye would have made with the drums and such. Cappadonna drops some knowledge and tells the hood to keep shining; I can’t even take away points for him singing on the hook.

Bottom Line:
I know for a fact that if I didn’t have to review this album I wouldn’t have listened to it. Sometimes that’s a good thing; you listen to good music you never would have heard. But then there are times like this when it feels like a chore. But with the lack of releases, I tore out my “skip” button and endured. I don’t hate that Cappadonna is still trying to make music, I just hate that I had to listen to it. This album had no real purpose and lacked style (Not swagger, that’s different. I hate swagger.). With the exception of a few briefs moments, this album is not one to seek out.