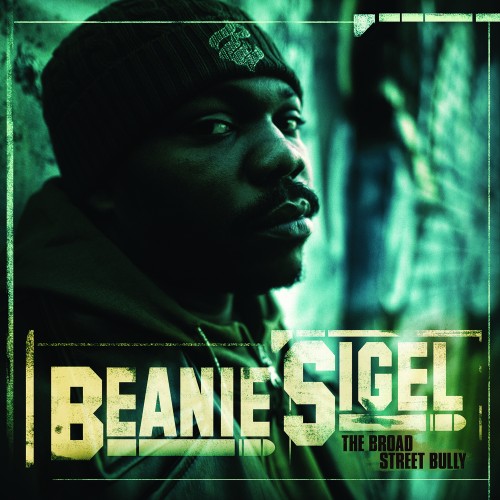 If one were to chart Beans’ career/hype on a graph, it would look like the Rocky Mountains. Of course when The Roc was doing things and making noise, it was at it’s zenith. Beans definitely benefited from the influence of Sean Carter as well as being the quiet head of State Property. Since then, things are murky. Siegel has hit the mixtape circuit and put out some nice work in doing so. So what does he have in store for us on this Siccness “official” release?

2. Why Wouldn’t I
Not a bad track at all. I think that’s either the Guiding Light or some other soap opera theme playing in the back for this track. It still works though. The drums and clap add some additional depth to this one and the tempo keeps ya’ head in motion. Lyrically, Beanie comes at us with what sounds like a battle rhyme set to music. He’s not playing at all. Aggressive, angry, and assured could have been another name for the real lead in song for the album. This is a great jumpoff for the album.

3. Tear Drops
Another banger here. I can’t front on the beat either. I won’t say it’s a high quality or complex sounding track, but I really like it….until we get to the hook. The song kind of falls apart there. Not just musically, but the production and mixing just seem to be lackluster there. As far as the lyrics go, it’s not bad. With references to Tyrese/Waist Deep, “Chicken Noodle Soup”, and “Harlem Shake”, he’s intent on just saying things that work, but not make you take notice.

4. Where’s My Opponent
Featuring Omilio Sparks & Freeway
Bounce and church chords…okay. It’s not a bad beat, but it gets irritating and boring quick. The recurring chord has been used so much, I can’t even remember the original song it was from. The song has a cypher feel in that it’s just three cats jumping on a beat, the uniting factor is bullets. Basically, you get killed by three different dudes on here. Moving past that part, lyrically, I’m not overly impressed with any of the verses on this one.

5. Ready For War
Featuring Freeway & Young Chris
Young Chris obviously studied Jay’s flow and delivery. If you’d adjust the audio, you could think it was him. Freeway tries to slow down but stay intense on this Curtis Mayfield sounding beat. Sigel plays the closer on this one, but I’m not sure what he’s closing. This soulful track is one of the better produced offerings on the album.

6. All For It
At first, I’m hyped with the way the beat starts and Beans is on it. There is no intro, no lead in, nothing. Soon as you get to song 6, it starts. While I think this is a great time in the album for Beans to return tho this type of track, the track itself, again, get’s annoying quickly. It’s just on a loop and it becomes grating after a while. The other problem is the sample in the hook…we been seeing it too long in commercials for it to be credible or even take the song seriously. Sigel issues out what sounds like a open challenge to any of you “YouTube niggas” that want to get it.

7. Sicker Than Your Average
Featuring Freeway
This is another soulful track that I really dig. The name and sound go with each other perfectly here. Freeway sounds fantastic on this track. He really owns this song and probably should have stole it for one of his releases. Unfortunately for Sigel, he doesn’t step up to the challenge on this one enough to be memorable over what Freeway spit. I have no idea what’s going on with the hook on this one either…but that’s not new. I’ll explain later.

8. Run To The Roc
Featuring Young Chris & Omilio Sparks
Jamaican influence in full tow down to the sample, this song is completely different from anything else on the album. (If anyone knows the sample for the hook, let me know.) I won’t pretend to know what happened between Beans and Jay, hell, I don’t know that anything happened, but this song can definitely feed the idea that they fell out. The concept is that someone you lean on, someone who is your rock, isn’t there for you like they said they would be. Each rapper references Judas and “big homie” not standing by their side. I think we’re getting some inside info on this one.

9. Bang Bang
Featuring Murda Mill
This song disappoints me. The track is okay, but the production is terrible. I feel like Beans and Murda are yelling over a really low beat. The hook is disgustingly bad and the lyrics are elementary in comparison with the rest of the album. SKIP

10. Return Of The Chain Gang
Featuring Young Chris
Okay, this Young Chris cat really sounds a lot like Jigga, to the point he sounds like he’s just trying to be Jigga. It’s damn annoying at this point. I like how Beans get this one in and delivers some of his darkest wordplay on the album. Once again, the hook is lackluster and helps bring the song down from what it could have been.

11. You Over Did It
Featuring Young Chris & Murda Mill
We get yet another Biggie reference on this track to get it started. The cadence and flow sounds very familiar to B.I.G. at times, that’s kind of odd for me. Young Chris…well, you’ve read what I think of him. Let me be clear, he’s nice with it, unfortunately, so is the person who famously has that same sound and flow. I may be wrong, but I feel like Murda Mill just spit a freestyle flow and they added the beat later. He leaves the beat at times and seems to keep up his own tempo here. It’s not a bad flow, but it does sound very street battle made and not constructed around a song for an album.

12. The Ghetto
Shout out to Vincent Price with the spooky lead in voice over. The song is ominous and I think Beans is at his best on this song. “This fuckin’ recession got everybody stuck broke/This shit depressin’/Everybody cut throat/If you ain’t spendin’ 45 hard on a whole joint/You’re forced to buy 9 hard compressed from a small point”. The picture he paints with his words is powerful and welcome. Then you get to the hook… (Check out the music video here)

Bottom Line:
I’ve read a lot of reviews and promo articles that seem to hint, along with the intro of this album, that paints this album as a collection of unreleased material. That’s unfortunate because I like Beans and his flow, but if true, this explains why this comes off with a mixtape feel and not being cohesive as an album. This one is for the streets, no doubt about that, but as an album? I’m not sold. I think that a lot of these songs were Beans just going at a track or reciting rhymes from battles that may have been influenced a bit by the late B.I.G. and them adding the hooks later. Matter of fact, that’s my one of the biggest problem with this album. The hooks are, by large, terrible. That is a major part of a song, the ability to construct a solid hook is part of what separates battle rappers from successful artists. We can damn near make a who’s who list of battle rappers that didn’t make it in the business. This album being proceeded by The Solution really doesn’t help this one at all either. The previous albums all were released on Roc/Def Jam and this one is done by Siccness. The production value is low and as an album, this offering is less than average.