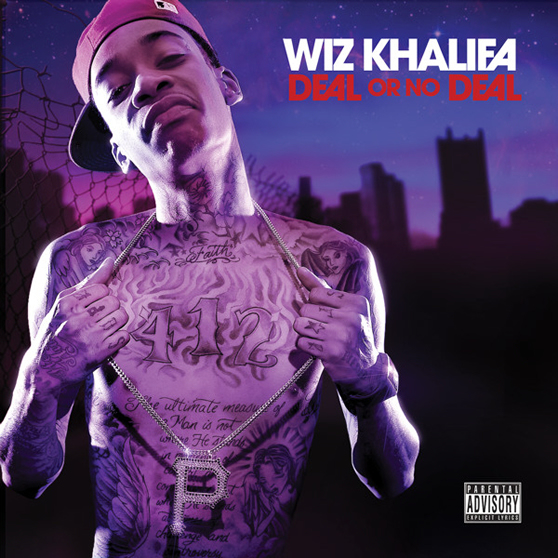 As 2009 wraps up, we here at nappyafro are tying up loose ends as far trying to get the music reviewed that we missed this year. Wiz Khalifa‘s Deal Or No Deal is one of those loose ends.

When we created the FFWD’s reviews, I honestly didn’t want it to mean just bad reviews and hopefully Deal Or No Deal breaks that notion.

I just recently started given Young Khalifa an honest listen and I’ve went from thinking he was the weak link on How Fly (With Curren$y) to thinking he was one to watch (“When U Find” off Burn After Rolling).

If you have regularly listened to Wiz, you should already expect that Deal Or No Deal is full of women, weed, & success. And even though Wiz is an “underground” artist, it seems crafting club ready tracks is no problem. I previously wrote about “Red Carpet (Like A Movie)” (Which I think has a chance to be a big hit), but other songs like the witty “Studio Lovin’”(“I keep this song on replay/Putting all them scratches on my back I’m like ‘Go DJ’”), and “Chewy” (Which I didn’t know meant getting head. What’s up with that Chew?) shows that he can make appealing tracks.

It’s not strictly all about the ladies though, tracks like the lead single “This Plane” still deals with his usual subject matters, but shows Wiz in his lane. Arguably the best song off the album is “Take Away”. From the laidback epic beat to the breezy chorus, this songs is Khalifa at his best (”I’ll have it where you bitch at phoning home/We done blown a whole o getting our stoner on”).

Not to say there aren’t drawbacks and slip ups on Deal Or No Deal. The Auto-Tune and Techno heavy “Lose Control” has Khalifa crooning to bad results. A bad hook is also present on the busy “Superstar”. And if one was to be picky, they probably could have made a better choice than “Friendly” if they were going to use a song off How Fly.

I think one main problem with Deal Or No Deal is that a lotta songs as well as the subject matter are too similar. While it’s appreciated that Wiz sticks to his guns, around the halfway point, some listeners may start to look for something else.

Bottom Line:
I don’t think Deal Or No Deal is Wiz Khalifa’s best work but it may be a starter to get people interested in other music from this Pittsburg native. Seeing that Wiz is independent and still charted this album on the Billboards, this may be the small beginning to a growing movement. The next album may be the full assault to one day having the whole world say “Taylor Gang bitch!”.