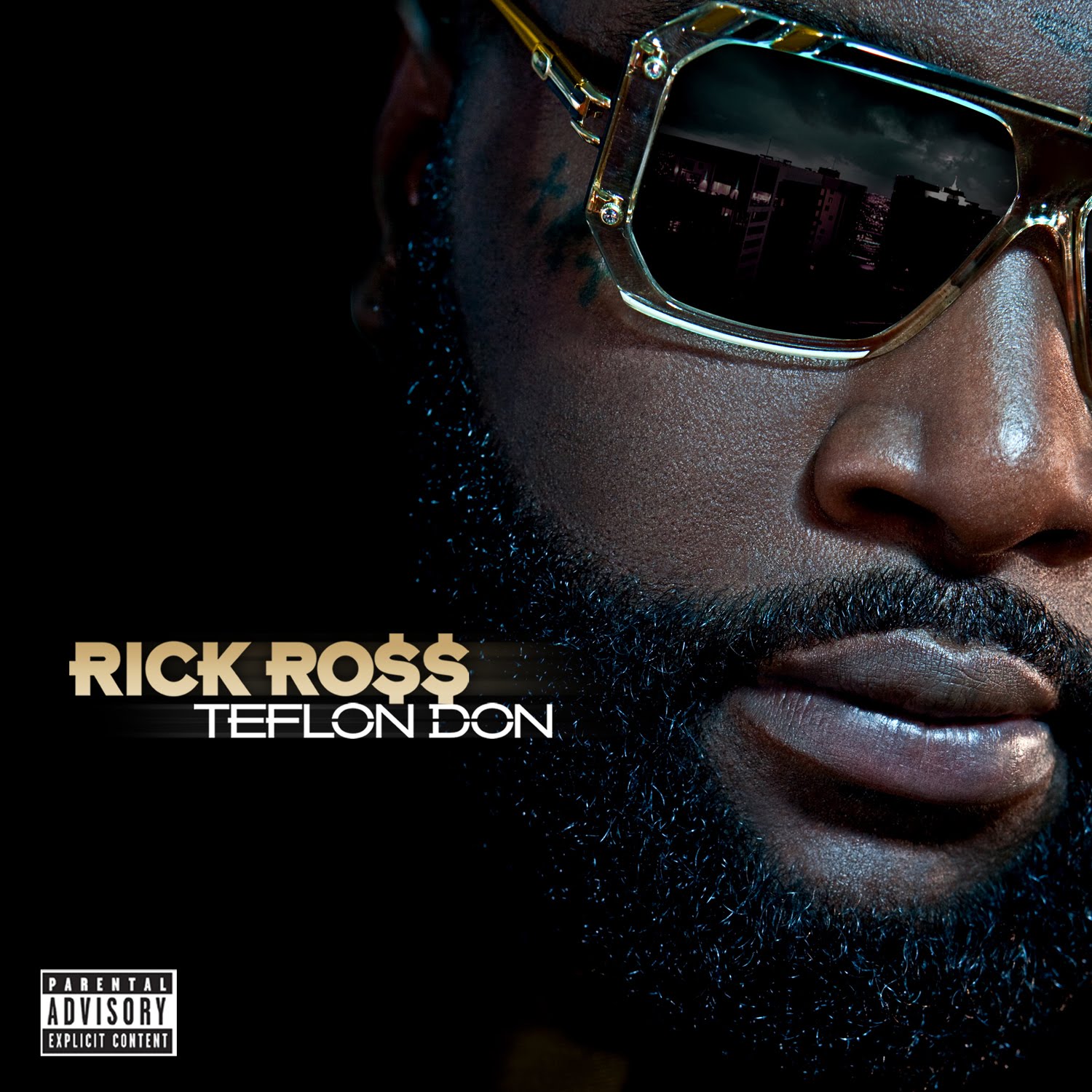 It doesn’t matter where you stand with Rick Ross, he makes enjoyable music. Weather you dismiss him because of his past, dislike him because of his lack of depth, or marvel at his fantastic world of lush and seemingly endless extravagance, you still nod ya head and turn his music up when you hear it. I have noticed that the music he’s kicked out on his own imprint is a lot more musically plush than before and he’s shortened each offering since his debut from 19 tracks, to 16*, then down to 15* . The one thing we can probably take to the bank is that Rick Ross will be talking about money…lots and lots of money and a lifestyle that defies the recession.

1. I’m Not A Star
Produced by J.U.S.T.I.C.E. League
This track and flow sounds like a throwback to when Ross first got on the national scene on Port Of Miami. The J.U.S.T.I.C.E. League gives us an uptempo track that features Rick spitting at a more incessant pace than he has in recent memory. The title of the song is misleading or facetious at best, as the entire song is an exhibition of garishness that is, apparently, Rick Ross’ everyday life.

2.Free Mason
Featuring Jay-Z & John Legend; Produced by Inkredibles
Man, let me just say damn. I love every aspect of this song. From the John Legend vocals that are just the right tone to blend with the magnificent musical direction of the track, to the lyrical exhibition of Rawse and Hov. These two always tend to have great synergy, but this time they’ve outdone themselves. Unfortunately for Mr. Teflon Don, he shared this song with Jay spitting one of his best verses ever:

Niggas couldn’t do nothing with me, they put the devil on me
I’da preferred niggas squeeze the metal on me
Rumors of Lucifer I don’t know who to trust
The whole word want’s my demise, turn the music up
Hear me clearly, if y’all niggas fear me
Just say y’all fear me
Fuck all these fairy tails
Go to hell, this is God engineering
This is a hail mary pass, y’all interfering
He without sin shall cast the first stone
So y’all look in the mirror, double check y’all appearance
Bitch, I said I was amazin’
Not that I’m a Mason
It’s amazing that I made it through the maze that I was in
Lord forgive me, I never woulda made it without sin
Holy water, my face in the basin
Diamonds in my rosary shows He forgave him
Bitch, I’m red hot
I’m on my 3rd 6 but a devil I’m not

3. Tears Of Joy
Featuring Cee-Lo; Produced by No I.D.
The introduction of this song is a speech by Bobby Seale that doesn’t seem to blend well with the song at all. The speech calls for rebellion and defines power on to a revolutionary stand point, and this song is about…man, I have no clue what the hell Rawse talking about. He goes from speaking about how he’s unimpressed by himself and what he’s accomplished, to being overwhelmed and fearless at the same time, then onto proclaiming that he’s a threat to cats in the game. I imagine that this song is about the duality of man. The constant struggle between being righteous and living in this world and being prosperous as defined by material possessions, respect, and basic vanity. Definition of the song aside, the musical quality of this track is fantastic. The wailing guitars and soulful tempo of the track lend themselves perfectly to Cee-Lo’s pain-filled vocals.

4. Maybach Music III
Featuring T.I., Jadakiss, & Erykah Badu; Produced by J.U.S.T.I.C.E. League
I must confess that I look forward to each original version of this ongoing collection from Ross. Previous versions saw him work with Kanye, T-Pain, Lil’ Wayne on II, and Jay-Z on the first episode. This collaboration isn’t as engrossing as the other two were, however, the track is again, fantastic. T.I. and Badu stand out on this one while Jada sounds terribly out of place and uninspired…his lyric that lead to “Cold Stone….Ice Cream” damn near killed the entire song.

5. Live Fast, Die Young
Featuring Kanye West; Produced by Kanye West & No I.D.
I think this may have been a throwaway track from Kanye’s upcoming album. I say throwaway in the sense that this song sounds handcrafted for Yeezie and not Ross. That’s not a good or bad thing, just an observation on the musical sensibility of the track. That also goes to say, that Kanye sounds a lot more at home with flow reminiscent of The College Drop Out,

My outfit’s so disrespectful
You can go ahead and sneeze cause my presence bless you
I mean, we walked in this bitch so stylish
Niggas done mistook me for my stylist
And I know it’s superficial and you say it’s just clothes
But we shoppin’ in this muthafucka and they just closed
So go ahead and just pose
When she walked up out the dressing room the store just froze
And I know, they tryna’ get they cool back
And the ghetto bitches hollarin out “You doooo thaaaat
Uh, so they can never say we never lived it
And if I see Biggie tonight, I loved every minute!

I think aside from the grand larceny of his record by Kanye, the length of the song itself was the next most surprising clocking in at 6:13.

6. Super High
Featuring Ne-Yo; Produced by Clark Kent & The Remedy
This lead single and video from the album that helped tattoo the image of Stacey Dash dancing on a motorcycle to this tune. When I heard this song, I had an entirely different idea of what the album would sound like.

7. No.1
Featuring Trey Songz & Diddy; Produced by Danja
Diddy’s fascination with the bottles clanking sound makes this track as well giving it that familiar dance injection that seems to be the hallmark of his songs. Ross sounds okay on it, but overall, it’s just an odd song and even more odd on the album. I think the star power kept this one the album and wouldn’t be shocked to see this become the next single…I hope not, but I wouldn’t be shocked. With Trey seemingly the face of R&B lately and Diddy’s album on the horizon, I don’t know how they can deny this one.

8. MC Hammer
Featuring Gucci Mane; Produced by Lex Luger
The track, eh…it’s okay. It’s not a bad track, just sounds typical. The more I listen to this song, the most “creative” thing about it is the reference to MC Hammer with the meaning (I believe) to be his affinity for spending cash somewhat recklessly. Lyrically, I’m not sure if it’s because of Gucci’s inclusion or just happenstance, this is the worst song on the album…although, Diddy’s verse in the previous song is damn near won that honor by itself.

9. B.M.F. (Blowing Money Fast)
Featuring Styles P; Produced by Lex Luger
Without realizing this song was made by the same producer as the last song, I was like “damn, this sounds like MC Hammer part 2.” It very well could be, in all aspects since it’s just as mediocre as the previous song.

10. Aston Martin Music
Featuring Drake & Chrisette Michele; Produced by J.U.S.T.I.C.E. League
This is the music I expected to hear a lot more of based on the single, and frankly, he sounds much better being the thugged out Teddy P of Hip-Hop rather than the Rick Ross of old. The Drake’d up bridge sounds good, but I don’t know why he didn’t rap on this one. Ross does a great job and like I said, he really sounds at home on this kind of R&B influenced track.

11. All The Money In The World
Featuring Raphael Saadiq; Produced by The Olympicks
Ok, folks cried about Marshall Mathers singing on his latest effort…clearly, you haven’t heard Rick Ross sing yet. WTF. Now, I gotta give dude props because this songs kind of levels off the entire album. It balances out the egotistical verses of the previous songs with this “I don’t take myself too seriously” vibe that comes with him singing, he even takes a shot at himself singing in the song. This fits in with the overall enjoyable vibe to the album.

12. Audio Meth
Featuring Raekwon: Produced by The Runners
This song could have, should have easily replaced one of the weaker tracks on the album such as “MC Hammer”, or “B.M.F. (Blowin’ Money Fast)” . I still haven’t figured out how I feel about the sample used here, but the song isn’t bad at all. Again, as with the Drake track, I would have liked to hear an actual verse by Raekwon on this song where he’s featured basically as part of the track.

BOTTOM LINE:
This album is one of those albums that you have to appreciate for what it is first, then you can evaluate it. Rick Ross isn’t, never has been, and probably will never be, a lyrical heavyweight. He makes feel good music to ride to and just simply enjoy. While he has evolved in his music selection greatly, his lyrical content is what it always has been. With a deceptively long 11 (or 12) track album with brief missteps, this album is definitely worth the purchase. Ignore the score here, don’t let a rating influence this choice for you, you need to enjoy this album. After enduring an attack from one of the most feared career finishers in the game (50 Cent), seemingly increasing comparisons to one of the greatest to ever do it (Biggie), and a history that would have ended most rappers claim to the lifestyle he touts on his albums, Rick Ross drops an album that is flat out enjoyable and helps cement his claim to being the Teflon Don.