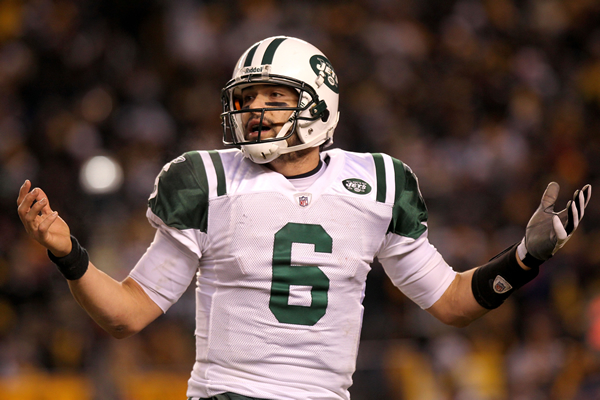 For some reason the other team in the city that didn’t win the Super Bowl has been in the news cycle on a year round basis. Whether it be the owner telling the world that he wants to be on HBO’s Hard Knocks or Jesus himself coming to New York. Usually more often than not the Jets are in the cycle for an attention grabber but when the season starts it will be on Mark Sanchez.

I still remember when Eric Magini had a cameo on the Sopranos being praised as the Mangenius a few years back. Even though he was fired, remnants of his regime linger with that team. Mark Sanchez owes him thanks for what he did to that team. Upon his arrival to New York, Sanchez was placed around a strong veteran team that had just missed the playoffs with a quarterback past his glory days. In comes Rex Ryan with his bravado guaranteeing championships like LeBron and he could have won them when he had that chance. With any NFL roster there is turnover, players coming and going every year that will happen especially with modern free agency. However Rex and GM Mike Tannenbaum made a crucial mistake. Whenever, you replace anything you should either stay the same or get better becoming worse showed the cracks in Sanchez’s game. Rex Ryan and the GM haven’t really been helping these past years with the play around him. Out goes Pro Bowl lineman Alan Faneca and Damien Woody in come Matt Slausen and Wayne Hunter, the same with Thomas Jones for LaDanian Tomlinson and Braylon Edwards for Plaxico Burress. Each person who was gone from the team meant a new piece thrown in for a young quarterback still maturing without getting any consistency.

With these new pieces there was more responsibility given to Sanchez who I believe is at best a game manager, his closest comparison being Kyle Orton. At best when given limited responsibilities and when given a job that job is limited to a great point. When things break down around them their weaknesses are magnified and exposed. With insight to the team on Hard Knocks and seeing his body image give off negative vibes to his teammates the addition of Tim Tebow doesn’t help his confidence. Some people who point to his contract extension as a vote of confidence but taking another look at it there is no new money he is receiving the same salary from before all it did was free up money to resign a nose tackle. I don’t know how much longer he will last in New York but by how they are building the team it looks like things have to get worse for Sanchez before they get better. I had a coach who used to say “Everyday is different if you aren’t getting better you are getting worse”, and with the Jets things have to get a lot worse before it gets better.