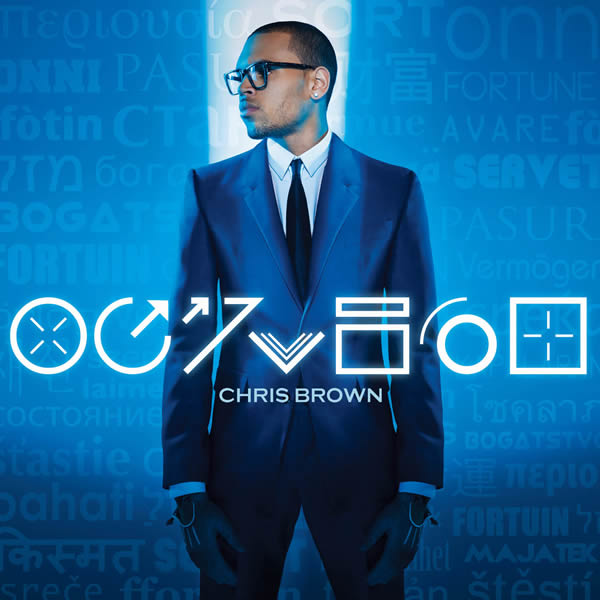 I think it’s pretty safe to say that the Chris Brown comeback tour is complete and we can focus on the music again. He’s two albums and five years removed from a  Platinum plaque and his last album went Gold. Everytime we see him his music smells like glowsticks and hair product and I wonder if he forgot the crowd that embraced him out the gate. Has he gone full dance dance revolution like that album I won’t mention (at least until the bottom line) or was F.A.M.E. a sign of things to come? One thing for sure, Chris Brown has the world watching, and Fortune may be a make or break project for him.

1. Turn Up the Music
Produced by Fuego & The Underdogs
We all know this song and if you’ve been a part of fronation for any time, you know I’m not a fan of that Euro #oontz ass music for the most part. I say the most part because there are exceptions like on Ye’s album…but this ain’t one of them. You’ve heard it, I’ve heard it, let’s move on.

2. Bassline
Produced by Pop Wansel & Dayvi Jae
For someone that doesn’t typically like sonic sounding music where other elements are lacking, the album is off to a slow start. I will give this one more of a pass than the previous song because while mostly sonic, the bassline is dope (as intended). There is enough interest in the track to keep me away from the skip button. Lyrically, this song is only about making girls dance (he has about 8 hot bars on this song though). This song would be epic in Body Tap or Strokers.

3. Till I Die
Featuring Big Sean & Wiz Khalifa; Produced by Danja
This is my favorite song on the album. I love the way Danja produced this track. It’s drastic departure from it’s uptempo predecessors on the album and would have really been a better way to start the album. Big Sean and Wiz both give one of my favorite efforts from either rapper. Sean isn’t ever really bad in my opinion but he really sounds at home here. I’ve typically been lukewarm on Wiz but his flow and mastery of breath control and working with the track shine here. All in all, this is a great marriage of feature and production resulting in a great and easy listen.

4. Mirage
Featuring Nas; Produced by H.Money & Chris Brown
This is a really interesting song. Hearing Chris Brown talk like the angry victim of a cheating girl who chose the other guy and expects him (Chris) to still be there for her. The song title being used to explain that the chick thinks she knows him and thinks he’s one thing when he’s someone totally different. Basically, this song is a heartbreak song for the tough niggas. Plenty of cursing and a hook that proclaims “What the fuck I look like” along with the Nas verse…this song sounds like some niggas scorned. That doesn’t take away from how audibly enjoyable this one is. It’s still a good song…but maybe I’m a nigga scorned at some point too.

5. Don’t Judge Me
Produced by The Messengers
I assume it’s this song (and the run after it)  that has folks declaring that this album is a return to R&B from his previous project. I can’t argue with them that this song especially is a good return to good R&B music of this decade. I like every aspect of this song. Even though it’s still on some Goldie-esque/Stevie J (read pimp shit) type sentiment, the song is still good. Check what I mean below.

7. Biggest Fan
Produced by The Runners & The Monarch
These last few songs are a nice run on this album. This is yet another song about sexing, but it’s crafted to work from the dance floor to the bedroom. The Runners and The Monarch were able to give you a track that resonates pretty well in both arenas and Chris’ writing team (which shockingly includes Jermaine Jackson for this song) keep it sexy without sacrificing the energy.

8. Sweet Love
Produced by Polow Da Don & Jason “JP” Perry
I’ll take my late pass here. I’d heard this song a few times and had no idea who it was nor that it was called Sweet Love. Until this review, I hadn’t even seen the video. It’s a decent song to me. There are parts of the track, musically, that I flat out HATE (that video game, phone power on/off sound is horrible) but there are also other elements that aren’t bad. There isn’t much to discuss lyrically, this song is about sexing and it’s not doing creatively…not suggesting it has to be either. It’s essentially a good song for the bedroom, if you can get past that 1up sound.

9. Strip
Featuring Kevin Mccall; Produced by Tha Bizness
The best part of this song is the hook. That’s where the track breaks completely different and the production seems to step up in quality. The rest sounds a bit dated like some left over music from his first album. In relation to the rest of this album, it seems to be a little out of place. Kevin and Brown collaborated quite well on “Dueces” but I don’t think this one has that same appeal.

10. Stuck On Stupid
Produced by Kennedy D. Jones
This is a shining moment on the album. It manages to effectively do what the previous song was trying to do, blend some of the nuances of previous eras and some of the new synth sounds that are prevalent in commercial music. I’m a bit curious why a song with such a vulnerable subject (being a fool for someone) has an uptempo and energetic personality, but it still works because of the production. Kennedy did a really good job of blending the keys and bassline with the emotional emphasis Chris put into the song. 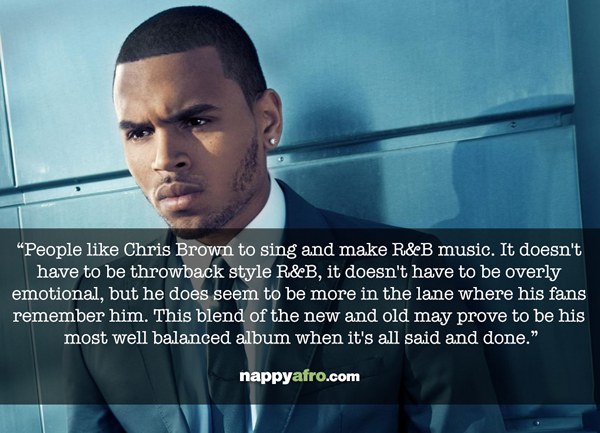 11. 4 Years Old
Produced by Polow Da Don & Hittz
Props should be given here for Chris addressing an area of great criticism, his maturity. Not only for that though, this song has a different musical feel to it. There is a folk music style acoustic structure to it that borders on country almost. Now, while I still haven’t decided how I feel about the musical direction I do commend him for what is written. Check the lyrics (where the real dopeness of this song lies):

I got money
Everything that I ever wanted
Never thought of what I might need
Need, need
Ain’t it funny
How I spend my whole life running
Reaching for the sky
I ain’t coming down
With nothing

12. Party Hard/Cadillac (Interlude)
Featuring Sevyn; Produced by Boi-1da & Kennedy
Dashing violins and some sensible enjoyable melodic tones make this one of the best songs on the album. 1da and Kennedy produce what may be the most interesting and intelligent musical moments on the album. The positioning of a song that features the classical sound of violins and the throwback feel of barbershop a capella music on “Cadillac” make you feel like you’re listening to something with a greater purpose. This is a great musical moment on the album without a doubt.

13, Don’t Wake Me Up
Produced by Benny & Alle Benassi, Free School, Orbit, & Kennedy
Back to the #oontz music and maybe I’ve been bitten this song and it’s saturation because I don’t mind this one as much anymore. Now, I won’t go out of my way to play it, but I won’t skip it when it comes on the album every time. Being completely honest, I don’t think it’s a bad song like others in this type of sound, it’s just not my thing and while the drums almost make me ignore the sonic waves crashing all around, I’m fine with just admitting it’s not bad just not for me.

14. Trumpet Lights
Featuring Sabrina Antionette; Produced by Polow Da Don & Jerome “” Roc” Harmon
It’s well documented where I’m from by now, and when The Percolator came on, I remember being in this youngin’s club called The Palace. The music hit, folks started clapping at the same pace, and I thought I had stumbled into a cult. I was freaked the hell out…that was until all the chicks started hitting the splits and “percolating” (and naw, this ain’t how they did it in Da Lou). Anyway, I bring that song up because that’s what this song makes me think of. It has a similar tempo and “pop” sound. Very similarly, I want to see the crowd when this song comes on. This is one dance song I approve of, shout out to Chicago.

Bottom Line:
Where F.A.M.E. was a great return from the pretty terrible Graffiti album as well as a return from some really bad choices, Fortune may prove to be that sweet spot between the new and the old. While the vast majority of the game likes to see Chris dance, they don’t necessarily want an album full of it, as proven by the previous two albums. I’m sure the total numbers were skewed a bit by his legal issues, but there is a reason that the album had 8 singles out of a total of 13 songs and still didn’t go platinum. Folks like Chris to sing and make R&B music. I do agree that there is a commercial feel to the majority of the songs and maybe not much substance, but radio IS what made Chris Brown the star that he is and if you want deep ballads and meaningful soulful music, you’re playing the wrong artist anyway.  It doesn’t have to be throwback style R&B, it doesn’t have to be overly emotional, but he does seem to be more in the lane where his fans remember him. This blend of the new and old may prove to be his most well balanced album when it’s all said and done. (I think the album would be a solid 4 if he replaced some of the #oontz music with some of the deluxe bonus tracks)