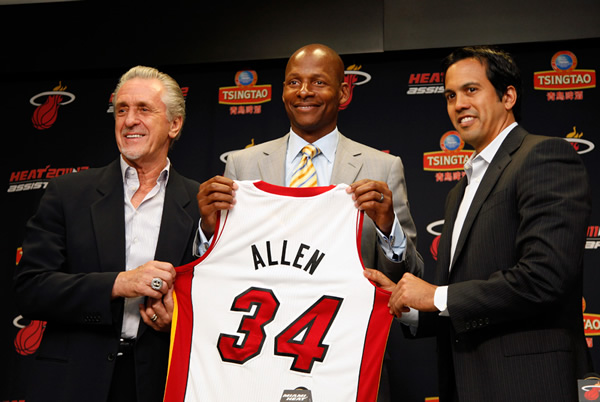 Even though the Heat won the championship last year, most sport advocates would agree that the East is still the overall JV league of the NBA. Well even with that said, I’m giving people a report card to help see what teams improved and got worse during the offseason.

Boston Celtics: They ended last season just one quarter away from the NBA finals. What does a team so close need? Nothing major! This team is a little older so all they really needed was to bring everyone back and add some young legs here and there. Mission failed! Not only does letting Ray Allen go hurt you but it also helps the team who eliminated you last year. Still the Celtics had the wits about them to add Jason Terry and Courtney Lee. This will help them move on, but Ray Allen leaving is a punch in the gut. Grade: B-

Brooklyn Nets: This team was horrible last year, and going into this offseason there were a lot of questions about this team and its future. Deron Williams was the most coveted free agent available, Gerald Wallace was a free agent, and Brook Lopez and Kris Humphries were on the market as well (4 of their starting 5). What they do? Resigned them all to huge contracts (Gerald Wallace was the cheapest at 10 million a year) and traded to obtain the league’s most overpaid player in Joe Johnson. This team has become one of the Eastern Conference’s most dangerous teams overnight. Grade: A

New York Knicks: I have almost completely turned around my opinion about the Knicks. Last year I thought they were underachieving. Then, Amare got into a fight with a fire extinguisher and lost, and now I think this team needs to be blown up. Amare specifically needs to be dealt away! Is that going to happen? No! with his injury past and his huge contract, New York is stuck with him. They did make some nice moves in the offseason though. Picking up Marcus Camby, and Raymond Felton help immediately. Jason Kidd, Ronnie Brewer, and Kurt Thomas don’t do much to help this team though. Letting go of Jeremy Linn was actually a smart thing to do. He only played 27 games last year and expected 25 million, they would’ve been stupid to do that. Grade: B- (I’m torn on this one)

Philadelphia 76ers: At the beginning of the offseason I thought they were crazy. They allowed Lou Williams (their best scorer) to walk without trying to put up any fight, and then amnestied Elton Brand (their only post presence offensively). OMG WTF? That’s what was going through my head, but then IT happened. After more than a year of talk, Dwight Howard finally got his wish (sort of) and was traded to the Lakers. Somehow Philly snuck in this trade and got the second best player in the transaction, while only giving up a player they have been trying to get rid of anyway in Andre Iguodala. Andrew Bynum will be the best Center in the league and the star Philly has needed since the real AI left town. Grade: B+

Toronto Raptors: Did nothing!!! And they will continue to suck! Grade: F

Chicago Bulls: The Bulls ended the season in a place of uncertainty. With their star Point Guard, Derrick Rose, set for a long Rehab; they had two real options. They could have held steady and tried to make the playoffs, or they could blow it up and reshape the roster so that when he does come back they are even more deadly. They got worse, but not enough. They let most of their major bench players go, either through free agency or trades. They will be a good team next year, but not an elite team. They won’t be a team that misses the playoffs, but they won’t get out of the first round. Being a middle of the pack team in the NBA is the worst place to find yourself, especially when you aren’t a relatively young club. The Bulls should have either improved the roster or imploded it. No go on both accounts. Grade: D

Cleveland Cavaliers: Had tons of cap room, but made no real moves? Kyrie Irving has been the only good thing to happen to the Cavs since LeBron took a huge shit on the hearts of Cav fans. They could have really improved this rosters talent, but were smart not too. I’m hoping they plan on letting Irving develop with this terrible cast of players for one more year, and remake the roster before they have to pay him the big bucks. Sometimes patience is the best virtue, but will it pay off? Grade: B- (they didn’t rush out and overpay players just because they could have)

Detroit Pistons: Remember when this team was great? Chauncey Billups, Rip Hamilton, Tayshawn Prince, Rasheed Wallace, Ben Wallace and an unbelievable bench. Those days are long gone. That great team was great defensively and solid on offense. This team sucks at it all. I honestly don’t know who their best player is? Sad really! To add more dirt on top of it, they only added Corey Maggette (a washed up wing player who has never won anything). Sorry Detroit fans! Grade: D-

Indiana Pacers: This team showed that they were better than I thought last year. To me this was the second best team in the Eastern Conference last year. I know Boston was the runner up for the Eastern Conference title, but this team played better. They have size in the interior, and almost more skill on the perimeter than any other team in the East (except Miami). The only real issue they had is that Darren Collison didn’t fit as well as they wanted, so they got rid of him. This team will cause some issues this year. Grade: B+

Milwaukee Bucks: Last year they added Monta Ellis and Ekpe Udoh, but it really didn’t help them in anyway. Monta Ellis is bound to clash with Brandon Jennings, because they are exactly the same player. Monta Ellis will be a free agent at the end of this coming up offseason, and he has no real reason to want to stay on this team. They did nothing to improve this offseason. Grade: D

Atlanta Hawks: This team made some brilliant moves this offseason. They had previously overpaid Joe Johnson, and were smart enough to ship him to a team desperate for a star in Brooklyn. They turned around and got Devin Harris (for nothing) and added Lou Williams to help round out their backcourt. This team will once again compete in the East, but will have more flexibility for the future now. Grade: A-

Charlotte Bobcats: We all love MJ, but right now, if I could, I would slap the shit out of that man for what he has done as an executive for the Bobcats. This team isn’t going to be good for the fore seeable future! I can’t think of anything positive to say about this team. Grade D- (I can’t give MJ an F)

Miami Heat: Everyone’s favorite villain. Miami shocked the world (not really) by winning the NBA championship. How do you improve on that? By taking one of your strongest competitors impact players. That is what Miami just did. That is what Miami just did! Taking Ray Allen from the Celtics would have been enough, but then to add Rashard Lewis too, it just seems unfair. People may not remember but it wasn’t too long ago when Rashard Lewis and Ray Allen were in Seattle together and playing at All Star levels. Miami will have these too coming off the bench with Norris Cole, Mike Miller, and Udonis Haslem. If they ever get a center who can play this team would be unstoppable. Grade: A

Orlando Magic: Well well well….. This is pretty sad. This team has had more than a year to trade Dwight Howard, and what do they get for him? A Happy Meal with cold fries. Yes, Aaron Afflalo and Al Harrington are good players, but come on! This is far from the best package you could have received. Someone needs to lose their job, damn I forgot that’s already happened twice. Grade: F- (It’s not every day you have the best center in the league and to trade him for nothing is terrible)

Washington Wizards: This team is on the rise, but still has some time to develop. John Wall is becoming a stud, and giving him players like Emeka Okafor, and Nene are only going to help his game. They still need help on the wings, but in the mean time Martell Webster should be able to add some spacing to the floor. In a couple of years, with the right moves, Washington can be right back in the thick of the Eastern Conference Playoffs.