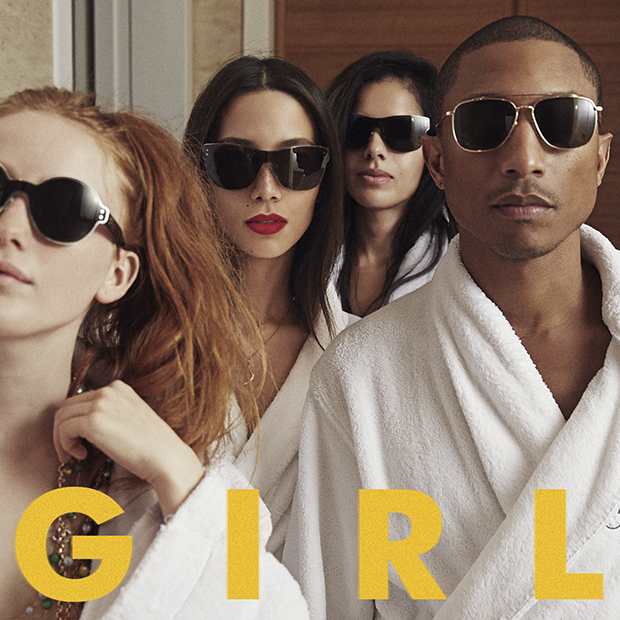 If you’re constantly plugged into social media there’s no way you could’ve missed the memes of Pharrell’s picture put next to a Native American gentleman; claiming that the N.E.R.D front man has been with us longer than any mortal since Methuselah (if you’re into that thing). But bored n.e.r.ds generating funny pics aren’t the only ones considering this line of thinking. One media outlet asked Pharrell in an interview if his inability to age was because he was a vampire.

Whether Pharrell Williams is truly a horrifying monster that could kill us all at any moment or just a guy who can afford to do the necessary things it takes to look young and stay healthy is something that cannot be answered definitively in this review. What is definite is that Pharrell has been one of the top choices to go to if you want a hit record for nearly two decades. His production skills as part of the Neptunes and by himself as well put him in a space all alone, with few very worthy to be even mentioned in the same breathe. Yet, when he decides to actually step behind the mic instead of the sound board for his own albums it usually comes across more idiot than savant.

That’s not to say that Pharrell is a terrible solo artist by any means; yet he comes across more like a guy just wanting to scratch an itch than an exceptional artist who’s honing their craft to perfection.

Pharrell’s sophomore solo album G I R L comes to us almost 8 years after his debut Seeing Sounds. Does the Star Trek hit machine have what it takes to make us reconsider who’s on our top 5 list? Or will we just be left waiting to hear the next mega hit he cranks out for someone else? Read on and find out.

Sidenote: All songs on G I R L are produced by Pharrell Williams

1. Marilyn Monroe
The album starts out with a beautiful string arrangement before Pharrell brings in some synths and an up tempo drum pattern. It’s standard pop stuff here, and this is what you should expect for most of the album. That’s not necessarily a bad thing though, as the track sounds like something you’d hear at a really exclusive A-list club. Pharrell stated that this album was supposed to be a rebuttal to the backlash he received last summer for the perceived sexism and misogyny of Robin Thicke’s monster hit “Blurred Lines”. I guess you can call this an upgrade; Pharrell references some iconic and powerful women in the hook (Cleopatra, Joan of Arc, Marilyn Monroe) and says he wants a ‘different’ girl, which you can take to mean he’s tired of the ‘bad bitches’ with no substance. While this won’t be the new feminist mantra of 2014, I wouldn’t mind hearing it at a nice bar as I order overpriced vodka and orange juice.

2. Brand New
Featuring Justin Timberlake
More pop as Williams brings on white chocolate wonder kid Justin Timberlake for the assist. This sounds like the stuff that Michael Jackson was trying to do in the early 2000’s. Upbeat and frenetic, yet unmistakably infectious. It’s almost comical how much more work the music has to do to hook you in here, because the lyrics are downright corny. I know I’m just the lowly reviewer here and Pharrell is the bajillionaire with way more music credentials, but I’ve written 7th grade love notes with more depth than the words here. Pharrell and JT sound sophomoric as they talk about how love has made them feel brand new. But again, it’s the great music, and Timberlake’s MJ inspired falsetto that keep this song afloat.

Yeaaaa, so much for suggestive. Pharrell goes straight for the gusto. Hearing “make the pussy gush” repeatedly is a little jarring to say the least, especially after the campy sound of “Hunter”. Yet, after you get done collecting yourself there is some good stuff going on here. For starters, it’s the first R&B inspired song on the album. Second, even though Pharrell is much more explicit with his desires, they don’t come off as sexist or misogynistic. Remember fellas, its okay for good, moral, upstanding women to like sex, it doesn’t make them prostitutes. And you don’t have to call them whores, sluts or bitches when you make songs like this, which Pharrell smartly avoids. While his crooning gets a little clunky at times, it’s still a cool song.

5. Happy
Halfway in is where we get the lead single for the album. If you have kids or aren’t too old to appreciate animated movies you’ll recognize this from the Despicable Me 2 movie which came out last summer. Pharrell is doing a really commendable Curtis Mayfield impression as he fuses neo-soul and funk into one happy song. Again, Pharrell won’t be categorized as some great social theorist; yet, while his words aren’t deep they are positive and uplifting enough to ring true. It’s really hard to wear a frown when this song comes on, and it’s a great song to accompany a really good day or to help change a really bad one. 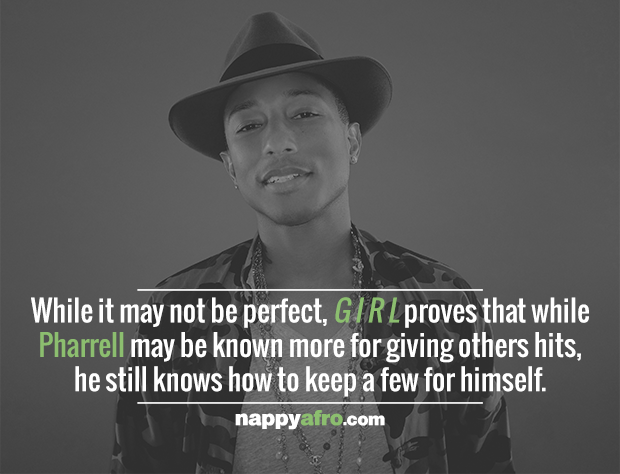 6. Come Get It Bae
Featuring Miley Cyrus
I have to admit I was apprehensive when I pressed play on this song. Not so much because of Miley but because ‘bae’ is one of the worst words ever added to the English lexicon. The fact that it’s a part of the chorus makes it hard for me to fully buy into this track, which is unfortunate, because it’s actually pretty dope. The guitar riff is pretty cool, and Miley isn’t left to her own devices as she and Williams sing over half of the song in unison. Pharrell sounds at his player best with lines like, “None of them boys know the first thing about your fantasy/and if they tried, they can not do it just like me”. If only I didn’t have to hear the word ‘bae’ so damn much. Smh.

7. Gust of Wind
Featuring Daft Punk
We get some futuristic neo-soul/pop as Pharrell brings on the legendary Daft Punk. The track sounds REALLY great, I would say excellent but because of the absurd expectations I have for the parties involved on this song I can’t quite justify it. Maybe because you don’t get the signature drum patterns that Daft Punk are famous for. Nevertheless. That’s really just nitpicking. Pharrell is full-fledged singing here, which is good because he doesn’t sound as clunky when he tries to go sing-songy or croon. Again he’s talking about the wonderful feeling of being in love, and while it’s been touched on heavily throughout the album, it’s not bad. I do wish he would flesh out the meaning of love a little more. In Pharrell’s world, love seems like a very shallow, gleeful feeling. Then again, love means different things for different people, so if you can relate then that’s fine. I will say personally I think this song would be more at home playing at a Thom Browne fashion show than it would be on your ‘Knocking Boots’ playlist.

8. Lost Queen/Freq
You get a two-for-one here as Pharrell fits two songs into one track. We start with “Lost Queen”, which sounds hypnotic with its Afrocentric sounding drums and chants. Pharrell’s soothing vocals sound coy and soothing as he tries to seduce his jaded interest, who he calls an alien. This wouldn’t be a bad song to set the mood with. After “Lost Queen” we get a watery interlude and then go into “Freq”, which continues the alien them and the beat gets even smoother, which is saying something. This may be the best example of a traditional love song, or the kind of song that you would get some too. This is my favorite track on the album.

9. Know Who You Are
Featuring Alicia Keys
The latter half of this albums is keeping with the more standard R&B sound. We even get an appearance from Alicia Keys, which may not be a good thing as everyone seems to hate her and think she’s washed up nowadays. That aside, Keys actually holds up her part of the song, it’s Skateboard P who brings it down. Pharrell does not have a traditional singing voice. He sings in falsetto. While he can do some standard runs, he lacks real range, so he struggles at times with the high notes and trying to add bravado (power). He sounds really off key as he tries to relate to the different things women have to put up. A good message and Grammy winning partner can’t save this one. Skip it.

10. It Girl
Pharrell closes things out still trying to get the most out of his vocals. This is standard Pharrell here, flirting and using his charm to woo and seduce. The beat is light and sounds like vintage Neptunes fair. Guitar riffs, light percussion, claps, and a few other elements. Not really definitive, but it blends well with the rest of the album. The disc doesn’t go out with a bang, but it doesn’t end with a dud either.

Bottom Line:
Pharrell is 40 years old and will be 41 in April. It’s amazing that he has been able to not only remain relevant but be cutting edge and innovative. It’s crazy that with all of his creativity and talent that he was able to stay away from recording his own music for nearly 8 years.

However, controversy always makes for a fertile breeding ground for compelling music. If the fallout from “Blurred Lines” really upset Pharrell enough to make a full concept response, that’s pretty remarkable precedent. To be clear, this is not a ‘feminist’ record. While I am no authority on the subject, I do know enough that the topic is too deep to be fully defined or properly advocated for on a 47 minute pop album. Nevertheless, Pharrell created a sexy, fun album that managed to be pretty non-offensive.

Nevertheless, while that’s all well and good, does that mean that this was a good album? Yes and no. While Pharell’s production skills are miles ahead of 98% of everyone else in the game, he’s still a mediocre singer and songwriter. The great thing is that the music makes for more than an impressive crutch for Pharrell to lean on. The best way to describe this album is that it’s perfect ambiance music. It would make a perfect backdrop for a celebrity filled after-party, or for a hipster wine and cheese get together. It’s definitely meant to be enjoyed more so in a group than alone.

While it may not be perfect, G I R L proves that while Pharrell may be known more for giving others hits, he still knows how to keep a few for himself.