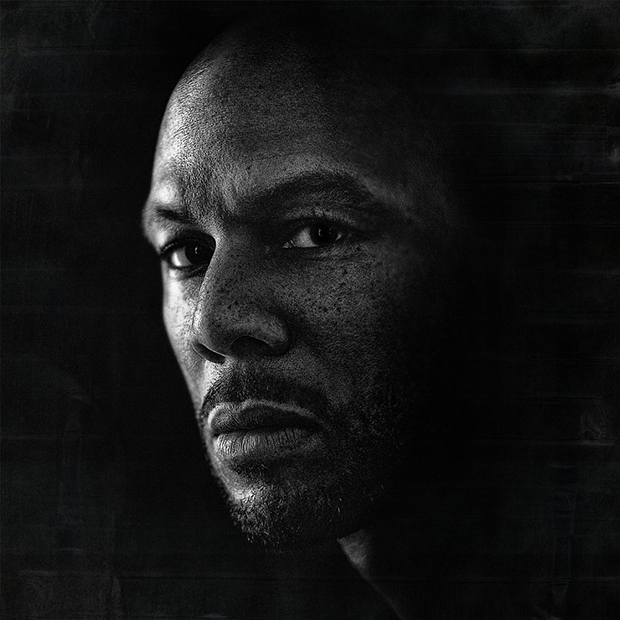 I love Common, but how many Common albums have I really fully digested? Two. I know it’s not a lot, but let’s keep it real. Common has a bad reputation of either being too dull, or attempting to recreate the wheel, and quite frankly he’s never been good at the latter. Well after listening to an interview where Common said that No I.D. produced every track for his album and he was going back to really RAP, I got excited.

Common hasn’t really done anything great since the last time he and Ye were in the studio, and although Ye is not on this album, No I.D.’s presence leads me to believe that this album can be great. Hopefully Nobody’s Smiling can lead me to crack one.

Note: All tracks were produced by No I.D.

1. The Neighborhood
Featuring Lil’ Herb & Cocaine 80s
Man! What a way to start an album. You know that No I.D. is a beast, but we don’t always know what Common we are going to get anymore. Well he comes out the gate swinging on this hard core street banger with a subtle jazz melodic influence.

Have you ever heard of Black Stone around Black Stones?
And Four Corner Hustlers, Vice Lords, Stony Island on Aces
The concrete matrix, street organizations
They gave violations, hood public relations
It was the basics to get big faces
Stay away from cases, bad broads, good graces
The hustles was the tastemakers and trendsetters

The second verse is by Lil’ Herb, and although it’s good, I would have rather had another Common verse. Cocaine 80s is on the hook. (or it could be vice versa, I don’t know either of these cats).

2. No Fear
Hard hitting Drums from No I.D. with Common telling stories about a street legend. This isn’t anything new that Common presents here, but it’s still dope, and not many people can do it better than Common. The second verse is where I really connect though, Common starts it off by kicking knowledge to his daughter, then flips it and starts talking about himself and his position in the game.

3. Diamonds
Featuring Big Sean
Is it bad that every time I see a song with a Big Sean feature listed, I get nervous. I mean, he can out rap most people’s favorite rapper, but dayumn!!! Almost every feature he does now sounds tailor made for radio play. Well, if you thought this was going to be the same, you are right! Kind of. The hook is absolutely made for the airwaves, but the rhymes that Common was spitting during his verses were legit. Not sure how I feel about this one yet. Even if I end up liking it, it doesn’t really fit here to me.

4. Blak Majik
Featuring Jhene Aiko
This is the song I may have been most hyped about. Jhene always seems to take her collaborators to another place artistically. The instrumentation surprised me, I was expecting something more R&B aimed, but it sounds like something you would hear on a 2001 Missy Elliot album. There are some weird parts of this song, like Jhene was singing (?) and it was reversed. Really weird!!!!! Another uncertain project.

5. Speak My Piece
What is going on? This album started off with so much potential. I’m not feeling this at all. Not too much to say here honestly, it’s pretty bad. There is a Biggie line that they flipped here, but it’s done so poorly, I’m sure Biggie is rolling in his grave. Another odd beat.

6. Hustle Harder
Featuring Snoh Aalegra & Dreezy
Thank God. It sounds like we are getting back to the Hip-Hop. Hard hitting synths and Common is back to the rapping about these women that we lust after. This particular woman is said to “Hustle harder than a nigga”. I could see this as a single if presented the right way. I’m feeling this one. Whoever Dreezy is, she can be a star if she keeps developing her Nicki Minaj impersonation. 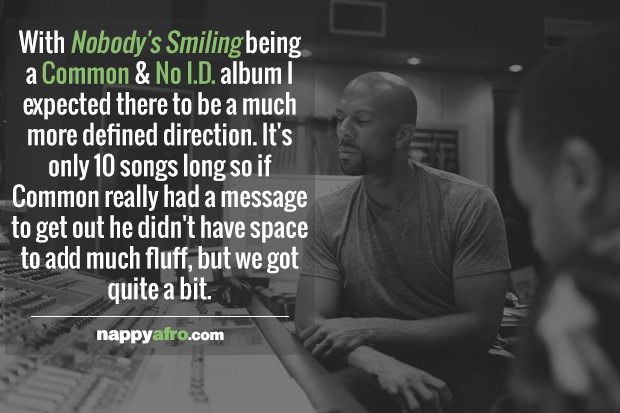 7. Nobody’s Smiling
This is my type of song. The best way to describe the instrumentation and the lyrics is dark. Common is on it here. The second verse….. WOW!!! I almost forgot he could do this.

In the Chi, ain’t a damn thing funny
Thinkin’ of ways to get money
Drive down Lake Shore, schemin how to make more
If we ain’t eatin together, what is this cake for?
Ain’t nobody givin it, that’s what we take for
Niggaz is broke, what I need a break for?
Glaciers of ice, lasers and lice
Let the chains glow heavy, we paid for ’em twice
Made for the life, ball out like we out of bounds
Bars and guns, niggaz got a lot of rounds

Then Malik Yusef dropped a poem that I’m really feeling too.

Face on T-shirts with no #hashtags
Just big-ass trash bags tagged hash
Out here, shit been trill
Fake-ass gangster, quick to take a fag’s cash
Five versus six, Star Wars
No stickers, real bullet holes in car doors
Out of ten people that was shot, 7 ate 9’s
Two trey 8’s, and one fo’-fives
Tryna get to two-threes, the numbers game
Then here come the fame, but they won’t say no names
Are these celebrities way too shy to be loyal to the town?
I take my publishing check and spread my royalties around
Popes, bishops, disciples, stones
Counts, princes, lords, queens and kings
They drillin on my land but ain’t no oil to be found
I might be part of the problem
I guess they just tryna prove they can back that shit up
Most of them can’t e’en moonwalk
My lil’ cousin Bump J don’t know what he did when he introduced that goon talk
Is there a Scarface castin at the crib I don’t know about?
So many shortys have tried out for the role
That’s why he slide out and ride out with the pole
Now I see how my daddy felt the dark day he discovered
That black power didn’t keep the lights on
Right on, the dearly departed still rappin to you
Lookin’ for some yellow, white, red, black, brown flesh to write on
How long will they mourn me after I’m out of mind, out of sight, gone
A crash, a head-on collision affects both riders the most
G.O.O.D. Music in the building
Yeah we got ghost writers, they just actually ghosts

8. Real
Featuring Elijah Blake
This is nothing more than Common trying to recreate “The Light” and add a flair of today’s style, hence Elijah on the hook. Ehh…

9. Kingdom
Featuring Vince Staples
Religious sample, gritty street raps, and intelligent Emcees spitting about real world shit! What else could you ask for? This is amazing! No other words but amazing.

10. Rewind That
This is Common reviewing his career. The first describes his journey in the game with No I.D. and even talks about their relationship and the strains that developed until eventually reuniting. The second verse was talking about the late J Dilla and the relationship they had. The songs ends with a clip of Common talking about J Dilla and how much he admired him. Dope way to end an album.

Bottom Line:
Honestly, this album had it’s great moments, the first two songs to start the album were dope, and the final two to finish were crazy too. Yet, with this being a Common and No I.D. album I expected there to be a much more defined direction. It’s only 10 songs long as well, so if Common really had a message to get out he didn’t have space to add much fluff, but we got quite a bit.

Don’t get me wrong, Common was really rapping on this album. He failed to grab and hold my attention though. Half the time I was listening to this album, I just heard weak attempts to make some of his best music in the past. I’m always harder on Emcees who I know have the ability to craft greatness, and maybe that is reflective in the score I gave it.