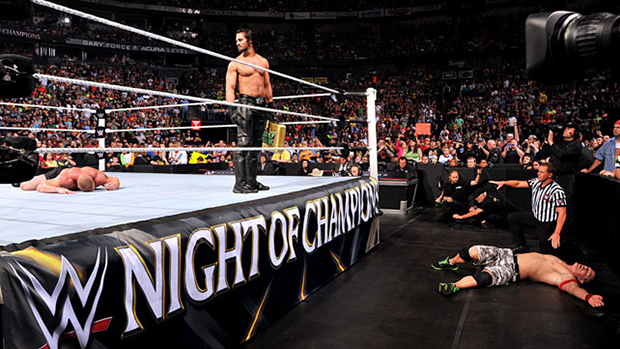 It’s hard for me to judge Sunday’s event WWE Night of Champions. For one, I missed the middle portion and had to watch while fast forwarding so I could watch the main event in real time. And as excited as I was for all the WWE titles being defended, it felt like I was mostly waiting for the main event.

Speaking of the main event. It wasn’t a repeat squash match like last month’s SummerSlam. The match itself told a good story of John Cena doing his homework on Brock Lesnar while displaying his “Never Give Up” attitude.

The ending was another story and we saw Seth Rollins attacking Cena with his Money in the Bank briefcase to the end the match in disqualification. Seth then tried to cash in on a (maybe) beaten Brock Lesnar only for Cena to break that up. I hate when people ruin Money in the Bank cash ins and Cena was a bitch for ruining this one. At least let Dean Ambrose break it up; he was there last night too.

GIF of the night: Dean drops an elbow on everybody