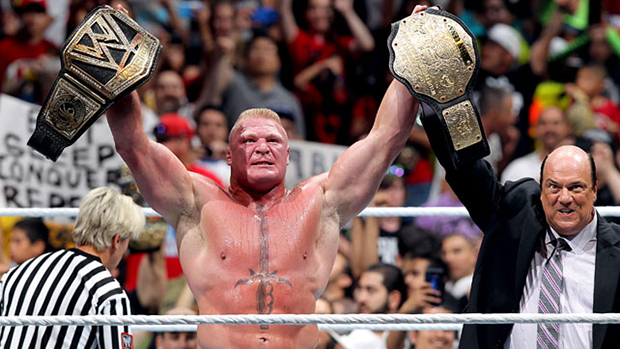 The 2014 edition of WWE’s SummerSlam event is over and I’m happy about the finished product. Not only do we have a new WWE World Heavyweight Champion with Brock Lesnar (More on that later), but every title defended at SummerSlam changed hands. Not to mention that we also got a heel turn in the form of Nikki Bella causing her twin sister Brie Bella to lose to Stephanie McMahon.

But of course the main attraction at this year’s SummerSlam was the match between John Cena and Brock Lesnar (aka “The Biggest Fight of the Summer”). It didn’t end in blood, urine, & vomit like Brock promised, but it wasn’t far from it. John Cena got dominated and it all made sense because he was in fact facing the 1 in 21-1. I’m curious to see how this all plays out in the future. What happens to Cena now? Rematch? And after that, who the hell is worthy of being Lesnar’s next opponent?

GIF of the night: Paige mounts a fallen AJ Lee