Chris Rock has been a staple of comedy for two decades now. He hasn’t just been a figure for Black comedy, but he was one of the first big comedians to embrace Hip-Hop. After years and years of being in box office smashes that didn’t really have any substance or long lasting impact, great movies without the box office success, or great movies like New Jack City that weren’t really “his” moves, he has been adamant about trying to spearhead a film that will both have monetary success and be critically acclaimed.

With that comes Top Five. Top Five stars Chris Rock as Andre Allen who is a actor/former comedian who is preparing to marry reality TV star Erica Long (played by Gabrielle Union). The wedding is set to be aired to the public during the same time that Andre is promoting his new movie which is an attempt to do a more serious role. Enter Chelsea Brown (played by Rosario Dawn) a writer for the times who follows Andre around while he continues to promote his movie, deal with questions about his Hollywood wedding, spend time with his family, and explore the details of why Andre “isn’t funny anymore”.

The title Top Five comes from the belief that every Hip Hop fan has a top 5 list. When Andre is having his most honest and fun conversations, you hear him and his friends arguing their respective lists. It’s a recurring theme in the movie. 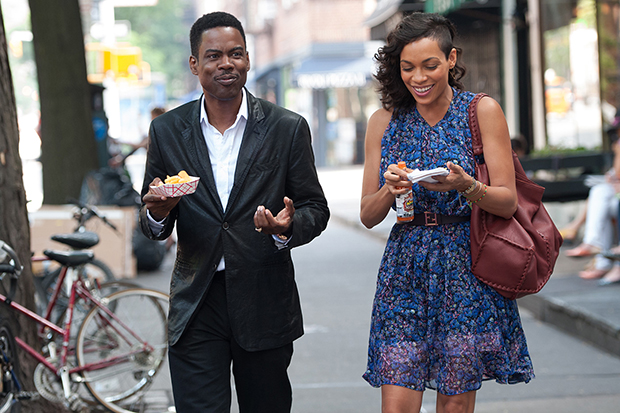 Andre Allen (Played by Chris Rock): The star of the story. Andre Allen is a recovering alcoholic who is marrying a reality star while trying to transition from funny man to actor. Some of the funniest scenes involve Andre reliving past moments that directly correlate to his current day standings. While watching Chris Rock depict this character I couldn’t help but wonder how much of this story was inspired by his real life. Chris does a great job with this character and is hilarious as well.

Chelsea Brown (Played by Rosario Dawson): Chelsea Brown is a writer for Times Magazine who has accepted the challenge of documenting a day in the life of Andre Allen. Her character does her best to get in the head of Andre who she had been a fan of from years back. Unfortunately, while trying to get into the head of Andre, she ends up allowing him to get to know her a little better. All things with the character seem like it will be ok, until we realize the secret that she has been keeping. Rosario does a great job when it comes to creating characters who lovingly annoys other characters. She plays this wonderfully.

This movie is full of guest appearances. It feels like every comedian who has ever been is in this movie. There are guest appearances from Cedric the Entertainer, J.B. Smoove, Jerry Seinfield, and many others. You can tell that Chris at many times just allowed these actors free range as many of these scenes were improved. The cast as a whole do an amazing job, but outside of Cedric the Entertainer most of them are not on camera as much as you would like to see. The casting was brilliant, and there are a couple of surprises I refuse to give away in this write up.

Sidenote: Karlie Redd from Love & Hip Hop: Atlanta is naked in this movie.

Final Thoughts:
The movie is really good. It’s really funny and the way the story was presented was pretty creative. Still I can’t imagine that this movie is one of those movies that you can watch over and over and still find the comedy fresh. I like this movie a lot, but it isn’t the masterpiece that Chris was looking for.