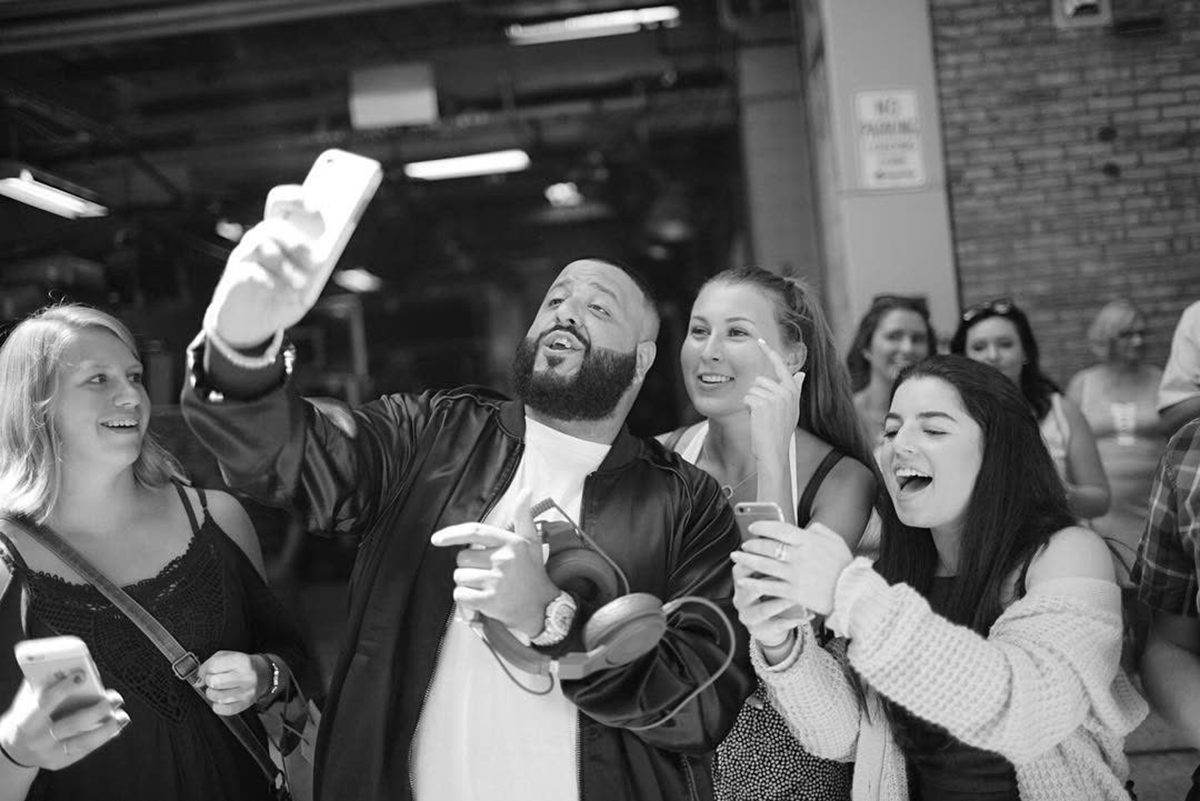 Major Key is DJ Khaled‘s ninth studio album. This album hails to be one of Khaled’s best albums and features 34 artists. With such a feature heavy album, can Khaled get all of those personas to form his best album to date? Or will the Snapchat King go down as just a hypebeast with catchy slogans?

1. I Got The Keys
Featuring Jay Z & Future; Produced by Jake One, Southside, & G Koop
Any verse from the god HOV himself will always be accepted. The visuals for this song are great and started a bunch of pictures of rappers we don’t normally see in suits look like they were up to something. Khaled recently became known for his popularity on Snapchat and he takes full advantage of his catchy slogans on this album.

Two verses from Jay has to equate to some diss or shots with also a reminder of why Jay will always remain on top. In the second verse his shot to Drake reminding him that he will never top Jay makes this one of my favorite songs on the album.

2. For Free
Featuring Drake; Produced by Nineteen 85 & Ullman
Mr. Champagne Papi himself takes over this track and gives it that right touch to make it that summer go to song. I like when Drake pays homage to other artist and copies the cadence or flow of another rapper, like he did here giving props to Too $hort in the first verse. Although this song is simply about having sex all night, it fits the model of Khaled songs being that it so catchy and sure to be a radio hit.

3. Nas Album Done
Featuring Nas; Produced by 808-Ray Cool & Dre
Classic. Timeless. Iconic. Real bars is what I would call it. Nas blessed us much like Hov did with two verses of gold, ranging from commentary on his presence in today’s Hip-Hop and rap culture, to ways on improving urban communities, to dropping the bomb that new music from Escobar is surely on its way. Easily one of my favorite songs on the album. Just to bless y’all with a few bars:

To every baby on the album cover existin’
This trend I was settin’ it came to fruition
I’m assistin’ to push the culture forward
To all my go supporters, go support us
Like a local black-owned grocery store
Cause in the hood shit ain’t passed down through blood
It’s a dub on that, we get government aid
Spend it at they stores, puttin’ they kids through college
We need balance, so we can lease and own Ds in our projects
So I’m askin’ Gs to go in their pockets
The racial economic inequality, let’s try to solve it

4. Holy Key
Featuring Big Sean, Kendrick Lamar, & Betty Wight; Produced by Edclusive & Cool & Dre
A Sean and Kendrick collab has never been a disappointment in the past and hasn’t changed especially on this song. Sean is one of the best of switching up his flow on the song and speeding up and slowing down and it goes along with the beat perfectly. He really did snap on his first verse. I’m not a fan of the Betty Wight feature. I don’t think she’s needed because she just makes the song seem more dramatic than it actually is, but I get it. Kendrick makes you feel the passion in every word of his verse. But if I had to choose, I would give it to Sean for this one.

5. Jermaine’s Interlude
Featuring J. Cole; Produced by DJ Khaled & Hollywood JB
Man, y’all know I ride for Cole, and my man sounds depressed. Introspective but depressed. He talks about everything from not selling your soul to the industry to thinking about retirement. The beat is fire but what else you really expect from Cole. I’m praying that Cole doesn’t actually retire which I doubt but it’s nice to finally hear some new music from him. Cole works on this beat with Earth Gang, a rap group based in Atlanta that has been touring with Dreamville throughout the summer. Khaled did a great job letting Cole bless us with this song.

6. Ima Be Alright
Featuring Bryson Tiller & Future; Produced by The Beat Bully
Only skip worthy song on this album. Future and Bryson Tillers voice don’t mesh well. I get the push to put these two artists together because of their hype, but it’s too much here. Khaled might of played himself.

7. Do You Mind
Featuring Nicki Minaj, Chris Brown, August Alsina, Jeremih, Future, & Rick Ross; Produced by DJ Khaled, Lee on the Beats, DJ Nasty, & LVM
One thing I loved that Khaled did on this album was sample a lot of early 2000 and late 90’s R&B tracks which gave it a really nice touch. Nicki going into singing at the end was a little too much, but Future gave the right touch and saved this song. Sure to be another radio single.

8. Pick These Hoes Apart
Featuring Kodak Black, Jeezy, & French Montana; Produced by Ben Billions & Dyryk
Kodak and French would of killed this track without Jeezy. I like this beat and Kodak’s voice on the hook. French’s Auto-Tune and melodic voice brings us back to the mixtape French. But Khaled, I’m missing the bars. It’s been too many songs in between that all sound like typical Khaled catchy anthem songs. I need the bars back!!!

9. Fuck Up the Club
Featuring Future, Rick Ross, YG, & Yo Gotti; Produced by Qolorsound, DJ Khaled, & Kent Jones
Okay okay, we getting back to it. Ross talking his typical boss talk. Future has officially replaced Drake as go to chorus king. I actually like this song… besides YG’s verse; it doesn’t go. I see him trying to show his versatility but it just doesn’t go.

10. Work For It
Featuring Big Sean, Gucci Mane, & 2 Chainz; Produced by Metro Boomin’
I welcome any Gucci verse at this point. Not to mention Gucci and Tity Boi on this.Iit doesn’t disappoint at all. A lot of Big Sean on this album so I think that’s a sign we should be expecting new music from him soon. It was smart for Khaled to hop on the Gucci wave (Seems like every artist is hopping on a song with him since Guwop has been out of jail).

11. Don’t Ever Play Yourself
Featuring Jadakiss, Fabolous, Fat Joe, Busta Rhymes, & Kent Jones; Produced by Qolorsound & DJ Khaled
Bars. Bars. Bars. This song is a reminder of why New York will always be the mecca of rap and Hip-Hop. Kudos to Khaled for getting these four together on a song. Like always, you will never hear a bad Jadakiss or Fab verse and that doesn’t change here. But although they’re verse’s are wild, give an extra listen to Kent Jones’s verse. He is famous for his song “Don’t Mind” (A song that plays every two seconds on the radio), but that will add to the surprise of how good his verse is at the end of the song:

Fuck a beat for a verse when I could do all three
No pop artist but pop is what you rappers do call me
A lot of washed out niggas tryna find hope in
I’m just tryna raise a son like my blinds’ open
I know the hood well, but glad I ain’t stuck in the streets
I’m pop chartin’ but hood niggas got my song on repeat

12. Tourist
Featuring Travis Scott & Lil’ Wayne; Produced by Key Wayne
This was a little odd to me that this song made an appearance on this album since this is an old Travis Scott song now. The Wayne feature was dope and to me Scott and Wayne actually sound a lot alike here. Weird placement on the album but having Travis Scott on your album is never a bad thing really.

13. Forgive Me Father
Featuring Meghan Trainor, Wiz Khalifia, & Wale; Produced by DJ Khaled
This gave me Chance the rapper vibes. NOT because it sounds anything like Coloring Book, but because it has a very gospel and holy vibe to it. This is a growing trend now in mainstream Hip-Hop where artists are shining a light on their spiritual nature. Also when I saw Meghan Trainor on this I was ready to skip it, but giving it a listen it can maybe go on my Sunday morning playlist. Maybe.

14. Progress
Featuring Mavado; Produced by Mineral Boss Productions
As always Khaled always, pays gives a spot to his Jamaican dancehall reggae artist, Movado, and he is also known for embracing a lot of dancehall music on his Snapchat. I like Movado but I don’t like this song for him. Dut still shout out for Khaled shining light to a genre of music that doesn’t always get played in the mainstream, unless Drake is trying to copy the sound…

This is what a DJ Khaled album is: A ton of featured artists, catchy songs (Or anthems as he would like to call it), and a lot of catchy phrases. Although I would say that for most Khaled albums, this one is up there as the best. The songs actually sound like song. They go together and they’re not just a bunch of popular artists thrown on a record to just get headlines. My two favorites, “Nas Album Done” and “Don’t Play Yourself” actually have bars and good quality verses which makes the album ten times better than the previous Khaled album. Although the Snapchat King can seem fake with all of his well placed slogans in every interview he has and his obsession with referring to “they”, Major Key is a well made album. Good job Khaled.