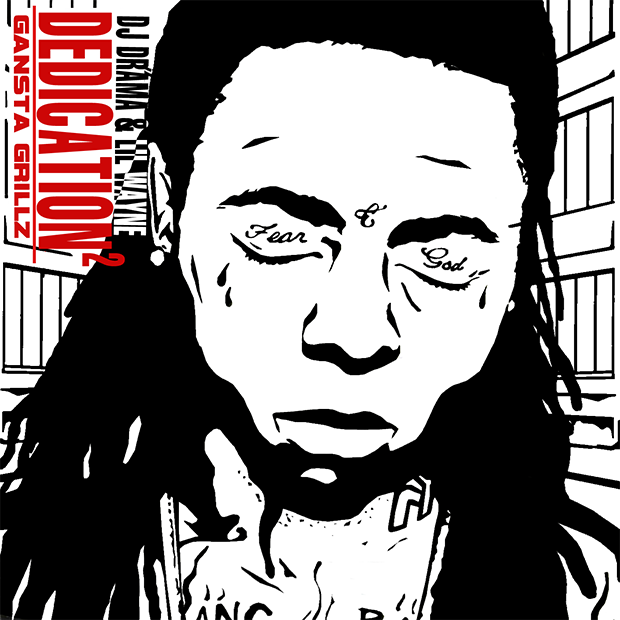 Every time Lil Wayne & DJ Drama team up and put out a mixtape they produce must hear material. DJ Drama has become everyone’s favorite DJ since he started his line of Gangsta Grillz mixtape. Wayne has always been a good rapper butit wasn’t until he began releasing his Squad Up mixtapes that people began to notice his lyrical ability. On Dedication 1, Wayne showed that he wasn’t just your average rapper. But on the Dedication 2, Wayne makes people wonder if he truly is the best rapper alive. We here at nappyafro.com know that the Dedication 2 has been out for a while, but we did this review for anyone who hasn’t heard this album and has wondered what the hype about Lil Wayne is all about

The Best In The Business
Intro track

They Still Like Me
Produced by Jamall Willingham & Maurice Gleaton (“Oh, I Think They Like Me” by Dem Franchize Boyz)
Anyone who doesn’t believe Lil’ Wayne is one of the top rappers in the game should listen to this song.

Cannon (AMG Remix)
Featuring DJ Drama, Freeway, Willie The Kid, Detroit Red, & Juice; Produced by Don Cannon
This track is a compilation of rappers from Wayne to Freeway and a lot of others. Most memorable line: Niggas bitin’ so I gotta tote the cannon/Listen close I got duct tape and rope, I’ll leave you missin’ like the fuckin’ O’bannon’s

Workin’ ‘Em
Produced by DJ Infamous
We have the first whack song of the album. Nothing hot on this one.

Sportscenter
Produced by DJ Green Lantern (“The Game Iz Mine” by Jay-Z)
Wayne talks about his love of sports and tries to make a song about it. That shit doesn’t come off to well.

Welcome To The Concrete Jungle
Featuring Juelz Santana; Produced by Clayton Haraba
Juelz starts this song off and dooms the track with his first 2 bars. Wayne comes in and tries to save this track but he can’t deliver enough hot lines to rescue this one.

Spitter
Produced by Swizz Beatz (“Spit Your Game” by The Notorious B.I.G.)
This track rejuvenates the album from what was looking like the first inferior project Drama and Wayne ever put together. This may be the hottest song on the album and he may have delivered the albums most memorable line on this one: “I’ve been ready since ’81 and I was born in ’82.

South Muzik
Produced by Organized Noize (“Player’s Ball (Reprise)” by Outkast)
He gets back to business on this one by simply delivering hot line after hot line.

This What I Call Her
Produced by 9th Wonder (“Lovin’ It” by Little Brother)
Not my type of song but it is well done.

Dedication 2
Produced by Needlz & Spike n’ Jamahl
“I’m not what the games been missing, that’s my nigga Juelz, I’ve been here since twelve”.

Poppin’ Them Bottles
Featuring Curren$y & Mack Maine; Produced by DJ Paul & Juicy J (“Poppin’ My Collar” by Three 6 Mafia)
This one features Currency & Mac Mane. Weezy has to remember that not all of your friends can rap.

What U Kno
Produced by DJ Toomp (“What You Know” by T.I.)
Wayne comes back with a solo track that makes you forget about the poor group track that you just heard.

Where Da Cash At
Featuring Curren$y & Remy Ma; Produced by The Runners
Remy Ma FUCKIN SUCKS!!! She was horrible on this shit but luckily she raps last so that you can skip after Wayne.

Weezy On The Streetz Of N.O.
Interlude

Walk It Off
Produced by Mannie Fresh (“Don’t U Be Greedy” by U.N.L.V.)
The beat is an up-tempo bounce track, so Wayne takes a bounce type flow on this one; He kills it.

Hustlin’
Produced by The Runners & Clayton Haraba (“Hustlin'” by Rick Ross)
More murder on wax. Wayne takes the beat from Rick Ross’s “Hustlin’” when it was still fresh and destroyed it.

Gettin’ Some Head
Featuring Pharrell; Produced by Xcel & Clayton Haraba (“Gettin’ Some” by Shawnna)
This sounds so much better than the original its crazy! Pharrell messes up the flow of the song a little bit though.

A Dedication After Disaster
Interlude

No Other
Featuring Juelz Santana; Produced by Pimp C, N.O. Joe, & Just Blaze (“Murder” by UGK/”Intro” by Jay-Z)
“I know niggas that shoot dope, arms lookin like a race track/Nigga missed a vein in his neck, his whole face fat.” Juelz says nothing that is memorable.

Georgia… Bush
Produced by DJ Green Lantern; (“Georgia” by Field Mob & Ludacris feat. Jamie Foxx)
Wayne vents about Katrina, mainly taking out his frustrations on George Bush. After “Georgia Bush” there’s a hidden track that features the beat from “Ambitionz Az A Ridah” that Wayne murders on the last lap of the album.

Bottom Line:
Wayne puts damn near every rapper in the game in his rearview with this one; I mean dude show he is lyrically head and shoulders above 97% of the rest of the rappers in the game. But for Weezy to really be considered the “Best Rapper Alive” he is going to have to make a classic album instead of classic mixtapes.

nappyPicks: “Get ‘Em”, “They Still Like Me”, & “Spitter”. These tracks really showcase how hot this dude is.