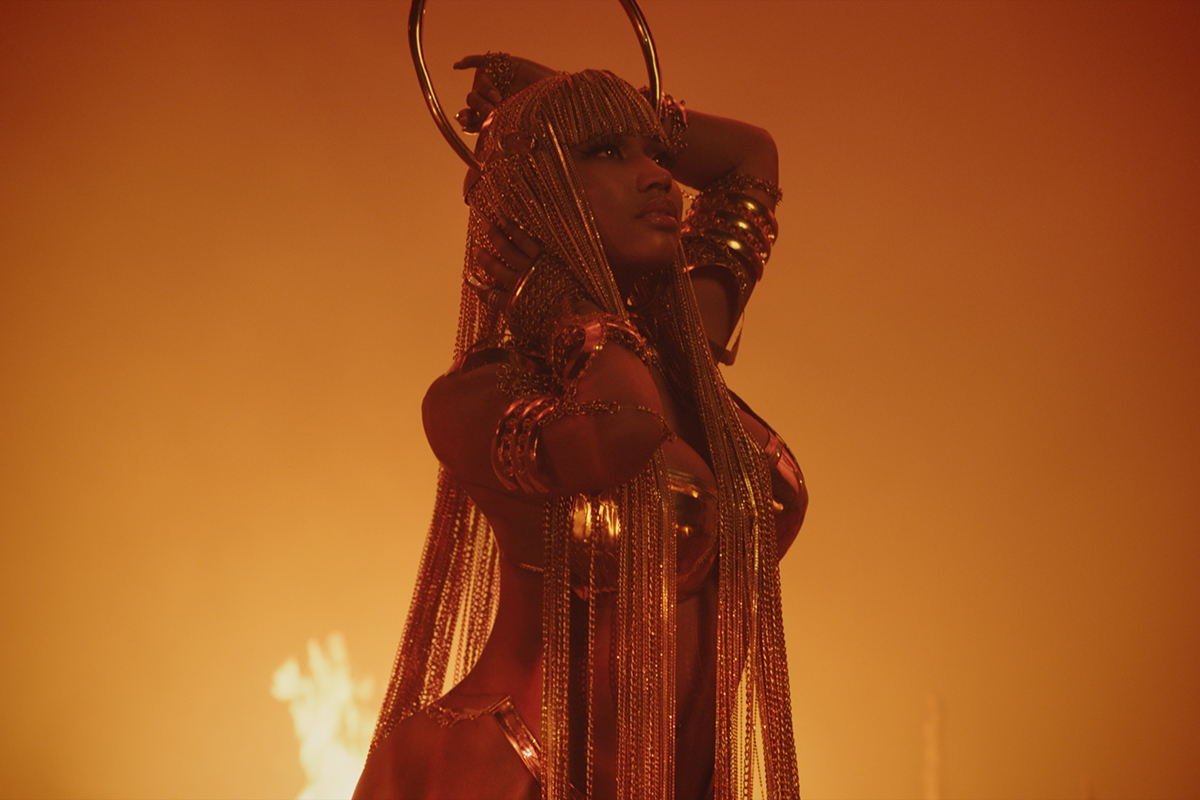 The landscape for female rappers has changed since the release of Nicki Minaj‘s last album in 2014. While she once dominated as the only bankable woman rapper in the game (Remember when she won six straight BET Awards for Best Female Hip-Hop Artist?), that’s definitely not the case in 2018. Besides being in a highly publicized beef with Remy Ma last year, she now has an unexpected contemporary in the form of Cardi B.

Well, Nicki Minaj is back to reestablish her seat as the Queen of Hip-Hop with a new album appropriately titled Queen. And telling from her current insane press run (Which I won’t get into in this review), this album seems to be important to Nicki. So is Queen the album that reaffirms Onika’s place on the top of the female MC Mount Rushmore? Let’s find out.

1. Ganja Burns
Produced by J. Reid
The album starts off with the mid-tempo and African drum led “Ganja Burns”. It’s an odd place to start off. If you aren’t paying attention, the production would have you believe she’s rapping about lost love, but the lyrics are about her dominance as a female MC and take a few swipes at Cardi B (“Unlike a lot of these hoes whether wack or lit/At least I can say I wrote every rap I spit”). It all sounds kinda boring to me which is probably mostly due to the chorus. This album needed a better intro.

2. Majesty
Featuring & Produced by Eminem & Labrinth
I’ll admit that I sighed when I saw Eminem’s name, because who wants to hear Eminem rap in 2018. But to my surprise “Majesty” is way better than I expected. The piano heavy production feels like something Eminem would rap on (He also co-produced the track) but Nicki fits in here with no issues and does her thing.

3. Barbie Dreams
Produced by Mel & Mus & Ringo
Out of all the songs on Queen, “Barbie Dreams” made the most noise. And why wouldn’t it? Nicki Minaj recreating Notorious B.I.G.’s “Just Playing (Dreams)” in her own image (And taking a nod from 50 Cent’s “How To Rob”) is made for the social media age. Funny enough, one of Nicki’s biggest enemies, Lil Kim, did this same thing back in 1996. Hell, even Nicki did this same kind of track before back in 2007. Either way it’s all in good fun and it still works.

The end of this track has a beat switch and I’m not sure if it’s a part of “Barbie Dreams” or if it’s an interlude, but it might contain Nicki’s best flow on the album.

4. Rich Sex
Featuring Lil Wayne: Produced by J. Reid & Big Juice
This felt like it was made just to get Lil Wayne on the album. It also feels like a song Nicki & Weezy have made many many times before. Boring but one consolation is that I see a lot of women I follow on Instagram quoting “If you let that broke nigga fuck, we tellin'”. So that’s something.

Partying in Paris, these bitches is embarrassed
‘Cause they know I’m the queen, I still didn’t pick an heiress
Mirror, mirror, who’s the fairest?

At first I didn’t feel the Auto-Tuned chorus but I’ve grown the actually like it. Not bad.

6. Bed
Featuring Ariana Grande; Produced by SupaDups, Beats Bailey, Ben Billions, & Messy
I remember there was a lot of press for the release of the Ariana Grande featured “Bed” and the accompanying music video. I still don’t see what the hype was about. It’s a paint-by-numbers pop track and nothing special. Things like this are needed for an album these days I guess but it’s a skip for me.

7. Thought I Knew You
Featuring The Weeknd; Produced by J. Reid
I feel like every time The Weeknd does a feature on a song, it basically turns in a Weeknd song. Props to Nicki because that doesn’t really happen here. That doesn’t mean it’s an instresting outing. Onika and Abel sing back and forth but nothing worthwhile happens. I will admit that I’m not the biggest Weeknd fan so check this one out for yourself.

8. Run & Hide
Produced by Rex Kudo & Sevn Thomas
If you were looking for a good R&B song by Nicki Minaj, “Run & Hide” is that. The premise isn’t original as she is talking about having relationship trust issues, but it’s well executed and the singing by Nicki isn’t cartoony as some of her attempts before.It works.

9. Chun Swae
Featuring Swae Lee; Produced by Metro Boomin
This is like if Nicki wanted her version of “Black Beatles” (Which technically she has already done). That’s not necessarily a bad thing though. While Swae Lee mostly gives his trademark high pitch delivery via the chorus, Nick’s verses reminds me of earlier in her career. And while her final verse kinda falls apart, this has a chance to be a banger.

10. Chun-Li
Produced by J. Reid & Nicki Minaj
The first songs Nicki Minaj released off this album were “Chun-Li” & “Barbie Tingz”. Of the two, I actually preferred “Barbie Tingz”. “Chun-Li” grew on me though, even though the character this track was named after was never a bad guy as the hook would have you believe. I still like it though.

11. LLC
Produced by Solo, DJ Wes, & JFK
On “LLC” the Queen makes sure we remember the accolades achieved in her career:

It your trademark Nicki complete with voice changes over a quirky trap beat. She is talking that shit and The Barbs will love this one.

12. Good Form
Produced by Plu$$ & Mike WiLL Made-It
Speaking of Nicki Minaj fans, “Good Form” is the song they will most likely shake their asses to. And if the plan was to make a twerk song, mission accomplished. Apparently Nicki freestyle the whole song and I can see that.

Fun Fact: The song was used in the same Mercedes-Benz commercial that was referenced on “Majesty”.

13. Nip Tuck
Produced by June Nawakii, JMIKE, & Kane Beatz
From the title alone I thought this would be a song that talked about plastic surgery (Wouldn’t that be something?). But no, “Nip Tuck” is about changing up on a lover that took her for granted (“I’ma have to switch, switch up on you/Snip, snip, hit that nip tuck on you”). It’s a regular pop song so I wasn’t that to into it. I wouldn’t be surprised if it turns out to be a hit later though.

14. 2 Lit 2 Late Interlude
Produced by J Gramm & Frank Dukes
“2 Lit 2 Late Interlude” feels like when artist didn’t finish a song so they just put it on an album as a interlude. It’s under a minute and it’s basically singing “Boy, you’re too much, too little, yeah, too late” over and over again. Next.

15. Come See About Me
Produced by Cirkut & Chris Braide
While “Come See About Me” isn’t they first pop song on this album, it leans more towards ballad. It really doesn’t distinguish itself from something you might hear on a Taylor Swift album, it does show the range that Nicki Minaj has. This still ain’t for me though.

16. Sir
Featuring Future; Produced by Metro Boomin & Zaytoven
This seems only right. Besides being scheduled to go on tour (canceled or not), Future and Nicki just had a collaboration last year with “You da Baddest”. Both use “sir” in their rhymes schemes over a trap beat, thus the name of the track. It’s cool but nothing to write home about (Like their last collaboration).

17. Miami
Produced by Murda Beatz
Nicki getd gutta on “Miami” as she once again links up with producer Murda Beatz. Nicki raps about hitting up Florida and having them Percs and Xannies for the low-low. And while this is juxtaposition from other songs on the album, I miss when she rapped about more gangster shit (“Chi-Raq” is still one of her best verses). I don’t mind this.

18. Coco Chanel
Featuring Foxy Brown; Produced by J Beatzz
If Nicki Minaj and Lil Kim was on better terms, this would be Kim instead of Foxy Brown. I respect that Nicki saluted a female rapper that came before her, and I guess this makes sense seeing that both are Trinidadian, but I don’t want to hear a washed up Foxy Brown rap in 2018. This should have been left on the cutting room floor.

19. Inspirations Outro
Produced by J Beatzz & Blank
This is basically the outro from the previous song “Coco Chanel” with Nicki just shouting out her Caribbean inspiration from Beenie Man to Mavado to Bob Marley. This probably should have been kept on the previous track. That ends Queen.

The thing that puzzled me about this album was Nicki Minaj previously saying that she wanted to get back to a boom bap sound similar found on the her track “Barbie Tingz” (Which is now a bonus track on this album). I wish we got that album instead of Queen.

Let’s make one thing clear: Nicki Minaj is probably the best female rapper of all time and is easily in the running for the most talented. The thing is, Queen doesn’t fully showed those abilities. There are a some instances where Nicki shows her rhyming skills as well as her ability to craft pop records. But on the flip side those same songs are generic pop records and the album contains rehashes of previous songs and collaborations that make you wish Nicki expanded her subject matter.

All that being said, Queen is not a terrible album. It’s definitely something Nicki’s devoted fanbase will love and recite with pride. And while the female MC market is more competitive these days, talent-wise Nicki Minaj is still top of the class. Even if this album doesn’t fully show that.