DJ Khaled – We The Best [Review] 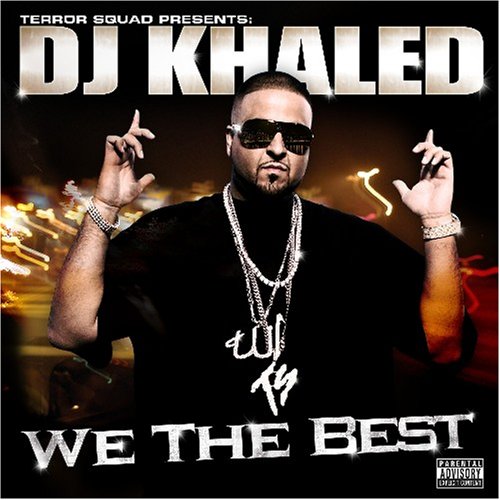 DJ Khaled has the hook ups. Not since Funkmaster Flex and his 60 Minutes Of Funk series has a DJ gotten together the hottest rappers off today (Jeezy, Juelz, T.I., & Weezy, to name some). But this is a gift and a curse when you use this formula to make compilations. Sometimes there isn’t enough space to get one cohesive album.

Well this is DJ Khaled second album, so let’s see if he brings a good compilation album.

1. Intro (We The Best)
Featuring Rick Ross; Produced by Dj Khaled
The album starts of with DJ Khaled telling the fans “We the best!” (get used to that). He almost raps in the beginning then Rick Ross comes on and starts rapping. The beat (produced by DJ Khaled) is piano driven and laid back and is actually good.

2. The Movement (Skit)
Featuring K. Foxx
The intro to “We Takin’ Over”.

3. We Takin’ Over
Featuring T.I., Akon, Rick Ross, Fat Joe, Birdman, & Lil’ Wayne; Produced by Danja
This is the first single off this album. Personally, I think this would have been the song of the summer if this hadn’t been released in January/February. It has an all-star cast; I’m sure you already heard it a few times. Good single.

4. Brown Paper Bag
Featuring Young Jeezy, Juelz Santana, Rick Ross, Fat Joe, Dre, & Lil’ Wayne; Produced bu Cool & Dre
This one is already a mixtape banger and is probably my favorite song off the album. Cool & Dre make an anthem about drug money that is hard not to like. I like the way the hook and the verses are structured. This is reportedly going to be the second single. Hot song.

5. I’m So Hood
Featuring T-Pain, Trick Daddy, Rick Ross, & Plies; Produced by The Runners
This is an all Florida track produced by The Runners. T-Pain does the hook while Trick, Ross, and Plies rep there hood. Not very lyrical, but I know this one will be a hood favorite.

6. Before The Solution
Featuring Beanie Sigel & Pooh Bear; Produced by DJ Khaled
This is basically a solo song by Sigel (Pooh Bear sings the hook). It’s a primer for his album, The Solution, scheduled to be released later this year. He grazes subjects that people wanna know about like his Roc-A-Fella and State Property affiliations. This kinda slows down the album but it’s a solid track.

7. I’m From The Ghetto
Featuring The Game, Jadakiss, & Trick Daddy; Produced by Cool & Dre
This is an introspective track about being from the ghetto. The Game and Jadakiss show up along with Trick Daddy and do average verses. The Disney sounding hook here almost makes the song unbearable though.

8. Hit ‘Em Up
Featuring Bun-B & Paul Wall; Produced by The Runners
I personally skip this one. This song sounds like all the other twenty Bun-B and Paul Wall collaborations. I heard it all before.

9. S’ On My Chest
Featuring Lil’ Wayne & Birdman; Prodcued by Kane Beatz, DJ Nasty, & LVM
This song could have easily fit on the Like Father, Like Son album with no problem. It’s an average song for Baby and Weezy. If you a Wayne fan you might want to check this one out.

11. The Originators
Featuring Bone Thugs-N-Harmony; Produced by Cool & Dre
Dang, Bone Thugs got a song on the album? The song is average; the build up was better.

12. New York
Featuring Jadakiss, Ja Rule & Fat Joe; Produced by Cool & Dre
It’s good to see Ja Rule, Kiss, and Fat Joe back together but this song doesn’t do the original justice. Why is Khaled on the hook? The song is typical; they should of gave this song a different name.

13. The Streets
Featuring Shareefa & Willy Northpole; Produced by The Runners
This and the following two songs are bonus tracks only available when you buy the album at Best Buy. This particular song is a R&B song that doesn’t fit on this album. I skip it.

14. No Hook
Featuring Jim Jones, Styles P, Cassidy, & Rob Cash; Produced by Steve Morales
I’m surprised they would put Jones, Styles, and Cassidy on a bonus track. The song is dull…until I hear Cassidy. He killed it when he said, “I keep a nine the same kind Shyne used for Diddy, plus a keep a chopper to pop when I cruise the city”. I’m glad to hear him doing well.

15. Choppers
Featuring Joe Hound, Dre, & C-Ride; Produced by Cool & Dre
This sounds like a bonus track; thrown on the album at the last minute.

Bottom Line:
This album is almost like any mixtape you might buy off the block. The only different is that the songs here are original. While it does have some heat on it, you might find some fast forward material. At the end of the day, what you get here is a basic compilation with all-star talent.