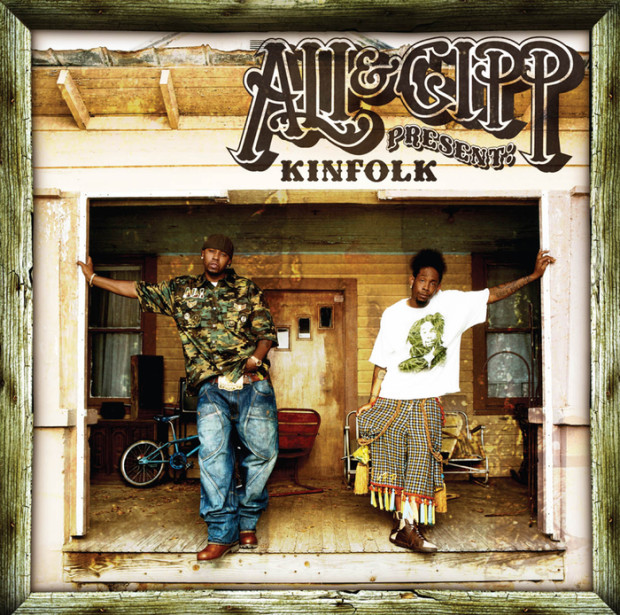 One of the strangest collabos in the South, Ali from the St. Lunatics joins with Gipp from Goodie Mob to create Kinfolk. After hooking up on “Grillz” with Nelly and Paul Wall, the two clicked up and decided to release an album. With different styles from both sides, will the two blend to make a good mix or just another bad Hip-Hop concoction?

The albums “Intro” starts with Big Rube doing what he does best, spitting knowledge! You have to love Big Rube. Next up is “Hood”; the production is tight and Pimp C makes an appearance and drops a gem. Gipp did his thing and Nelly for a change dropped a decent verse, but it was obvious that Ali was the weak link of the bunch. “N Da Paint” has Pimp Juice on the hook, which is horrendous, and he drops a weak sixteen. With lines like “How can I go broke when I’m one of Bob’s cats!” Are you serious? Ali’s verse was decent, but not worth checking out. “Go ‘Head” is the next song and it is not good. The beat is simple and a wack chorus did the song in. Gipp did what he could on the track. “Almost Made Ya” follows with Gipp rapping like Gucci Mane. This is one for the “A!” SKIP! “Get on the Floor” with David Banner on the track; this one is aimed at the ladies. The beat is straight, but the lyrics are suspect. “That’s Me” is a stupid concept and a wack track; skip this one! “Lean’n” is next featuring Muphy Lee and Nelly and continues the flow of subpar music. “I Told Ya” with Cee-Lo and Bun-B has weak production but they weather the storm. “If We Fuck” is another bubblegum song…NEXT! Three Six Mafia joins in on the fun on “What’s the Business”; DJ Paul surprisingly produces a dud. Somehow I think the Oscar has messed up the 3-6. “All Night” has Juvenile on it, and he picked the wrong song to be on…SKIP! “Work That, Twerk That” is one for the booty clubs. I have one word: GARBAGE! The next song on this opus is “Forever and Ever”. It’s a remake of “Let’s Chill” by Guy. Gipp and Ali talk to the ladies on this one. I can’t feel it, but some girls might dig it. “Get By” follows with a crazy beat, but weak lyrics makes production useless. “No God But You” closes the record. This track is decent, but THANK GOD THIS ALBUM IS OVER!

Bottom Line:
This was not a good album at all. The cameos were good, but the strange union of Gipp and Ali was just too much to bear. Their styles did not mesh at all. When you have two guys with different styles but no common ground, you are flirting with disaster. This album was a bust, back to the drawing board guys!