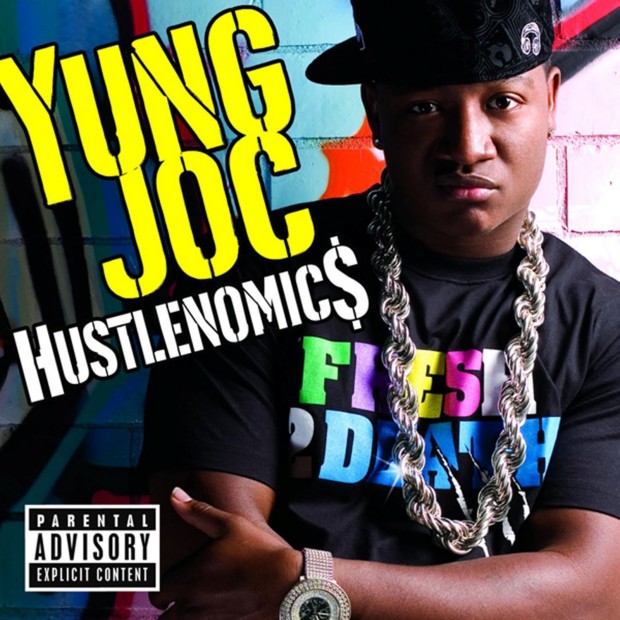 After coming up short of a platinum plaque off of 2006’s New Joc City, Yung Joc is back with a new one titled Hustlenomics. The Bad Boy South/Block Entertainment artist is dropping an album on the heels of two big radio hits, “Coffee Shop” and “Buy U a Drank”. With Joc’s infectious singles and club beats be enough to dodge the sophomore jinx? Let’s check it out!

The “Hustlenomics (Intro)” of the album has Joc giving us the definition to Hustlenomics. How has Joc become a bigger “Hustler” since he became famous, and why would he publicize it? The beat on the song is tight though, and the song is worth listening to. The next song up is “Play Your Cards”, and for some reason he sounds like T.I. on this one. The beat on this one is nice, Cool and Dre did there thing. Besides the fact that he sounds like T.I. the track is a winner! Yung Joc gets an assist from Gorilla Zoe on the radio friendly “Coffee Shop”. The sing a long hook and beating bass line certified the radio spins. Gorilla Zoe appears again on “Bottle Poppin'”, produced by Don P, and this one is pretty tight! The hook is what set it off! The boss makes an appearance on “Hell Yeah” produced by the Neptunes. Once again he sounds like Tip on this one sped his flow up a little bit. The song was decent until Diddy ruined it with his terrible delivery. DJ Quik produced “Cut Throat” featuring the Game and Jim Jones. Biggie got mentioned in every verse, not really surprising considering Chuck Taylor was in the song. But the track is a banger and Joc held his own against the big boys. “Hustlemania” is a skit that is kind of humorous, but not really. “I’m A G” featuring Bun B and Young Dro is one for the hood. This one will be bumping out of every old school in the neighborhood! Bang this one! The Neptunes reappear on “BYOB”. The production sounds rock and rollish, and this is not Joc’s lane. Listen to the way Joc is flowing on this one…weird, huh? “Pak Man” is Joc’s little side kick and he got his own song on the album. The song isn’t that bad, the kids gone love it. “Gettin’ to da Money” features Gorilla Zoe and the song is kind of boring, especially the hook. Rick Ross and Snoop jump on “Brand New”, a rip of an oldie. Snoop put up a decent effort and Ross gave a typical sixteen. This is the definition of album filler. “Livin’ the Life” follows and this is that R&B/Rap song that everybody does these days. The girls will dig this, but the guys won’t. Next is “Momma”, a song dedicated to his mom, the beat is thumping, provided by Jazze Pha. The song is tight. Makes you reminisce. The Dade County Mayor makes an appearance on “Chevy Smile”. The beat is your typical Jazze Pha production, but Joc and Trick Daddy ride the beat. This one will be jamming in the club! Finally is the title track “Hustlenomics”, and like the rest of the songs near the end, is on the not so hot side. He sounds like T.I. again, this is a pattern. Come on Joc, get your own flow.

Bottom Line:
I wasn’t expecting Nas or Jay to walk through that door, but considering who Joc is, and what he does, he does it well. You are not getting Hip-Hop quotables from Joc. You are getting simple rhymes, nice beats, and catchy hooks. Someone has to do this to make the DJ’s happy. Think of Yung Joc as a down south Mase. He does what he does for TV. While Joc’s album won’t win any “backpackers” over, he definitely put together an album to make people dance and have a good time.