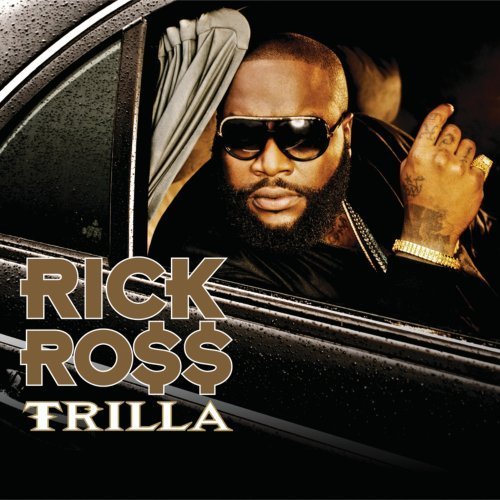 Two years after releasing his gold selling debut Port of Miami, Rick Ross readies a new album, Trilla. The “Boss” has been putting in some work lately with some of his friends, you might have heard of them; Jeezy, Khaled, Weezy, Birdman, and Fat Joe. They have managed a way to make hits, but can they breakthrough and make an album? Rick Ross is ready to take his game to the next level, and everyone knows how hard it is to come with the follow up to a successful first album. But Ross is a HUSTLER, so you know he can withstand some heat.

Trilla Intro
Produced by J.U.S.T.I.C.E League
Ross basically shouts everybody out in the world he’s cool with. The beat will have you crunk! I like the way the album is starting out.

All I Have In This World (Japanese Denim)
Featuring Mannie Fresh; Produced by Mannie Fresh
Mannie uses an old Scarface sample on this one, but you know how a typical Mannie Fresh song is, up tempo beat, certified club song. The song is straight, not much subject matter though.

The Boss
Featuring T-Pain; Produced by Jonathan Rotem
T-Pain makes his mandatory appearance on Ross’ album. The beat is kind of popping, but T-Pain’s magic isn’t that magical anymore. The song is a banger, but the singing by T-Pain isn’t hot on this one.

Speedin’
Featuring R. Kelly; Produced by The Runners
This was the first single off the album. This didn’t have the impact that “Hustlin” had, but it created the buzz needed. Personally, I don’t like the track. The beat isn’t up to par, but the lyrics are. I don’t like Kells on the hook either.

We Shinin’
Produced by Bink!
Ross excels on the dope production provided by Bink!. Ross spitting about the way he shining on these dudes these days. You gotta love this song just because of the production. The beat is SICK!

This Is The Life
Featuring Trey Songz; Produced by Elvis
When Ross gets a nice beat, he knows what to do with it. The singing wasn’t tight, but I’ll give it a pass because the beat is on point. The song is worth listening to.

This Me
Produced by DJ Toomp
The “IT” producer Toomp makes his appearance on the album, and he blesses Ross with a gem, kinda sound like “Big Brother” but that might just be me. The song is HOT, so check it out!

Here I Am
Featuring Nelly & Avery Storm; Produced by Drumma Boy
Ross shows his sex appeal on this one. One thing Ross does well is make songs about women, well not better than drugs. Nelly didn’t do too bad either, well that’s good for Nelly. But the song is kind of fly, definitely better than his last crossover song.

Maybach Music
Featuring Jay-Z; Produced by J.U.S.T.I.C.E League
The Boss makes a song with his boss and its some smooth music that you can imagine bumping in a Maybach quietly. Hov didn’t slip up on this one, he spit some heat, and Ross kept up with the big homie. The song was missing Young Jeezy, but it’s still fire.

Billionaire
Produced by J.U.S.T.I.C.E League
Flowing over what sound likes some Kanye joints, Ross flows effortlessly over the beat. He talks about his favorite subject..MONEY! Ross loves money and the fact that he is “Rich” and he lets us know on the song.

Luxury Tax
Produced by J.U.S.T.I.C.E League
Weezy, Trick Daddy, and Jeezy join up to make it an all star song. The lyrics and production is top notch on this one. Everybody brings their “A” game to the table. BANGER!!!

Reppin My City
Featuring Triple C’s & Brisco; Produced by Carlos & Dada
Features an up tempo track that has Ross spitting a faster flow than what he usually does. The crew also jumps on the track, but the beat is too fast for me. It has that hipster hop feel to it. I guess this is one for the clubs, they’ll like it there.

I’m Only Human
Featuring Rodney; Produced by DJ Nasty
Now Ross ends the album with this song, kind of strange, when it sounds like one for the middle. The song’s lyrics are tight, but once again he’s hurt by the singing on the hook. The singer over sings when he doesn’t need to, so if you can get by that, you might like the song.

Bottom Line:
This album lived up to the expectations. I didn’t think that Rick Ross was going to sway away from what works for him. He knows that fans like to hear his “Street Talk” and that is what he gives them. Ross’ subject matter may not include worldly events, but it covers the hood! He talks about his habitat and what he sees around him. When you have a certain recipe that works, you don’t change the recipe, you might add some here, take away some there. That is what Rick Ross did; he took his formula and made it appealing to more consumers while still keeping his base satisfied. This album is balanced out with different feels that complement each other. All in all, I have to say that this project was a success.