Fat Joe – The Elephant In The Room [Review] 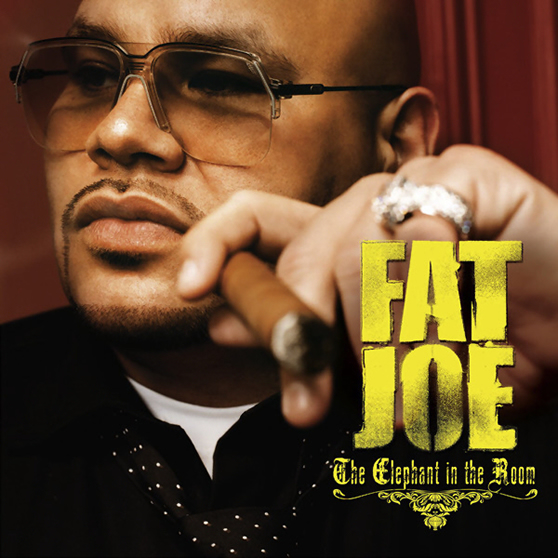 Fat Joe has been in the Rap game since 1991 and during this time has been through a lot of changes. Be it as a part of D.I.T.C. or forming Terror Squad, recruiting the late great Big Pun or beefing with 50 Cent, Joe Crack has always tried to keep up with the times.Unlike a lot of New York rappers finding it hard to get radio play, Fat Joe has aligned himself with Southern rappers to stay relevant; out of all the rappers that frequently rides with DJ Khaled, he is the only one not from below the Mason Dixie (Jeezy, Wayne, Rick Ross, Birdman, & Fat Joe). Even though Joey has been steadily releasing albums, lately he hasn’t gave the fans anything other than drug references. Also, I guess even with all the accomplishments and longevity, Joe feels slighted because he titled his eighth album The Elephant In The Room. Will this album correct this?

1. The Fugitive
Produced by Street Runner
The album starts off with an appropriate intro with Fat Joe talking shit. Think Jay-Z’s “The Dynasty: Roc La Familia Intro” with a dash of Lil’ Wayne delivery. Joe covers such thing as his hate for censorship (“Nigga, nigga, nigga…”), his beginnings (‘You gotta flow Joe.”), and of course drugs. Nice beat on the intro but I hope Joe goes deeper than drugs references.

2. You Ain’t Sayin’ Nothin’
Featuring Dre & Plies; Produced by Cool & Dre
Automatically when you hear the beat, Cool & Dre signature drums come out at you. Basically the song is about getting money and how if you ain’t talking about money you…well you get it. Plies shows up on the second verse; he’s okay but this beat is too up-tempo for him. The song is predictable but all right.

3. The Crackhouse
Featuring Lil’ Wayne; Produced by Steve Morales
This is the first “street” single off the album. The duo that brought “Make It Rain” return with not so much a sequel but remnants of the first song. Once more Weezy is just the hook man here while Joe talks greasy. The beat drums are hard here and sounds like it’s definitely for the hood. Wayne once again steals the show too.

4. Cocababy
Featuring Jackie Rubio; Produced by Danja
Fat Joe makes a song after something he now says before every song. Now he just needs to make a song called “Crebs Mania”. The simplistic bass in this song actually makes it radio ready. I think every rappers needs a song like this; just asks Jay-Z (“Izzo”) or Diddy (“Diddy”).

5. Get It For Life
Featuring DJ Khaled & Pooh Bear; Produced by DJ Khaled
The hook on this one brings down the whole song. DJ Khaled produces a serviceable beat as well as his trademark ad-libs (“Nigga we the best!”). But that hook though…ugh.

6. Drop
Produced by Swizz Beatz
The beat on this one sounds almost like another Swizz…um beat. Beyonce’s “Get Me Bodied”. This is a blatant attempt at the clubs complete with crowd participation (“Make the babies go ‘Oh, and the mommies go ‘Ow'” ). Even though I really wasn’t feeling this one, I guess Fat Joe is going with what has worked for him in the recent past.

7. I Won’t Tell
Featuring J. Holiday; Produced by The Hitmen
This is the official first single off this album and it’s currently receiving mad radio play. It has that Biggie feel to it too. Even though I wouldn’t keep this on my iPod, it’s an alright song that doesn’t try to reinvent anything.

8. K.A.R. (Kill All Rats)
Produced by Street Runner
Even though the sample and title deals with snitching, Joey sometimes has a hard time staying on subject. The beat, along with the sample, is kinda gutter though.

9. 300 Brolic
Featuring Opera Steve; Produced by The Hitmen
I guess this song is inspired by the movie of the same name. It’s a cool concept about being ready for war, but the hook is awkward (I loved Opera Steve on Big Pun’s “Off Wit His Head” though). Besides that I guess its okay; but just okay though.

10. Preacher On A Sunday Morning
Featuring Pooh Bear; Produced by Scott Storch
Joe and Scott Storch once gain hook up for a banger. This is by far my favorite song off the album. The title is referring to “Stay fresher than a preacher on Sunday morning” and has Joe Crack slick talking again. He even drops disses here and there; “All these mixtape rappers now wanna claim king” (Papoose?) or “Live at Madison Square they giving group hugs” (T.I.? Kanye? Jay-Z? 50 Cent?). Nice track.

11. My Conscience
Featuring KRS-One; Produced by The Alchemist
The BX is definitely in the house on this one. In what is the first creative reach on this album by Joe; he does a conceptual piece that has KRS acting as his conscience. It’s actually well done and even has Joe praising his elder for being a Bronx inspiration; “I was just a youngin’ on the corner I’m a slinger, you was on the album cover finger on the Nina.” KRS sounds great too by the way.

12. That White
Produced by DJ Premier
Fat Joe does what I think any self respecting veteran NY rapper should do; go get a track from Premier! Nas, Jay-Z, I’m looking at you. What can I say about this track that you already don’t expect from a sample heavy, DJ scratching Premier track? Not a bad way to end the album.

Bottom Line:
As you listen to this album, you can tell Fat Joe is having fun. He produced a solid album that’s sure to have his fans happy. But did he open up or expand artistically? No, and that is something that holds this album back. If you on your eighth album, you still shouldn’t be mystery to your fans or listeners. But, like I said, Joe still having fun, and after over 17 years in the Rap game, that’s saying something.

nappy Picks: “Cocababy”, “Preacher On A Sunday Morning”, “My Concience” & “That White”