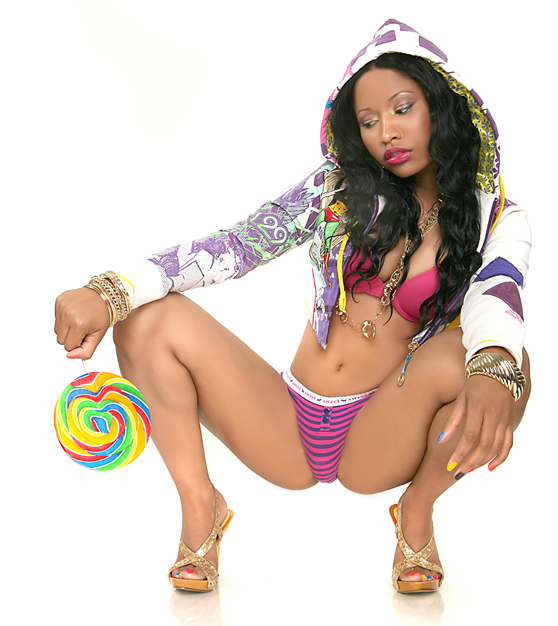 Biggie had Lil’ Kim, Trick had Trina, and now Lil’ Wanye has Nicki Minaj. Speaking of Lil’ Kim, I think my whole interest in interviewing Nicki Minaj might because of Kimberly Jones; well, sort of. If you’re not familiar with Nicki Minaj, you might want to be. As first lady of Weezy’s own Young Money Records, she has made numerous mixtape appearances and recently released her own with Sucka Free. That brings me back to what started this, the ad for the Sucka Free mixtape. Nicki Minaj spread eagle ala Lil’ Kim’s Hard Core ad had the internet going nuts (As well as some other things). Well, after tracking Ms. Nicki Minaj down, I FINALLY got an interview. We talked about the her writing process, the current state of female rappers, and uh, a little about the Sucka Free poster.

B-Easy: What’s up Nicki? Where you at right now?

First thing first, I wanna get this question out of the way. Who came up with the idea for the Sucka Free ad?

My nigga Fendi (President of Dirty Money Records & Founder of the Come Up DVD series). His freaky ass saw my box poking out in some pics I took prior and recommended I redo the Hard Core pose.

Tell him I said thank you Nicki. Nicki Minaj; that’s a crazy name. I heard some stories, but where did the name come from?

It came from my real name which is Maraj. Fendi flipped it when I met him cause I got a nasty flow and I eat these bitches (Laughing).

The first time I actually heard you rhyme on a larger scale, I think it was on Lil’ Wayne’s Da Drought 3. How’d you meet Wayne?

He saw me on the Come Up Vol. 11 and was head over heels for Lewinsky! (Laughing) He made a call and I made the flight!

Being from New York, do you think it’s crazy you running with the Lil’ Wayne? Won’t people think you should be down with DipSet or D-Block?

Okay, okay. Let’s change the subject then. What’s the process you go into when you write your rhymes? Do you write anything down?

Yes sir! I wish I could say I don’t write it down but I damn sure do! Bout to start my own label called “Write Ya Own Raps Records” bitches!

I can’t wait to see that logo. What’s your thoughts on the current state of female MC’s?

It’s missing NICKI MINAJ! But it’s cool; I got the “S” on my chest now. HEEEERREE I COME TO SAVE DA DAAAAYYYYY! (Singing & laughing) Shout out to Mighty Mouse.

Don’t forget Hong Kong Phoey. What’s the feedback from the fans and critics on the Sucka Free mixtape and Nicki Minaj in general?

Sucka Free has gotten great reviews from both fans and critics. I really stepped my pussy up on this one. You can still cop that on myspace.com/nickiminaj for all the non-believers. It comes autographed. So does that fat box poster (laughing). As for Nicki Minaj herself? Somebody always got that bitch name in their mouth, so I guess I’m doing something right (laughing).

Now on Sucka Free, you worked with Jadakiss, Ransom, and of course Wayne. Who else do you wanna work with?

Natasha Bedingfield? Really? If I was to check your iPod, what are you currently listening too? What’s in your stereo?

Leona Lewis. That broad got me right now; she’s dope! I’m big on R&B. I actually sing and write R&B so….

That’s where the money is at right now. Now, I heard the Pinky line on “Wanna Minaj” (“Sex game kinky/Niggas call me Pinky”) and I saw the pictures on you and her on your MySpace page. What’s up with that? You a fan of her work?

(Laughing) That’s cute. I wouldn’t say I’m a fan; I’d give dat bitch a run for her money! (Laughing again) nah, let me stop, I just met her and she’s really sweet. I actually hadn’t met her when I wrote that lyric though. I was just being funny. The actual lyrics is: “Sex game kinky/Niggas call me Pinky/Fuck with the presidents/I am Nicki Lewinsky!”

I appreciate the interview Nicki? Any parting shots?

Shout out to nappyafro.com, Dirty Money, The Famous Firm and of course Weezy F and the whole Young Money! To all the people that support me, thank you from the bottom of my heart! (Kissing sound)