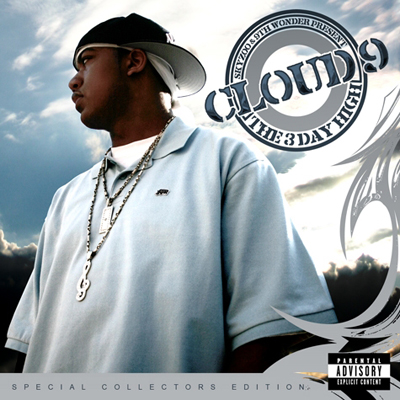 I’ve been gone for a minute but I’m back, and it’s time to pick up where I left off. People have been asking about Rewind Reviews and when another one was going to be done. Well the wait is over and it’s just in time for a fresh batch. “Just let this motherfucker come on, and be fresh.” These are the initial words heard on this album at its start. These words not only describe Cloud 9: The 3 Day High, but the state of Hip-Hop music as it currently stands. The word “fresh” by definition is “not previously known or used; new or different”. Though relatively an unknown artist to those outside of New York, fresh is something that Skyzoo stands by and represents to the fullest. Collaborating with one of the best producers of this generation in 9th Wonder, Skyzoo looks to bring that freshness to the rap game and attract some new listeners and supporters along the way.

Bare Witness
Produced by 9th Wonder
What a perfect way to start off an album as displayed here on the first track. The beat produced by 9th Wonder has a “brand new” or “awakening” feel to it, and it blends very nicely with the lyrics from Skyzoo as he commands the listening audience to pay attention to one of the nicest upcoming artist in the rap game while stating his views on the game’s current status.

Way To Go
Produced by 9th Wonder
This next track literally picks up right where the previous track left off at, with an inspirational and stirring sounding beat from 9th Wonder. Skyzoo does his thing on this track with the lyrics and sounds extremely comfortable over 9th’s soulful sampled production. Sky speaks nothing but truth on this track in telling how these emcees and artists have a long way to go to catch up to the fresh sound he and 9th are providing with this album. This was a great selection for the single off the project. Check out of the music video on YouTube if you get a chance, it’s some nice work.

A Day In The Life
Produced by 9th Wonder
This has to be one of the most smooth, laid-back sounding beats from 9th Wonder that I have ever heard. The feel of this track perfectly complements Skyzoo’s flow and delivery, as well as his swagger, which is pretty much undeniable. As a resident of Brooklyn, his swagger is similar to that of Jay-Z; and what would you expect in being from the same borough? Skyzoo is superb in his lyrics in describing a day in his life and everything it’s comprised of.

Stop Fooling Yourself
Produced by 9th Wonder
I have to admit that when I first purchased this album, I used to skip over this track immediately and not even listen to it. But after I gave it a chance I found it to be a very good track, if not one of the best on the project. 9th supply a dark sounding beat on this track that fits well with Skyzoo’s lyrics and the message he’s saying within his rhymes. I think this is a track that most people can relate to, especially those who claim to be on their grind in the streets doing what they can to survive whether it’s hustling drugs or living the crime life. This song is best listened to when really focusing on what Skyzoo is saying. A lot of people in life need to “stop fooling themselves”.

Come Back
Produced by 9th Wonder
Usually Hip-Hop artists take the corny/cheesy route when it comes to making songs for the ladies or when dealing with relationships, but not Skyzoo. He does a fantastic job of describing his tales with various females in his life and not wanting to commit to one girl until he’s sure she is the one. This song is straight honest and is something that every girl should understand if a guy were to ever explain it to her the way Skyzoo does on this track. He wants to explore his options with other girls, and if his current girl is “the one” then he’ll come back to her in the end. Who could be mad at that?

I’m On It
Produced by 9th Wonder
After a gloomy sounding track, 9th comes back on the next track with a livelier sounding beat. This song is the B-Side of the album single “Way To Go”, and it is something that would certainly fit in the club to dance to. That’s the best part about a track like this from the type of artist that Skyzoo is. He’s able to make a “club” sounding track without having to jeopardize his lyrics or making them sound commercial. It’s something that more artists should try once and a while, and stop selling themselves out for a hit single. Halfway through the album and Sky hasn’t disappointed at all on any track so far.

The Bodega
Produced by 9th Wonder
This song was written from a New York state of mind as you can tell from the song’s title. When you hear or think about bodegas, you automatically think of New York especially if you’re from there or have been there enough times. In sticking with his motto of “what he performs in the booth is strictly truth”, Skyzoo speaks about what he knows in telling about his experience around the NYC bodegas. 9th Wonder supplies a nice beat for this track, but after a while it starts to become boring and repetitive. Nice insertion of a scene from Paid In Full for the intro of the track.

You & Me
Produced by 9th Wonder
Seeing how he took an alternate route on the song “Come Back”, Skyzoo decides to use the normal method on this track in talking about his relationship with a girl. Even though he used the normal method on this track, there are major differences in this track and how other artists’ use it that makes this song that much better. A very nice soulful track from 9th Wonder is one reason why this song is works better and is more enjoyable. Another reason is Sky’s lyrics in how he doesn’t go the corny route, but instead rhymes with truth and conviction.

Live & Direct
Produced by 9th Wonder
On this track 9th switches up things in terms of production adding some horns to the beat. This works effectively, but the short sample that he uses becomes very repetitive and annoying after a while of listening to it. The beat’s somewhat lackluster production makes it kind of difficult to focus on Skyzoo’s lyrics and what he’s saying. This would probably be one of my least favorite tracks on the entire album, and it feels like it could have been done much better.

The Spirit
Produced by 9th Wonder
A somewhat spiritual influenced track by Skyzoo and 9th is heard on this next track. 9th supplys a beat to fit the mood that Skyzoo is trying to portray, but it’s not his best work and just ends up being average production. Skyzoo delivers some nice lyrics, and confident ones if I might say with lines like this: Sky set fire to reps/Flow’ll make you believe, when B.I.G. died I’d quiet his breaths, young’n/My new name is The Flower, cause flow wise no one can see me besides Hova, quote that

Extreme Measures
Produced by 9th Wonder
Skyzoo goes for speaking the truth on this track in displaying his storytelling ability. 9th delivers an average sounding beat on this track that gets repetitive after a while of listening to it. It’s not a good look that these last 3 beats by 9th have only been average and could have been much better. Skyzoo does what he’s supposed to on this track and spits a nice story that’s kind of hard to follow at times, but it works.

Mirror
Produced by 9th Wonder
I ain’t go lie, even though the production from 9th on this track seems pretty simple, I’m feeling the beat the most out of almost any other track on the album. Skyzoo does the beat justice with the lyrics he delivers about all of these copycat emcees in the game and how a lot of them mirror his style along with other established artists in the genre. The hook on this track is kind of corny, but it’s sufficient for what it’s worth. This was a nice way to end of the album and it brings it to a close in good fashion, leaving you waiting for the next project from the two.

Bottom Line:
After 12 tracks from the collaborative effort of Skyzoo & 9th Wonder, it’s safe to say that they brought some much-needed freshness to the rap game and industry in general. You will find this album to be a “breath of fresh air” in a heavily polluted industry similar to recent albums like The Bake Sale (The Cool Kids) and The In Crowd (Kidz In The Hall). The only difference between this album and those projects is that this album carries are more East Coast feel with Skyzoo being a Brooklyn native, which those other two album have a more “Hip-Hop/80’s/Nostaglia” feel to it. Seeing as how Skyzoo & 9th Wonder put this project together in a total of 3 days hence the album’s title The 3 Day High, they have done better than what most artists fail to do 6 months or years in producing an album. Skyzoo worked magic over some of 9th’s leftover/rejected beats from other artists he’s worked with like Little Brother, Jay-Z, Destiny’s Child, etc. Listeners can’t go wrong in purchasing a copy of this album, whether it’s on CD or from iTunes (which I did). You will ultimately be delivered with some good Hip-Hop music and a much-needed change in pace from a lot of what’s dominating the game nowadays. Skyzoo is one of the talented upcoming rappers in the game that’s really keeping it real and truthfully, so support him now and don’t be one of the many who decides to jump on the bandwagon once he starts to see some success in the industry.