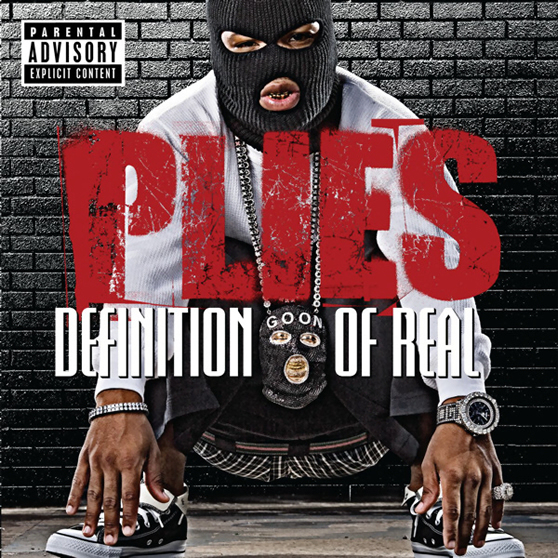 By dropping his second album in ten months, Plies looks to capitalize on the recent success of his “Gunshine State” partners. Last year Plies struck gold with his debut The Real Testament, but he’s back with Definition of Real looking to pick up where he left off. His big single last year was “Shawty” this time around he’s keeping the ladies loving him with “Bust It Baby Part 2”. Will this be enough to get another plaque? Let’s see.

I’m Da Man
Featuring Trey Songz; Produced by Drumma Boy
Plies starts this one off for the goons, good beat, tough talking, and then Trey Songz supplies the hook. Citing Trey’s recent run-ins, he fits well with Plies on this track. Good start to the album.

Ol’ Lady
Produced by Necronam
This is my favorite song on the album. Plies is that dude! This song is GANGSTA! Peep what he says, “Nigga claim he don’t like me, but it’s all gravy, keep playing with me, and I’m fuck your old lady!” HEAR IT FOR YOURSELF!

Bushes
Produced by Midnight Black
This is another one for the goons. Plies gives us another tale about hiding in some bushes waiting for his victim. I don’t advocate what he’s talking about, but it’s a good song, something you’ll hear bumping in the hood.

Worth Goin’ FED Fo
Produced by Bryan Tyson
The beat on this one is kind of boring, which hurt Plies, because his lack of rhymes. I like the hook, but the rest of the song isn’t interesting at all. I’m going to have to say SKIP on this one.

Dat Bitch
Produced by DVS
He made this one for the strip clubs, notice the hook; “Just hit me a lick, finna blow a check, got stacks on me, goons on deck, finna slide through the strip club and make a mess, I don’t want that hoe, I want that bitch!” I couldn’t have said it any better.

Somebody (Loves You)
Produced by Rodnae
Patti LaBelle and Plies on a song together? Nah, just playing, but he does lift the hook from her. I can’t front on this one, I kind of like it. Plies is getting deep on this one, no not really, but he’s doing him.

Feel Like Fuckin
Produced by Bryan Tyson
Songs like this one is what makes me call Plies the male version of Trina. “I got a taste for some pussy, I feel like fuckin.” Yeah, he gets gutter on this one, not your usual Plies gutter, but Trina gutter. Check the way Plies says “pussy”; he makes it sound so nasty.

Watch Dis
Produced by Drumma Boy
I could’ve sworn that T-Pain did the hook, but it’s not him. The beat is supplied by Drumma Boy and is what Plies needs to disguise his redundant lyrics. But this one is has single written all over it. CHECK FOR THIS.

Who Hotter Than Me
Produced by Midnight Black
This is another one for the goons! The beat is tight and Plies is doing what he does best, talk smack. Is he the hottest in the streets? I let you decide that. It’s still a good song though.

1 Day
Produced by Bryan Tyson
We got a touching song from Plies on this track. You got to feel the dude on this one. If you have lost somebody to the streets, then you will feel this song. I can’t get mad at him for this one.

Bust it Baby Part 2
Featuring Ne-Yo; Produced by J. R. Rotem
You’ve heard this song, seen the video, and the ladies love this song. Amazing how Plies has turned a phrase into a new single and an upcoming reality show with the same name. WOW! Do your thing Plies.

Shit Bag
Produced by Bryan Tyson
Another goon song, this time Plies is talking about hitting somebody to the point where they need a “shit bag!” Not very lyrical, but he gets his point across.

Please Excuse My Hands
Featuring Jamie Foxx & The Dream; Produced by Frank E
Plies takes it back to the ladies on this one. He jacks 90’s R&B group Silk on this one. I don’t really like it, but I’m sure some of the ladies will.

Rich Folk
Produced by Pentagon Productions
Plies tells us all that he wants to come up and live like rich folk. I like the message, but Plies gets redundant after a while.

#1 Fan
Featuring Keyshia Cole & J. Holiday; Produced by DJ Nasty & LVM
Plies pulled out some big R&B stars for this one, but it still doesn’t work for me. I guess dudes will be walking up to girls saying this now. I guess you have to be a “bust it baby” to answer to that.

Bottom Line:
Plies stuck to his formula and produced another decent album. For some reason, I feel like this album was aimed at the ladies, but it does have songs for the guys. Plies subject matter gets redundant at times and you wonder when he will ever talk about anything else. But why should he? He has a gold plaque, and if he keeps it up, he might have another one. Plies doesn’t stray from what got him to this point, and I don’t think he cares or his fans.