Turn Yo’ Headphones Up: Her Mic Sounds Nice 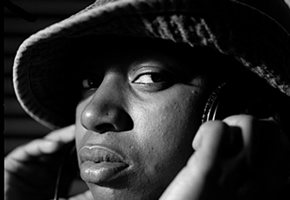 In case you don’t know by now, Saule Wright loves the ladies…that doesn’t stop when he’s thinkin bout hip hop.  Outside of the disappointing Foxy album, only the official release of Jean Grae’s album, Lil’ Mama’s surprising album, and Nicki Minaj’s mixtape have caused ripples in the femcee game.  To get your fix, let’s dig in the crates and see what albums we find.

First on the list is Bahamadia‘s Kollage is typically the album folks mention when they think of her.  But have you heard her 3rd album?  Good Rap Music is a heavily slept on gem from Philly’s finest Femcee.  The album is a lot more personal than her other CDs and she delivers that personal touch without much sacrifice.  Standout songs are, ” Good Rap Music”, “Glory”, and “Culture Cat”.

Heather B, yes that Heather B, did a follow up album to Takin Mines titled Eternal Affairs.  Once again, Heather gets a lot more personal on here, and that’s by design.  She explains on the album that she had no plans to do this album, but after a myriad of personal issues, she thought that maybe she needed to do this for someone else benefit.  Her love for the craft is evident all through the album and most prevalent on “A Live MC”.  She rips the alphabet from a to z with actual lyricism…this is not just a gimmick song.

5 o’clock in the morning where u gonna be?  Nonchalant blessed us with this hook on a song by the same name on her Until The Day offering.  Have you actually listened to the album though?  This album features a lot of R&B inspired tracks that help to create an album that may have been a little ahead of its time when released.  Other songs you may have forgot about on here are “Lookin’ Good To Me”, “Crab Rappers”, and the title track, “Until The Day”.

Now, for my hardcore thug rappers, be sure to check out Champ MC‘s Ghetto Flava.  From my knowledge, none of these songs got any commercial love, but if you like gangsta ass music, don’t let the fact the champ is a woman fool you, this shit ain’t no punk.

Similar to the last CD I mentioned, AMG’s sister, The Boss, blesses us with Born Gangstaz.  We all should remember “Deeper” and “Recipe Of A Hoe” from the radio success…if not that, Jukebox TV had them on constant rotation.  Don’t sleep on “Process of Elimination” and “I Don’t Give A Fuck” which knock even harder today than they did when originally released.

RIP, Lisa “Left Eye” Lopez much hyped but seldom heard solo debut, Supernova is another album you need to cop…if you can find it.  She let’s us in on some of the turmoil she had with the group as well as a track with Tupac.  Her sound is really unique and even though she doesn’t really shed her clean image, she did a great job as establishing herself as a serious emcee.

Now there is no way for me to end this list without mentioning Da Brat, one of the best femcees to ever do it.  Anuthatantrum shows what JD can do when he is on his shit with the production.  Although Funkdafied is the album that put her in the Hip-Hop history books, this album really proved her greatness.  I play this album at LEAST once a week.  Now, back in the day when I would partake…this was THE album to play as the mellow vibe and constant talk of the Naturals are the perfect vibe to break out Billy Bong Thornton.

I didn’t mention Lyte or Roxanne because their albums tend to be the standards.  Sure there are some that maybe could have been mentioned, but this list should give you more than enough cause to Turn Yo’ Headphones Up.