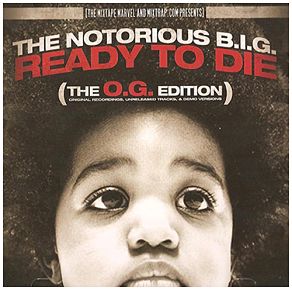 At first I wasn’t gonna post this when we first got this in our e-mail on Friday. But as the weekend commenced I had this feeling in the back of my head that I really should have. Shit, I may believe that Jay-Z is the “Best Rapper Ever” right now. But for a long LONG time, I would steal on a motherfucker if they said Christoper George Latore Wallace wasn’t the best to ever do it. So, Biggie I’m sorry I didn’t do what I was supposed to and post the original version of Ready To Die on Friday. I’m sorry that I let my physical urges (and the chance to release them on a sexy caramel toned beauty) get in the way of real Hip-Hop. But B.I.G. even though I’ve wronged you and Hip-Hop, I know that deep inside you would have did the same thing too. So people, if you haven’t already got this, do so and sit back and listen to Ready To Die again for the first time. You hear some samples that wasn’t cleared, some production from Premier and Pete Rock that wasn’t on the original, and hear what Biggie and Bad Boy initially intended. I still don’t know how this shit is just getting out know. R.I.P. Big Poppa!

Download: The Notorious B.I.G – Ready To Die (The O.G. Edition)