Boomin’ From The Stoop: Synesthesia 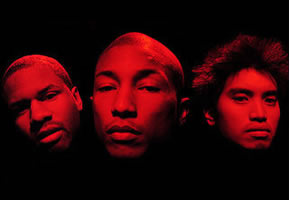 Welcome to another edition of Boomin’ From The Stoop with ya’ boy H20! For all the newcomers out there, its when I talk about what I’m currently boomin’ from my stoop! Last time I hit you guys with Freeway’s insane underground game, but now I’m gonna show some love out there to N*E*R*D, a band with frontman Pharrell Williams and Chad Hugo of the Neptunes, with Shay Haley. N*E*R*D is infamous for its funky sounds and songs that push the border as far music goes, but this album they dropped is ridiculous! It’s full of sonic songs that are for everyone.

N*E*R*D’s album, Seeing Sounds, came out on June 10th, the same day as Weezy’s album which ALMOST went Gold that same day, so I’m guessing many of you out there don’t have this album because you’re STILL bangin’ Weezy. That’s cool; Tha Carter 3 was hot, we all know that. But don’t overlook an album like this one! It’s based off the disorder of Synesthesia, where people actually see things when they hear things, or See Sounds. As far as musical quality, Pharrell hits us with the falsetto, Chad produces, and Shay even spits some bars!

So, to convince all the Weezy fans out there that they may have actually slept on a good album AND that Tha Carter 3 isn’t the most important thing in the world, I’m putting out my favorite track out there from the N.E.R.D. album, Seeing Sounds. It is”Love Bomb”. “Love Bomb” is…well, to be honest I have no IDEA what’s it about, but its such a great track. Check it out these track, I keep it on repeat a lot nowadays. Once again, you’ve been treated with this track straight from The Stoop!