Song of the Week: Rick Ross feat. Pharrell – “Get Down” 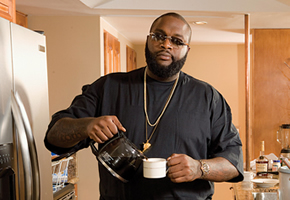 After debuting at #1 on the Billboard with Trilla, getting voted 4th place in MTV News’ “Hottest MC’s In The Game”, and going Gold when most rappers these days can’t sell 100,000 albums, Rick Ross wants more. Who knew that after all the success that Rick has gotten this year, he would plan to drop another album in the 4th quarter of 2008. It will be named Deeper Than Rap and while I doubt it will actually come out this year, Ross promises, “I’mma give them my life, the streets and give them the game on this one”. The first taste? Rick Ross hooks up with Pharrell on “Get Down”. I don’t know about this combination but it’s kinda catchy. Enjoy.